Let’s look at the numbers: this is the fourth ‘Third Wave’ book to be released this month, the thirteenth book in the “Batman” group of books, the third DCnU book to be at least co-plotted by Scott Snyder, and the first book since the New 52 began to introduce a new creation as the main character. 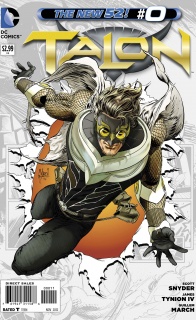 – A new series featuring the Court of Owls’ unstoppable killing machine! – Meet Calvin Rose, the only Talon ever to escape the grasp of the Court of Owls. This former assassin just wants to live a normal life…but that’s impossible, since he’s being hunted by his former masters!

“Talon” is a result of ‘the Court of Owls’ storyline from Snyder’s “Batman” run, but isn’t exactly a spin-off. “Talon” introduces Calvin Rose, one of those recruited by the Court of Owls to be a Talon (one of their assassins), but he escapes, and is living on the run from them, while trying to stop them. This is a premise that could be a lot of fun if done right, or could grow pretty dull if it simply becomes a one on one battle, a sort of “Spy Vs. Spy” set in Gotham City.

It is hard to judge the intent of the series based on this issue because it is so clearly an origin/set up issue, and not even in the way that “Sword of Sorcery” or “Team 7” was. Both of those books set up a very clear premise, and it is up to the subsequent issues to build on the groundwork that was laid by the #0 issue. But here, Talon hasn’t donned his costume we see on the cover yet, and all we know is “former escape artist turned Talon leaves the Court of Owls and is on the run.” Beyond the overarching motivation to stop the Court of Owls, there isn’t really much to do except speculate as to where the series might go from here.

The most interesting bit of speculation is going to be how much the series will tie in to the greater Bat-universe. Unlike “Batwing” or “Birds of Prey,” there isn’t a member of the Bat-family who connects the book back to Batman. Yes, they share a common foe, but while the Court of Owls is one card in Batman’s rolodex of villainy, they appear to be what Talon is all about, all the time. Plus, the Bat-books seemed to have moved on from the Court of Owls – will Talon even run into Batman for awhile?

In a way, it is good that the book is given its own little corner of Gotham in which to carve out a space. It will let Tynion and Snyder plot out a course for the book which, hopefully, will give it some solid legs to stand on before jumping right into the fray. The solicitations through #3 don’t mention Batman, and that is a good thing for the book but, potentially, a bad thing for sales. I think the Snyder name and the Court of Owls connection is going to be enough for the first few months to let the book find an audience, if out of nothing but loyalty.

What folks should be buying the book for, however, is the artwork by Guillem March. His work almost reflects that of Greg Capullo on “Batman,” fluctuating between very detailed horror-ish images and more loose, animation-inspired characters. The balance is what makes the book really work, as the heart of the titular character is on display while around him is the heinous organization. March especially shines in the flashback sequences, where Rose as a child is indoctrinated with the Court’s misleading mission statement to eliminate Gotham’s “rats.” Tomeu Morey’s colors help to give the book a distinctive palet of browns and greys which suggest, but never ape, the black and grey Bat-tones.

What the thematically similar art, as well as what Tynion and Snyder do with the plot, is line up the book as something that has tangential connections to the Bat books without overdoing it. Through the Court of Owls, there is a Haley’s circus connection, and through Gotham, an obvious Batman connection, but nowhere in the book are the typical tropes of a Batman story. There doesn’t appear to be an Alfred-like figure (like we’ve seen in “Batwoman” and “Batwing”), there isn’t an overtly detective-y, collecting clues vibe (like this month’s “Teen Titans” or “Batgirl”); this is a Bat-ish book, not really a Bat-book, except that it feels like a specific Bat book; it feels like Snyder’s “Batman.”

Now, Tynion might wind up the sole writer of the book (I can almost guarantee that after the first arc or maybe two), and at that point, the connection might feel even more tenuous. But by pairing a young writer with an established talent, on a book that is a new character playing in a familiar world, DC might have a good formula on their hands – one that Marvel has been doing quite a bit of lately (see the work of Cullen Bunn, for instance). The premise, talent, and marketing of the book are setting it up to succeed, which sounds obvious, but really isn’t. How many people really thought that “G.I. Combat” was going to be a winner? Who in the DC offices was really fighting for “Mister Terrific?” Some books come out stillborn, and some are great in concept but bothed in the execution. And some look a lot like “Talon” – a well thought out gamble, with the odds in its favor.

A common theme among us baseball fans who care a lot about advanced metrics and sabermetric statistics (hi, fellow nerds!) is the concept of rooting for good process – you’d rather a team have a set plan and execute that plan through to its logical conclusion as opposed to being emotional about its decision making. That is also my hope for DC that, after a few years of poor process, that the powers that be might be able to execute a plan that makes sense without being overly quick to change direction and play to the whims of either the executives or the fans in the short term. DC has set this book up just about as well as it can; now, it is up to the creative team to deliver a book worthy of the process that brought it into existence.