Four Robins, four origins. “Nightwing” was a fantastic issue; “Red Hood and the Outlaws” wasn’t worth the paper it was printed on. Where would Tim Drake’s origin fall? Be warned that there are some spoilers about the issues are found herein.

– Focusing on the origin of Tim Drake; how a would be Olympic star and computer genius went on to become Batman’s third Robin.
– Plus: The beginnings of Skitter and Bunker.

With the exception of “Nightwing,” the Robin-centric #0 issues have been a classic case of overcomplicating origins. There was a certain elegant simplicity to their origins: Dick is an orphaned acrobat that Bruce takes in, Jason is a delinquent Bruce tries to straighten out, Tim is such a natural detective that he solves the “who is Batman?” riddle, and Damian is his son. Each was different, and each origin really set up the character’s personality. Most of all, Tim’s origin set him apart from Dick and Jason in many ways, as he was the first Robin to choose the life of a crimefighter out of a desire to be great, and not out of personal tragedy.

And while “Teen Titans” #0 doesn’t fundamentally change who Drake is, it adds a couple of layers of shellac to what used to be a pretty straightforward tale. In a universe where most characters were de-aged, Tim is aged up to a high school student when he is on his quest to figure out who Batman is. This is obviously done to heed the hilariously compressed “5 years as Batman” timeframe, as well as establish Drake as his current 16(ish) year old self in “Teen Titans.” While this is certainly a more realistic scenario than the “9 year old kid solves Gotham’s greatest mystery” one espoused in the old continuity, Robin used to be an avatar of innocence and hope. So by making him a teenager, some of that wide-eyed awe will be gone.

It is very hard for this not to become a “old origin vs. new origin” review, in part because Drake’s original origin is a personal favorite, as well as an amazingly well-structured and thought out one. This one, on the other hand, seems like trying to course correct his origin to fit in the New 52 timeline, whether or not it makes sense or improves the story. In fact, I don’t think too many people were unsure of Drake’s origin in the New 52 – he lays it out pretty well in “Teen Titans” #1 – oh, wait. There Lobdell calls him Robin, as did Peter Tomasi in “Batman and Robin” #10 and Scott Snyder in “Batman” #1, unlike here where he was always known as “Red” Robin. In fact, DC has changed the text from “Teen Titans” #1 to eliminate the suspect dialogue for the collected editions.

For reasons never explicitly stated, writer Scott Lobdell has been on a crusade the last few months to erase the notion that Tim Drake was ever called Robin in the New 52. Never mind his place as a legacy character, or the fact that adding “Red” to his name was a sign of stepping out from Batman’s shadow while still holding ties to his past, this was the way Lobdell wanted it to be. While I am rarely in favor of editorial control trumping creator ambition, this seems like a classic example of a writer wanting to do something that hurts the overall product, and this is exactly where an editor should step up.

Regardless, this issue does about all it can to clearly state Drake’s new origin, while establishing him as both an athletic and academic superstar, in addition to being a great son. Drake’s parents are given a bit of time here too and they, for all intents and purposes, seem like genuinely good people. There tends to be a trend in comics to make parents either bastards or saints, with the latter typically offered up as sacrifice to the origin gods. That doesn’t quite happen here, but there is a significant bit of plot sleight of hand to get them out of the picture without making Tim another orphaned sidekick.

The biggest problem with this issue, besides old man continuity grumbling, is how Batman is portrayed throughout. The gruffness doesn’t seem out of place, considering this is not too long after burying Jason Todd, but the elaborate plan to throw Drake off his track seems like time that could’ve been better spent. Batman creates not only a fictional person, but a fictional corporation, places information on the internet and leads Drake to a meeting at the Gotham Aviary (cute). While it makes sense that all potential unmaskings need to be dealt with, this seems like a solid week’s worth of work when, you know, ladies are getting raped and gang members shot all over Gotham. It also goes against one of the most important aspects of the Batman mythos – his obsessive, almost mentally ill focus on stopping crime. While protecting his identity is important, stopping crime is more important. I know in 2010 (or whenever this is supposed to be), there can be a Google alert set up for “batman + secret identity,” so Bruce doesn’t have to do quite as much legwork, but this still seems like a lot, especially considering the whole masks things. Oh, I didn’t mention the masks? He and Alfred don old men masks and go to see Tim do high school gymnastics. Because, you know, why not?

(Also – after changing out of the old man asks – in a car, Bruce opts to put on the Batsuit. I know tinted windows are awesome and all, but holding the cowl in your hands as you look out of a window seems like pretty amateur Batmanning)

Non-solicited artist Tyler Kirkham does his usual work here, which is to say he handles things pretty well. I know Kirkham has his fans out there, but his work always feels lacking to me. Part of that is weird attention to detail, especially since the detail so frequently is wrong or feels off. Take this for instance:

I know that we don’t know Drake’s religious affiliation, but it seems like his mother is reading a left to right, Hebrew text-style magazine printed in English. Kirkham also really likes to draw stubble, as Kyle Rayner was perpetually unshaved in his “Green Lantern New Guardians” run, and how Bruce is rocking some 5 o’clock shadow under the cowl as well. While some artists, like Frank Quietly or Nick Pitarra, use a focus on detail to their advantage, Kirkham’s attention to detail comes at the expense of the larger work. Why take the time to draw stubble on someone’s face when the main image is oddly proportioned, or the mug the stubble is on is constantly scowling instead of showing emotion?

The weirdest part of this book, however, is the reveal that Drake is an assumed name to protect him from the Penguin’s wrath after hacking into his bank account. We are never given Drake’s birth name, so the implication is that his parents’ last name is either totally superfluous or will be revealed to be totally! important! to! everything! The latter seems more likely, especially because “Drake” was clearly set out as his name before his new origin, so the only reason to change this to an assumed name, without revealing his birth name, is to make his real name a big payoff down the road, right?

And finally, in the never ending saga of “misleading solicits,” the “origins” or Bunker and Skitter are presented in their entirety below: 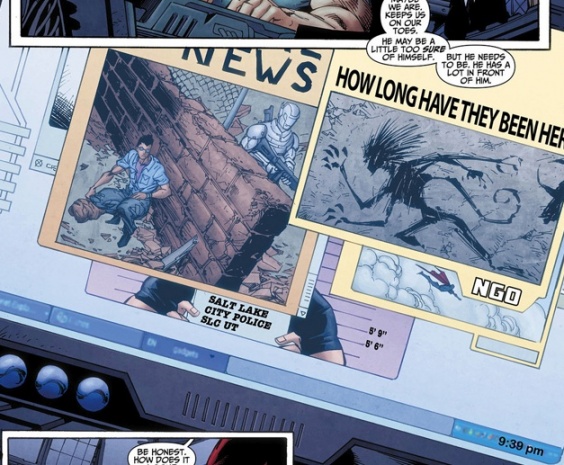 We know so much about them now!