The return of Joe’s Comics took a lot of folks by surprise, but many more expected the comics to be announced and either never come out, or come out far later than expected. However, promised in 2013 and arriving in 2013 is “Ten Grand” #1 – believe it or not, this shit is real. 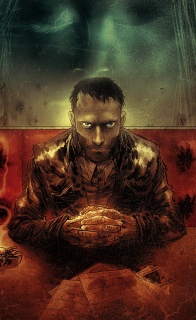 Joe Fitzgerald was a mob enforcer until the day he met Laura, who convinced him to leave that world behind. Before quitting, Joe agreed to one last job, little realizing that the man he’d been sent to kill was deeply involved in demonlogy. He survived Joe’s attempt and came after him, fatally wounding Joe and killing Laura. As he lay dying, an angelic force (who may or may not be what she appears) pointed out that where she is going, he can’t follow, and where he is going, he wouldn’t want her to follow. But if he will agree to work for them as a different kind of enforcer, they will bring him to life and keep on bringing him to life every time he is killed in a righteous cause. The reward: for those five minutes of death, he will be with Laura again. Would you endure an eternity of pain and death, dying over and over, to be with the woman you love for just five minutes each time you died? Most people might say no. But Joe Fitzgerald isn’t most people.

There are few creators who can polarize a room quicker than J. Michael Straczynski. JMS is a guy who inspires both fierce loyalty and horrified shrieks, sometimes from the same readers. For every die hard fan of his “Thor” run, you’ll find someone shouting “GROUNDED” at you from a moving car, while they’re chucking an empty soda can at your head. Having recently done some actual, honest to goodness great work on “Before Watchmen: Dr. Manhattan,” as well as making a legit blockbuster with “Superman: Earth One,” his return to creator owned comics comes at a fertile time creatively and commercially.

“Ten Grand” has a fairly standard plot, with a fairly standard leading man. Brooding, quiet, loyal Joe Fitzgerald could be the poster child for the gruff on the outside, softy on the inside anti-hero that populates so many comics today. What JMS is able to do, through his considerable skills with the English language, is to take some of the more perfunctory ideas perpetuated throughout the book and dress them up in ways that makes them feel fresh and novel.

But even with that Straczynski charm, there are still a few too many cliches in place here for comfort. The solicit tells the plot just as well as the comic does, and that is a problem. The “adult comic” checklist is pretty accurately checked off here: stripper, dead love, dive bar, piercings, weird haricuts, cigarettes. There are tropes upon tropes here, and while nothing in the issue is offensively bad, or even offensively bland, it is just that nothing on the written side of things is anything to write home about.

And that is a shame, because Ben Templesmith brings all of his considerable gifts to this project. If the name isn’t familiar to you, well, it probably should (Image’s “Fell,” IDW’s “30 Days of Night”). His work is stellar all over this book, and the fact that he pencils, inks and colors the work really shines through, as the rich work appears to have no boundaries in its construction. His work reminds me, in a way, of Francesco Francavilla’s, even though their styles are quite different, because of the brazen way the colors interact with the figures. Few, if any, outside colorists would take the approach that Templesmith takes here, as it would be seen as intrusive or presumptuous to splash color around and let said colors set the tone so effectively.

Through Templesmith’s art, usually dull settings like dark rooms and strip clubs pop off the page and feel like real, lived in places, and the characters seem at home in them. The most effective part of this book is that it is set in a world that appears perfectly lived in and inhabited. From the main characters to the skeezy dudes on the street, everyone is drawn in such detail as to suggest an interior life and history that would be worth looking at, if only the camera were to pan that way.

And while it may be fun to look at these characters, there still should be more there. JMS plants lots of seeds here that, so far, appear to be playing out exactly as you’d expect them to. However, there is room for growth all over, and hopefully this first issue’s goal was simply to set the tone and pace for the series, and then #2 really kicks the story into high gear. If not, this will be a slight but enjoyable work that doesn’t hold a candle to what either creator can really do.