Jim Starlin and Ron Lim party like it’s 1991 with the new “Thanos Annual” #1! Come read our review of this comic about the Mad Titan below! Mild spoilers ahead! 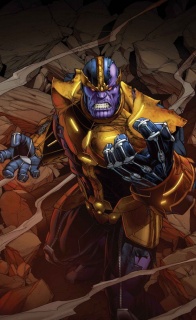 • Jim Starlin returns to Thanos, and he’s brought INFINITY GAUNTLET artist Ron Lim with him!
• Thanos must face Mephisto, his future self, the Avengers and more!
• Learn how a devastating defeat in Thanos’ past set events into motion that will redefine the Marvel Universe in the near future!
• A prequel to the upcoming THANOS: THE INFINITY REVELATION original graphic novel!

You know how modern comics storytelling is really decompressed and, as entertaining as some contemporary comics are, move at a slow pace?

Jim Starlin and Ron Lim don’t give two tough titties about what contemporary comics think. They came to recap what Thanos is all about and chew bubblegum. And they just inhaled some stuff in a bag they found behind the local Radioshack dumpster.

I’m not entirely sure what to call “Thanos Annual” #1. It’s certainly not an origin story since Thanos is right in the middle of his quest to conquer the world, but on the other hand he is going through his life and all its key moments. Yet on another, completely different other hand, I can’t call it a recap because all of those moments come at a rapid-fire pace from Thanos’s ghost from the future who isn’t actually a ghost but a manifestation of the Time gem and–

Okay… deep breaths… let’s reel it back a bit.

“Thanos Annual” #1 is a prequel to the upcoming “Thanos: The Infinity Revelation” graphic novel coming out this summer and its creators, Jim Starlin and Ron Lim from “The Infinity Gauntlet”, have made this annual as a boilerplate for all you need to know about their version of Thanos. On the surface, it doesn’t work. All the events that get brought up are presented with little context. Stuff like Drax’s transformation from hilariously oversized guy with a tiny yaoi head to WWE’s Batista, or even Thanos becoming pregnant and gaining a large head is explained with a “YES THAT HAPPENED”. If I hadn’t spent my cousin’s confirmation party going through Wikipedia pages on Cosmic Marvel characters like Eternity or Adam Warlock (or, you know, read these comics), I would’ve assumed that I hadn’t purchased a book but instead the mad ramblings of someone who is trying to whisper the secrets of the universe to me behind a Baby Gap dumpster.

While I have little idea what’s happening in the plot itself (I think they go back to prehistoric times? Like, for no reason?) and the “This Is Your Life!” segment that Thanos hosts for himself is maniacal at best, Starlin excels at revealing the greater truth behind the character of Thanos. Strip away the fights with The Avengers, strip away the T-Rex hanging out, strip away the Antebellum Ball apparently being held on an alien planet and you’ll find a pretty good study of who Thanos is. The first thing, the very first thing, he does when meeting a convoluted ghost of his future is wrestle it to the ground so he can gain control of the Infinity Gauntlet (that I think is just a projection and not even the gauntlet itself). This is, without a doubt, The Mad Titan: a dude who will betray even himself in order to control the universe, wipe out life, and be with Death. The dialogue is all very grandiose and may not be what most readers are now accustomed to but Jim Starlin does excel when it comes to maniacal declarations and whispered conspiracies.

Similarly, Ron Lim’s art definitely feels like a throwback but not in any particularly archaic way. This art definitely places the story somewhere around the late 1970’s/early 1980’s but not in any way that feels obsolete.  “Thanos Annual” #1 feels like its on the largest budget given to a comic in recent memory, with dimensional travels and mind-glowingly cosmic beings floating in and out at a rapid pace. Lim works on a grand scale that gives this one-shot a grander presence, more significance. Plus, there are some genuinely gloomy moments from him, notably the last scene on the Earth’s moon which hints towards a forthcoming event that would probably dwarf “Infinity”. Plus, all of the complexity I mentioned Starlin giving Thanos would not be even remotely evident without the subtleties in Lim’s rt. There’s one particular segment, revolving around the scene I mentioned with Thanos attacking himself, where the idea comes to life in the young Thano’s head that completely sells the moment.

I’m not sure what the audience for “Thanos Annual” #1 is. I enjoyed it a lot but if you give me maniacal characters, time travel, and the phrase “To court utter destruction of both BODY AND SPIRIT!” I am good to go. If you’re new to Thanos’s canon and want a better introduction to who he is, then Aaron and Bianchi’s “Thanos Rising” is honestly a much better place to start. If you’re a big Starlin and Lim fan then you might enjoy this better, although most of it is just a “Best Of” montage meant to set up that upcoming “Inifnity Revelation” graphic novel.

However, if you enjoy pure comic storytelling, the type where there’s no limit in scope save for page count, then you might want to check out this annual. Honestly, “The Infinity Revelation” was something that was going to slip entirely under my radar but with this comic, I am now compelled to see what Starlin and Lim have cooking.

Final Verdict: 7.3 – Browse. It’s definitely a lot of fun but maybe not for everyone.