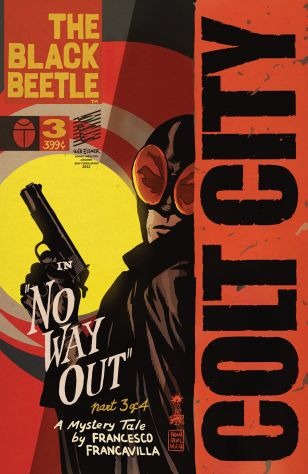 Black Beetle? More like ORANGE Beetle, am I right? 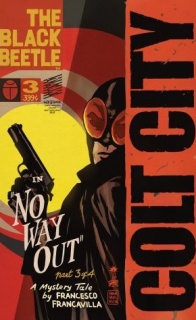 Written and illustrated by Francesco Francavilla

Under the watchful gaze of the mysterious Labyrinto, Black Beetle fights for his life! Is this the doing of a man that Black Beetle thought was dead? Could a zombie mobster be commanding the foes of Colt City’s dark avenger?! If he survives the night, the investigative insect will be left with questions to ponder as he takes his investigation . . . to the morgue!

Francesco Francavilla is a creator whose love for comics and the artform is palpable in his work, even when he’s working on characters as disparate as Batman and Captain America. The guy exudes an adoration of the medium, and when he’s working on a project like “The Black Beetle,” something that is a passion project and a creation entirely his own?

Forget about it man. This guy is on it.

“The Black Beetle” from page one, issue one has been a rock solid pulp story that emulates all of the best elements of the genre without being a slave to them. He hits all the tropes we want to see – I looooved the scene where The Black Beetle, in disguise, meets the chanteuse of his nemesis’ club – while modernizing them and making them work all the better in this form.

One of the things he does best is uses the narration of the lead to create a mood and atmosphere that is simultaneously a reminder of yesteryear while being remarkably timeless. When The Black Beetle drops lines like “I had a coupla things, but you made me forget them, sweetheart” you’re transported to a time and a place where lines like that not only worked, but were the envy of every red blooded male looking to woo a woman so divine.

Francavilla’s gift with the dialogue and atmosphere of this world is only surpassed with his art, which is unsurprising considering that’s the craft we know him for. Handling all aspects of the story supercharges Francavilla’s art, especially in sections that marries the two aspects in innovative ways, like in the first three pages. The first finds the music and lyrics of the song Miss Ava Sheridan is singing brought to life in the story and the storytelling, while the latter is an absolutely killer splash page that lays down the scene and environment we’re drinking in. It’s spot on and a wonderful open to the issue.

One other thing that I love about his art is the imperfections he allows. Some artists would work over pieces over and over and over until they perfected (in their mind) what they are trying to do, but little elements like the stylistic beetle flourish at the end of the “Intermezzo” section finds Francavilla bringing a ton of personality and unique style to the page simply by leaving that beetle just a little loose.

If I had to find one thing to bring this issue down on overall, it’s something my 4 Color News and Brews co-host Brandon Burpee pointed out that I have a hard time not noticing anymore. No matter what he’s working on, Francavilla overloads his pages with orange. It’s the most peculiar thing, and while it has become a signature of his art, there’s a certain point where the unnatural hue takes me out of the story. It’s something I’ve long been curious about, and it unsurprisingly is prevalent in this book as well.

But it’s a small complaint in a book that has oh so much going for it. Francavilla is one of the most gifted storytellers in comics, and “The Black Beetle” is a passion project that finds him at the top of his game. It’s an absolute blast to read, and something I hope we see much more of after “No Way Out” wraps next month.