The end times are so hot right now. And by right now, I mean all throughout literary history. The idea of the end of the world is a concept so foreign, final and hypothetical, with such rich built in imagery, courtesy of the book of Revelations and other pieces of apocalyptic literature. “The End Times of Bram and Ben” #1 serves as the prologue to a larger story about the literal end of the world; here, we get the rapture and some hints as to what the afterlife looks like. 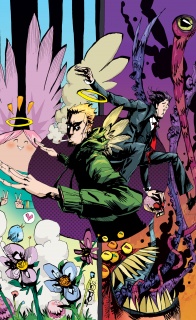 What would you do if you were caught in the Biblical End Times? When Heaven raptures total bastard Bram Carlson in a “clerical error” – he’s sent back and immediately uses Armageddon to his benefit! Can his anxious roommate Ben save Bram from himself – AND the gathering forces of Armageddon?

I’m pretty sure Ricky Gervais or Christopher Hitchens, deep down at their core, would be thrilled to learn that there is a heaven, where good people, including their loved ones and mentors, get to live for eternity free of pain. Theologians have described heaven any dozens of ways over the past two millennia, and just about no one really believes it to be the winged, cloud lounging utopia so frequently suggested on television and movies. But just about all descriptions of heaven (minus what Billy Joel thinks, apparently) have one thing in common: it is a good place to be.

That is the main thrust behind this comic. Bram has been to heaven, and he wants little to do with it. He describes everyone there as a fat, naked, ugmo which, I think we can all agree, are not exactly the ideal people to be palling around with eternally. The idea that heaven would be anything short of heavenly sort of throws a wrench into the plans of everyone who plans on retiring to heaven after their time on Earth is up. I think, for many, the idea of a shitty heaven is worse than the idea of no heaven at all. That is certainly how Bram sees it, as he wants nothing to do with eternal “happiness,” and instead comes back to Earth to continue to be a dick.

Because he is such a dick in all the interactions he has throughout the issue, it could be easy to decide that heaven is just fine, and the problem is with Bram. But, as the tail end of the issue shows, Bram is actually correct, and heaven has a nefarious undercurrent led by…well, that would be spoiling things. What I can say is that this book takes a once-revolutionary but now expected trope, the unreliable narrator, and inverts it. Bram is telling the truth, but is such a fuck up in life that his words ring false.

Because Bram is such an obnoxious sort, Ben seems sort of dull by comparison. This is a casualty of the extra-charming second lead. Think of how mopey and whiney Dante seems compared to Randall in Clerks? That is very much the Ben and Bram relationship. Bram has crazy friends, almost no moral code, and the mouth of a long shore man, so Ben appears to be near saintly even though he’s probably just a normal dude. Ben seems to be the typical schlub – awkward around women, less than confident at work, the sort of punching bag for his friends – and because of that, he isn’t the character that pops off the page here.

Ben behaves as many of us would if we missed the rapture – we’d try to course correct. He gives us swearing, he isn’t going to steal people’s stuff. He’s showing up to work, attempting to do the right thing. Bram goes for broke, knowing how lame heaven is; what he doesn’t know, yet, is what hell is like, but doesn’t seem to care. The way that the two men approach the end of the world couldn’t be more different, and the idealogical batte is an interesting place to set a miniseries.

Co-writers Festante and Asmus use their different skill sets (Festante as a comedian and Asmus as a comic book writer) well, and make a comic that is actually funny, not just comic funny. Their partnership appears pretty seamless, as there aren’t areas where the book gets overly jokey, nor are there passages that seem to be written without need for some humor. The book is meant to be a comic story, in both sense of the term “comic,” not simply a book with funny sections. The art, by newcomer Rem Broo, is appropriately over the top, with each panel having a chuckle-worthy element in it. This is a book that doesn’t take itself seriously at all, and Broo’s work, while accomplished and expressive, does its best to serve this manic story and bring it to life.

In a landscape that is full of books that take themselves incredibly seriously, it’s nice to see a book being content to be silly.