After writing and illustrating everyone’s favorite book of this decade, DC’s “Batman Odyssey,” living legend Neal Adams turned his attention to Marvel Comics, and specifically, the early days of mutantkind of Earth. 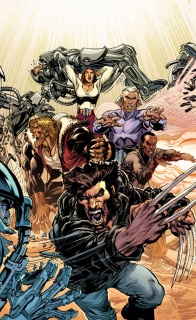 Let’s get this out of the way: there is no reason for this comic to exist. And I’m not talking in a “all of this is entertainment, and isn’t as important as food, shelter, human rights, etc.” No, I mean that even in a disposable industry, this reigns above most else as unnecessary. This is a weirdly constructed, oddly timed, confusingly framed, mess of a comic book, and it doesn’t need to exist at all.

The exact same argument could be made for the aforementioned “Batman Odyssey.” Both DC and Marvel seem to be letting an old friend get some work (which isn’t necessarily a bad thing) by going back to the stories of his youth, and creating, frankly, bizarre stories featuring fan favorite characters that take place at a vague time in the character’s history. Thank goodness that Marvel had the foresight to pair Adams with Christos Gage, to at least put some sort of normalcy on the writing side of this project, so we don’t wind up with any vague sexual innuendos or characters repeating each other’s names dozens of times.

The basic story here is that, before Charles Xavier decided to do something to protect/educate mutants, Logan had a similar idea, and set out to be the protector of mutant kids. After witnessing an old combat buddy’s mutant son explode in front of him, Logan recruits Sabertooth to be his partner in crime, and they set out to be the catchers in the mutant rye. They go around looking for clues, answers and mutants to recruit/save.

While I don’t consider myself an expert on Wolverine, or even a huge fan of the character, just about everything here seems out of line with who the character is supposed to be, especially in his pre-Xavier days. He has classically been presented as a man with memory issues who is bred to be a killer, and who looks after himself above all else. Yes, he has a good heart and yes, he wants to help others, but a “rah rah” leader he isn’t, especially not at this point in his life. His embracing the role as educator and founding the Jean Grey school was supposed to be a big step forward for Logan, and that is somewhat lessened by the fact that he was shepherding mutants 30 years before then.

Of course, that assumes that Adams knows what is going on in current comics, which I just can’t believe for the life of me. He is a creator sorely stuck in the past, and this issue shows that in so many ways, he is a creator who just does what he wants.

Now, it is impossible to know how much Christos Gage had to do with this, besides for, presumably, writing the dialogue. He has stated that this is Adams’ story, with new characters, created by Adams for this project, and that he was simply helping Adams with some of the continuity issues/scripting. And for that, I say that Gage does a so-so job. There are a few cringe-worthy pieces of dialogue, but most of those are due to having to find a way to make this proposed plot work; you can’t really get Sabertooth to agree to be part of your gang without asking him how his life would have been better if there was someone looking out for him when he was chained up in his parents’ basement.

Adams has always been more respected as an artist than as a writer, but his art as of late just doesn’t hold up to his own standards. His proportions are laughably inconsistent, with Logan one minute looking like Bane and the next a regular dude. He also has this propensity to make all his characters emoting all the time, so happy guy on the street has a mile-wide smile, and Logan and Creed are usually snarling or bearing their teeth, even when just having a conversation or riding a motorcycle. Any sort of clean lines that Adams used to draw are noticeably absent here, with everything looking over-inked and ragged.

Not to go off on a rant here, but Adams also draws some African American characters with some very stereotypical features on them. I would never say that Adams is racist, or even trying to draw in a way that would be considered offensive, but I think this is further proof of the fact that Adams exists in a world where he still draws like it is 1971, and people aren’t as sensitive to characters being drawn in such an over the top way. For those who loved the work Adams did in the ’70s, this is like stepping through a time machine to see a book that very much looks like one of those classic pieces.

However, I’m not one of those guys. And while I can appreciate all that Adams did for the comics industry, I can’t get behind this book. The story is simply too dumb, the art too clumsy, and the journey too ludicrous to buy into. This is the same problem I have with the notion that Peter Parker’s father was somehow involved with SHIELD, and therefore in some way is responsible for Peter becoming Spider-Man: nobody needed to fix this stuff.

The X-Men have one of the great origins in all of comics, and Charles Xavier is one of the finest comic characters of all time. The way the X-Men came together should never have been seen as anything other than fine. Why must Adams come in and try to usurp that origin? Why is it important that Logan did this before Xavier did? Why is it important that Sabertooth has apparently been an Avenger and a “first” X-Man? Why must a perfectly good piece of writing be rendered with an asterisk just because a (rightly noted) legend of comics wants to tell a story?

I’m not a big proponent of editorial control over a comics line, but can’t the people at Marvel see that this is a bad idea for the overall direction of their company? Sure, Wolverine helps sell a book (which explains why he’s a part of every team, ever), but this book just further complicates an already pretty convoluted history for these characters – and I’m not even touching the Romulus stuff that this seems to ignore.

The only two things I can commend here are these: Adams creates some new characters, which he didn’t need to do, and both have powers that set them apart from most mutants we’ve already met, and he presents an interesting interpretation of Xavier: if someone doesn’t look or sound like a mutant, why would they out themselves as one? Xavier here seems pretty okay with passing as a human, and it is an interesting place to put the character. His powers have been discovered, but his purpose hasn’t.

But beyond those two nice pieces of business, this comic suffers under the weight of reputation. If I pitched Marvel on this book, they would never have approved it. I think both DC and Marvel are trying harder to keep their old timers happier, and that leads to books like this one, where logic and characterization take a backseat to nostalgia. And, as much as Marvel is telling readers that now (or NOW!) is what they should be focused on, publishing stories like this firmly place their emphasis on then.