Archie Comics’ latest attempt to bring back The Red Circle characters doesn’t shy away from its classic elements, but in the modern era of comics, that could actually be a welcome fact. 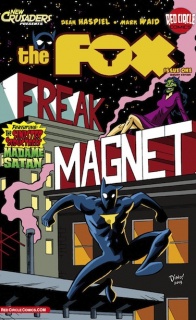 When photojournalist Paul Patton, Jr. donned a super hero costume, he thought it would be a quick way to make some news—now the strange and unusual just can’t help but be drawn to the freak-magnetism of the fabulous fighting FOX! While working on a puff-piece at the Red Circle Gazette, an evil truth about social media mogul Lucy Fur is discovered, bringing Paul face-to-face with a criminal kingpin!

Get in on the ground floor with the hottest new fall series featuring art and story from the biggest names in comics today! Including variant cover art from Darwyn Cooke and Fiona Staples! Get freaky!

A quippy photographer who dons a costume to both fight crime and concurrently boost his journalistic career – sounds like a can’t-miss comics premise, don’t it? “The Fox” makes no effort to hide its debt to the “Amazing Spider-Man”, at least not in this modern relaunch. I hesitate to use what has become an admittedly tired analogy in comics criticism, but “The Fox” really feels like a big ol’ love letter to classic Stan Lee/John Romita Sr. era Spider-Man set in the modern world. When Paul Patton snaps a few pictures, his sinister subject is surprised to find that he’s not using a digital camera. The confrontation gives way to an appropriately over-the-top villain that plays up the vampiness and camp of 1970’s super villains.

An overly quirky backup story aims to do more to reveal the deep affection Patton has for the deliberate process of developing film the old fashioned way, but it only succeeds to a point, favoring abstract action over a clear attempt storytelling. It ends up feeling like something of a waste – a nice conceit without the follow through, and clearly weaker than the main feature.

Still, the fondness for the classic is a sentiment that permeates the very pages of the comic itself, in principle. “The Fox” even goes so far as to take a big potshot at Man of Steel at the halfway point – a film that clearly still isn’t sitting well with Mark Waid, if not Dean Haspiel as well. The prevailing sentiment within “The Fox” is one that appears to favor classic comic plots over the darkness and complications that each era of comics layers upon its characters. As Paul Patton, our hero worries about his job and his relationships with friends and family. As “The Fox”, he finds himself in scrapes that he has to punch his way out of with a hefty dose of “Pow!” lettering.

Dean Haspiel’s cartooning plays up the campy aspects of men and women jumping around in costume, making the cowl of “The Fox” into something floppy and comedic, at times. The same holds true for the villain of the opening piece – an over-the-top approximation of so many classic villains in sci-fi/fantasy fiction. Haspiel’s greatest asset is ability to play up the comedy. He really goes all out here. When a character needs to look terribly smitten with someone, Haspiel dials up the goofiest, laugh-out-loud representation of the emotion. The tone is set through Haspiel’s art. Even as our hero takes a ruthless beating, the tone of the book stays on a pretty light keel thanks to the cartoony art and the bright coloring of Allen Passalaqua. Passalaqua’s colors draw a fine contrast between the brightness of the tone of the piece and the seedy nature that street-level comics all contain on some level. It’s really similar to some of the work he did in Snap City on “It Girl! and the Atomics.”

All in all, “The Fox” draws upon the best, most pure aspects of street-level cape & cowl books, with a distinct comedy bend. If you find yourself missing Peter Parker right now, Paul Patton just may be somebody you’d be interested in following. The issue isn’t perfect – the backup doesn’t stick its landing – but it’s a funny, funky book that certainly looks to carve out its niche with plenty of Dean Haspiel personality.