I’m going to spoil my own review for you now: by the time it takes you to read it, you could’ve gone to the store and picked up “The Legend of Luther Strode” #1, and perhaps even the trade collection of “The Strange Talent of Luther Strode” if you don’t already have it. That’s probably the better thing to do. 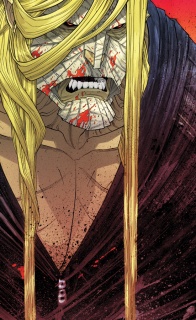 Five years after losing everything, Luther has become more than a nightmare for the evil men in his city… he has become a legend. But somebody is hunting the bogeyman, and he has dangerous allies that Luther will never expect. Luther Strode lives; but for how long?

If you don’t want to buy a comic that opens with a man punching through a door to punch through a man’s face, I don’t know what to tell you.

That comment may seem like a joke, but it’s really not. The “Legend of Luther Strode,” what it is and what it does, is summed up in the first panel of the second page, in which a man’s face is punched through, followed by a reasonable facsimile of Jesse Pinkman getting a similar treatment. It’s brutal, blood-soaked and horrific, and it’s “Luther Strode.” And if that sort of thing doesn’t sound appealing to you, then turn away now because this comic might not be your cup of tea.

However, if this is your cup of tea, then you’re in for quite a treat. “Strange Talent” was a great read as it inverted both average superhero tropes and your stereotypical coming of age novel into a monstrous rampage, and the cliffhanger it left itself upon was obviously set up for a sequel; the hero sacrifices himself, albeit not in the traditional sense, and nobody wins. This is where “Legend” picks up and what fuels the central focus: Luther’s previous and subsequent actions have in fact made him a legend, an underground urban nightmare to the criminals of the world, and where the first series asked the question “What would you do with this power?”, the second asks “How do you stop the man with that power?” And the first issue makes for such an excellent read that it’s like getting to watch the first ten minutes of your most highly anticipated sequel – an intense introduction followed by a few slight teases and some great performances that leave you brimming with anticipation for the next portion.

What makes “Legend” so interesting, though, is how quickly the subtext of the story becomes clear. “Strange Talent” played a gambit, in that it started in a place where the violence was a celebrated aspect and ended in which the blood soaked pages were no longer “cool.” While it may be too early to nail down “Legend’s” thematic direction, it becomes readily apparent that there are many questions that lay beneath the surface to fuel the second portion of the tale: Who is the true villain of this story – Luther, or the criminals he hunts? What is the nature of evil? Can someone so far gone into his own world be redeemed of his actions, however horrific they may be, if they’re for a better world? “Legend” is essentially the much darker version in which most of the questions of “Strange Talent” are skewed through a lense covered in entrails, and the mixture of smart introspection and terrific action let the first entry into the second part of the Luther Strode trilogy a great kick-off.

Suffice it to say, Justin, Tradd and Felipe are back as if they’d never left us. “Luther Strode” is easily the best thing Justin Jordan is currently writing, as his work truly feels at home when allowed to toe the waters of darkness on his own terms. The issue is decidedly less humorous than “Luther Strode” has been in the past, but let it not be said that Jordan doesn’t find great moments to work in some dark humor in between the edges of madness that compose the rest of the issue. This in turn makes Tradd Moore the Agent of Chaos, delivering an issue full of impossible action sequences that play out on such a level that you’d almost imagine you’re actually watching them unfold in real time – whether it be Luther punching through a door and through a face, or an automobile being used specificially as a weapon. Most impressive of all, though, is Felipe Sobreiro’s colors which – after having have had to use every shade of red known to man in the last volume – upgrade to a brand new palette and use of color here, which truly changes the dynamic on many levels and brings out some of the darker and more horrific elements of the story in a great way.

Let me make this very straightforward: did you read and enjoy “the Strange Talent of Luther Strode?” If yes, then buy “Legend.” Even if you didn’t buy “Strange Talent” when it first came out, go buy it now and pick up a copy of “Legend” so you aren’t left waiting. “Luther Strode” is the kind of book that knows what it wants to be and goes after it with a vengeance, and unless you want it to come after you you’d do well to pick it up now. It shouldn’t be a surprise to anyone that a title like “Luther Strode,” known for kicking ass and taking names, doesn’t fall victim to any kind of sophmore slump. Instead, it punches through a door and punches through the reader’s skull. But don’t worry – “The Legend of Luther Strode” is the best fist through your face you’re likely to get this holiday season.