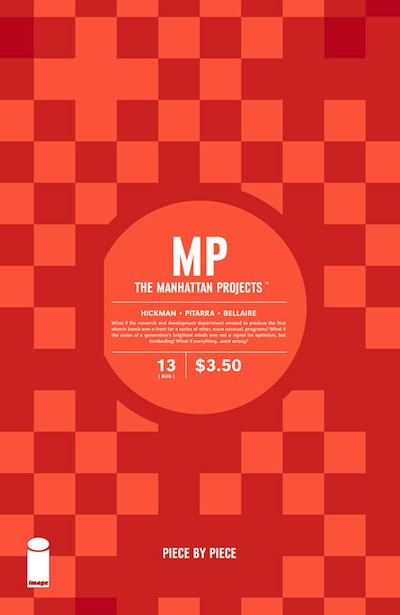 The centre cannot hold as Jonathan Hickman and Nick Pitarra bring “The Manhattan Projects” into it’s second year and show that things aren’t always as peaceful as they seem. But, sometimes, great comics are exactly what they seem. 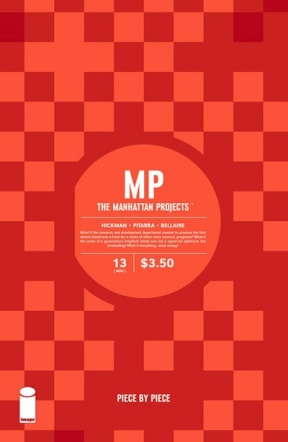 Written by Jonathan Hickman
Illustrated by Nick Pitarra
“PIECE BY PIECE”After a decade of working together to overcome everything that stood against them, fractures begin to form between the scientists of the Manhattan Projects. The thrilling FEEL GOOD, BAD SCIENCE series continues in THE MANHATTAN PROJECTS #13: PIECE BY PIECE!

When it started, more than a year ago, “The Manhattan Projects” showed itself to be a highly inventive concept with fully realise characters and worlds that promised to be a concept with longevity thanks to creators Jonathan Hickman and Nick Pitarra. Now, with twelve issue under their belt, it’s time to check in on “The Manhattan Projects” #13 to series where the series has gone, where it’s heading and whether it has kept up that same inventive quality that made it so unique when it started. The short answer is that is has. Which shouldn’t surprise anyone who has been keeping up with the series as it has not once missed a step in the last year.

This issue finds the Projects in a vastly different place than they were when they started. Not only have they turned on one of their number, but they have turned on their own planet and found themselves on the moon of all places. We see that the Projects have split their numbers into focusing on the completion of smaller projects, the ones detailed back in #11, which lends to an interesting issue structure. The series has always had a unique structure issue-to-issue, with the cold open leading to the title pages with their Feynman quotes, but this issue brings an chapter-like structure to the main pages. Each section is broken down and focuses on a respective project and those working on it from Feynman and Einstein working on Project Gaia to Oppenheimer closing out the issue with Project Cherno. This is not only a nice callback to a previous issue that gives a glimpse at Hickman and Pitarra’s even larger plan for the series that we common mortals don’t get to see, but it allows for more intimate moments between characters that has been rare to see in the last few issues.

Across the board, Hickman’s writing here is just as good as it has always been. As mentioned, while the last handful of issues have either focused on one character (the Oppenheimer issue) or a big reveal (the Fermi issue), this issue gives Hickman a little time to breathe and catch up with where the characters are now. The character interaction between the members of the Manhattan Projects has always been what drives each issue and in this issue we get both quiet, sometimes bittersweet moments as well as Hickman’s famed foreshadowing. While it could be said that less happens here than in most recent issues of the series, allowing the characters to simply stop and talk to each other is, to me, what makes this issue work. The issue feels very much like a recap, a “where are we now”, issue before the inevitable kick in to high gear that is coming.

Not only is Hickman’s writing as impressive as always, but series artist Nick Pitarra has simply gotten better over time. His characters are as expressive and fully realised as Hickman’s writing of them is and keeps you caring about them more than a year in, even after having seen some of the despicable things they’ve done over the past twelve issues. Pitarra really captures the gamut of emotions in Hickman’s script expertly from Harry Daghlian’s bittersweet lava bath to the inside of President John F. Kennedy’s office. Trust me, you want to see that one for yourself. It really would be a vastly different series with Pitarra, whose art captures the small human emotions in each panel as well as the grand scope of the ideas presented on each page. The series has not only grown in scope and scale over thirteen issues, but Nick Pitarra has also grown as an artist and a storyteller which makes this series all the more compelling with every issue.

Overall, while there may not have been a lot to this issue to talk about (as most of the finer details do get covered in our Projections), Hickman and Pitarra have shown that they have not lost any steam. This series is just as inventive and unique now as it was over a year ago. The character interactions are beautifully crafted and bring such a range of emotions to the page that it’s almost impossible not to care for at least one of the characters here. Hickman and Pitarra are still going strong with “The Manhattan Projects” and here’s to another year.

Final Verdict: 8.0 – If haven’t been keeping up with this series, this is the issue to buy. If you have, there’s no reason to stop.