A work of art does many things; it recontextualizes moments of our lives, it challenges preconceptions, it teaches us about ourselves and, most importantly perhaps, it gets us to ask questions. The question that “The Phantom Stranger”#2 begs is clear and obvious from the very beginning. 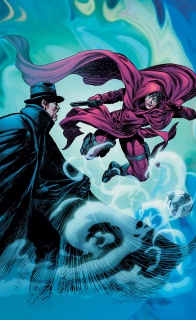 – The Phantom Stranger comes face to face with PANDORA!
– Plus, meet the deadly sons of Trigon – and behold Dr. 13!

To fully appreciate why this book is so unusual – and so bad – it is really important to remember who wrote this book. In case you missed the solicit 2 inches up, this was written by DC co-publisher Dan DiDio. DiDio is the architect of the New 52, wanting to offer a clear and convenient “jumping on” point for fans to approach any new series without the buden of convoluted continuity.

And yet that same DiDio has littered this book with character reveals that are all but missing his arms in front of them saying “Eh?” Each new character introduced is set up in a way for an old fan to say “Wow! Dr. 13 is back!” or “Isn’t that the Spectre?” Except that this fails in two specific ways: the elusive “jumping on” point is gone, and the readers are introduced to newly derived versions of these characters, so the payoff isn’t the same. In fact, the payoff is worse; when you buy a Twinkie (RIP Hostess Foods), you want it to taste like that glorious melding of cream and vanilla cake. If, when walking through the store, you see Twinkies, but when you buy them, it now has a high collar and is filled with an edgy new custard, it not only disappoints in the moment, but it makes you long for what used to be.

And this book has got that last part down to a science. The aforementioned Dr. 13 and the Question are brought back, as are the sons of Trigon, after last month bringing Trigon back along with his daughter called “Rachel” in the first issue, who is called Raven here, in case you’re one of those new fans who somehow knows the names of old characters but not their origins but sort of know their origins or at least their parentage or power set. It is, simply, a God damn mess.

Because you require a cursory knowledge of the old DCU to know who you are looking at (a fact not helped by DiDio’s plotting or dialogue offering no clues whatsoever) and because so many of the old characters are reimagined, it is almost required to have an internet browser open to check names, ensuring you aren’t missing the big connection that is hinted at somewhere. If the plot of the book held much interest or intrigue outside of giant questions of “what does it all mean?” or “what is going on here?” it would be fine to have to dig deeper to grab every little nuance, but that is just simply not the case.

The plot of the book, as far as I can tell, is to have the Phantom Stranger repent for his sins over time by doing the work that the “higher power” gives him. So far, this has birthed two new/old characters into the New 52, The Spectre and Raven, and so this could be a fun way to introduce new heroes, but this issue abandons the device already, and has this issue about his interaction with Pandora and Dr. 13, both of whom “exist” before he meets them.

The Pandora stuff is mostly useless, and just reinforces what all of her actual speaking appearances have shown us: that she is careless and holds more power than she should. Her character keeps being teased as meaning something (beyond being, you know, the catalyst for the New 52 in-story), but her writing is consistently annoying and shallow. Hey, at least here we get a better view of her sweet face tattoos.

Unfortunately for everyone, the art only adds to the jumble of this book. Brent Anderson has done some great work in the past, but that is not indicated here at all. In the series’ three issues (it is really annoying to have to say things like “three issues” in the review of an issue #2 – thanks Zero Month!), the art has gotten increasingly terrible, from “hey, not bad!” to “Neal Adams knock off” to “really? really?” Every panel in this issue looks rushed and sloppy, not helped at all by the inking of Philip Tan, listed here as doing “embellishments,” but I presume that is just a fancy term for the visual damage he is doing through his work. In fact, there are panels where you can see he simply forgot to ink something. Look at the differences in the green shirt in these panels: 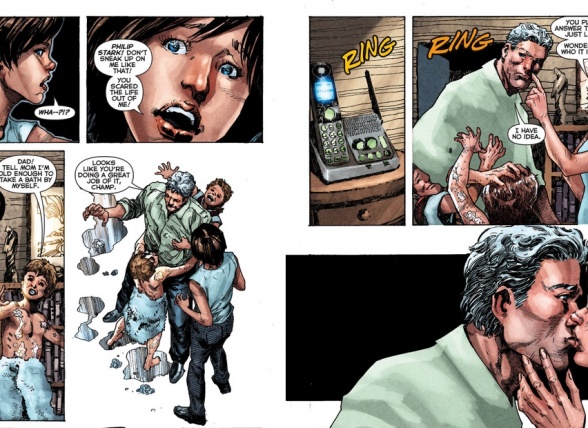 Sub-par art really hurts a book, but it practically kills a book when the book would need great art to deliver it from its sad path the writing puts it on. And here, the sloppy art, paired with the sloppy storytelling, just provides for a book that seems undercooked in every way.

If the book has one leitmotif that is in place so far, it is undoubtedly soccer (or football, if you’re not from the USA). In both issue #1 and here, youth soccer games are the sources of mystical encounters, for reason that, I guess, DiDio is a big soccer fan?

Personally, it is an apt set of symbology for my relationship to this book. You see, I find soccer mind numbingly boring to watch, play or even think about, and this book falls right along those lines as well. In soccer, there is a lot of holding, passes that result in nothing, turnovers, and periods of seeming inactivity. Sound familiar? This issue is one giant holding pattern, story wise, while introducing you to characters new and old that don’t really make sense, teasing things, only to dismiss them, and to do so in the blandest way possible. This comic is in the World Cup of Dull, with pretty good odds at taking the whole enchilada.