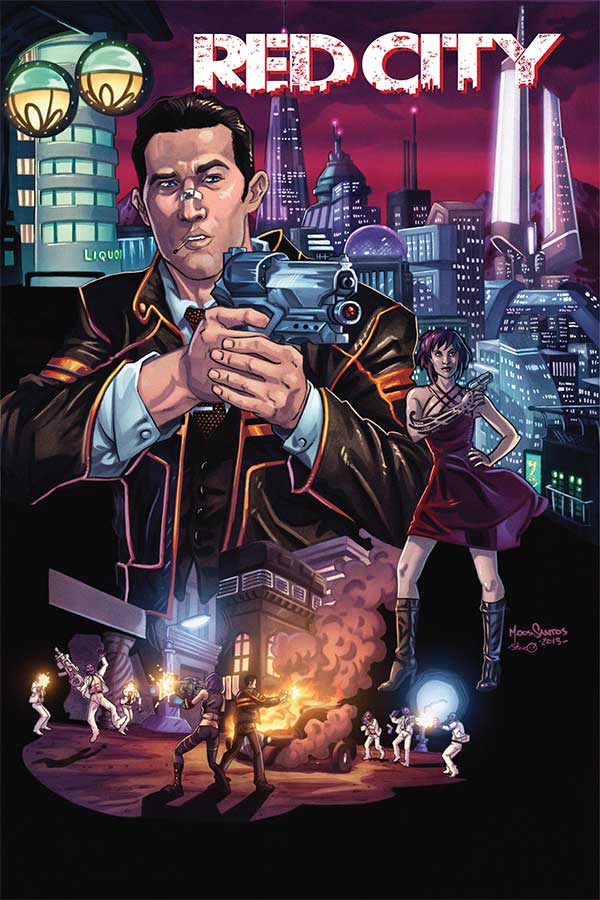 Come visit the wild side of Mars with Daniel Corey and Mark Dos Santos in our spoiler-free review of “The Red City” #1 below! 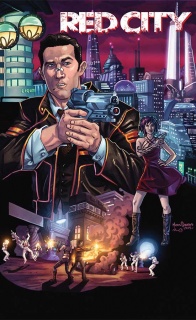 In the wake of a system-wide civil war, hard-nosed interplanetary investigator Cal Talmage is given a simple mission to find a missing ambassador’s daughter in Mars Central, aka Red City.
The routine case quickly complicates as Cal finds himself in the midst of rival alien mobs, street vendettas and political conspiracies.

He struggles with personal demons as he discovers that another war is brewing, and the lives of an entire race hang in the balance.

A couple hundred years into the future, the solar system (including Pluto) has unified into the NSS, a system of governing celestial bodies where each planet acts as its own state. Fso Cal Talmage, a federal security agent for the NSS, is tasked with finding the daughter of an ambassador from Mercury and finds himself in a downward spiral taking him through the seedy belly of the new center of the galaxy: Mars.

“The Red City” opens with a lot of potential. Sure, there are a ton of cliches (renegade detective, femme fatales running around everywhere, contacts who work out of seedy bars) but they still form together to create a coherent world full of potential. Unfortunately, the way we as readers receive this world is through tons of exposition. Don’t get me wrong, it’s really important to establish a Who What Where, but the amount of pure wordspew that comes from Talmage’s mouth is just overwhelming. Even though real investigating does involve a lot of talking with witnesses and sources, the pace in “The Red City” is brought down by innumerable scenes of Talmage talking to somebody about Talia, walking off to another person and then continuing the process before walking into another noir cliche of a cliffhanger.

Really, this comic wouldn’t be so bad if it weren’t for the dialogue-heavy exposition. A lot of great comics have popped up lately that have featured crazy out-there worlds (“Saga” and “East of West” come to mind) and a large part of their success comes from the willingness to not explain their world but to explore it. Fantastic locales and intrigue isn’t talked about while two characters sit in a rather unimpressive jail cell, the viewers are taken right there. The beginning few pages offer an interesting opening with a dynamic action scene but even then Cal’s narration on what he is doing and how he will do it doesn’t enlighten the story. Rather it makes me feel like I’m being spoon fed. Afterwards, the action ceases almost entirely which leads to Mark Dos Santos scrambling for new ways to make the action around Talmage and the increasing cast of talking heads interesting, like when Cal and a friend sit around and talk while watching hologram strippers.

Sure, maybe I don’t know everything about the stripper industry, but I feel like just having regular women in the room with you would be much more cost-efficient than installing projectors into a room and having girls dance in an entirely separate room. Streamline your assets, people!

I really want to enjoy “Red City”. I really do. But the lack of any momentum really detracts any sense of excitement or adventure in the series. Sure there’s some humor, including an excellently done silent exchange between Cal and his boss, but for the most part Dos Santos’s art just seems oddly clunky. When someone gets knocked over the head in the ending of the issue, I don’t think the hit even landed. Said lack of depth only hurts a story that seems to be hurting itself.

“The Red City” has the potential to be a really intriguing comic. It’s a noir story set on Mars, there’s a thousand ways that could go right. Still, the creative team feels uncertain enough to truly dive into their world with full confidence. A gigantic world, full of planets and new interplanetary dynamics are reduced to one city and some characters mumbling about politics like this is Naboo in The Phantom Menace. Maybe if Corey and Dos Santos trusted more in their story and allowed it to breathe on its own, rather than try and apply a narration structure that only hindered it, then maybe this could’ve been a really good title. For now, it’s about so-so.