Nearly three months after his last DC book appeared, James Robinson debuts his first work outside of DC in quite some time, which is utterly unlike anything he’s ever done before. Keep reading this spoiler-free review to see just how big of a step outside of his comfort zone this book turned out to be. 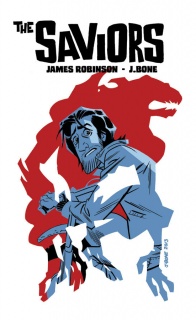 When Tomas Ramirez stumbles upon an extraterrestrial conspiracy to take over the world, his life is changed forever. He must now seek out those few souls who share this terrible knowledge. But even united, how can they hope to defeat a shadowy alien cabal that is both indestructible and eager to kill anyone who threatens it?

Sometimes expectations can really fuck with your enjoyment of something. I can’t count how many films, records, comics, and even real life experiences have paled in comparison to the built up expectations I’ve had going in. As a huge fan of James Robinson’s work, I was afraid that “The Saviors” was going to be a situation where I couldn’t help but be let down. The combination of talent, story, and publisher seemed almost too good to be true, and I was a little nervous to sit down and read the comic, for fear of it being something that would disappoint in some sort of way.

But my fears were for naught: this is a pretty great comic.

Let’s get the basics out of the way: this is a story about an unreliable and unremarkable guy, Tomas, who discovers that his town is overrun by shape-shifting aliens. It is drawn, with focus and restraint and in beautiful black and white by the cartoonist J. Bone, and is Robinson’s first creator-owned work in 15+ years. That should be all the selling points needed to pick the book up, but that also just scratches the surface of what is special about the comic.

Bone’s art is incredibly expressive, and he manages to set a tone with the least lines this side of Mike Mignola. From the first panel, a skyward shot of the gas station Tomas works at, there is a sense of dread and nervousness present, but the tone isn’t slathered on. Instead, it is in little things that Bone sets mood: the right-angle shadows of industrial signage, the flat, choking desert landscape, and the scattered clouds in the sky that never quite overtake the image.

Mixed in alongside this are the characters, each a simple design without too much flair, but each rich with adornments that bring the characters to life. The facial hair on Tomas and Frank couldn’t be more different, but both tell a tiny part the character’s story through just a few lines. When the aliens are revealed, Bone’s eye for character design comes into play again. The aliens, at times, look familiar, but the more you look at them, the more you see Bone’s imagination running wild. Part Mignola creation, part pre-historic monster, part lizard, with a touch of They Live thrown in for good measure, these creatures get more terrifying as each panel progresses, and a book that felt less frightening than most alien invasion stories goes off the rails real quick.

The world Bone and Robinson have created is one that jumps off the page, but not because it is so extraordinary – quite the opposite, really. The world seems so ordinary, so dull, so free of excitement, that it stands out for those reasons. That stark, dusty, desolate setting becomes something very different by issue’s end, and it is in the juxtaposition that the book draws the reader in. The fact that the book is not in color does an interesting thing to Bone’s artwork: it allows the spare line-work more room to breathe, but does so while paradoxically shrinking the world outside the panels. This is a thirsty looking book, and that is the perfect tone for the story.

Of course, a huge chunk of that is due to Robinson, someone who clearly knows his way around a script, and his exposition heavy dialogue somehow belies how expository it truly is; in an almost Shakespearean turn, Tomas spends 4 pages talking to a lizard, filling him in on his backstory and outlook on life. This could appear labored or forced, but Robinson’s gift for dialogue turns it from cheesy device into interesting character development. As the issue progresses, Tomas encounters more people just like him – content in their lot in life, just going about their business.

Between the lack of ambition and the copious amount of weed smoked or discussed in this issue, it would be easy to label this a stoner story, but the marijuana is the MacGuffin here. Tomas can be dismissed because he’s high all the time, but that doesn’t mean he’s wrong. It is hard to read the issue in light of Robinson’s public declaration of sobriety back in October of this year. While I don’t think the timeline quite works out to consider this a story written from a perspective of someone recently sober, the idea of being clear-headed is certainly an important piece of the puzzle here.

As enjoyable as the story is during the first half of the issue, when the sea-legs are being developed, it really kicks into gear in the more action-heavy second half. This is where both creators start to really emerge as different storytellers than perhaps we are used to seeing them play. Robinson’s script gets nearly silent, taking away most of his, as always, impeccable dialogue, while Bone goes into full-on car chase and alien monster mode. Bone has said in press for this book that he was happy to not be doing “all ages” type work on this book, and his art here is jarring and exciting because it still has the technique and initial appearance of a more kid-friendly work, but the work itself is terrifying. Robinson, on the other hand, tells a story that we’re all familiar with: isn’t it frustrating when no one believes you? But the way he does that is both frustrating and revelatory; we feel for Tomas because he is on to something, but we want to smack him because if he wasn’t always so high, it wouldn’t be so hard for him to convince others of the truth he’s trying to expose.

Or would it still be just as hard? The issue he’s raising – fucking aliens, dude! – is something that would sound nuts coming from anyone’s mouth. In building a character so, literally, unbelievable, Robinson and Bone are simply using a narrator that is only unreliable because we perceive him as such. Nothing Tomas says should actually send up any red flags – sure, he’s talking to a lizard, but he’s doing that because he’s bored more than because he’s stoned.

In fact, this book is all about perception versus reality. Tomas seems like an idiot. The sheriff seems like a good enough guy. Frank seems like a guy who’s got brains enough to stay out of trouble. When those things don’t happen, it isn’t a total shock, but it is surprising enough that it keeps the readers on their toes and engaged in each page turn. And, honestly, what more do you want from a comic?