A year in the making, the finale of “The Shade” is here, in a lot of ways, the only logical place for it to end: at the beginning. And, since this issue, written by James Robinson and illustrated by Gene Ha, the same creative team on a prior Shade (aka Richard “Dickie” Swift) mini’s #1 issue, this is, in a way, coming full circle with this character. And it could hardly be more satisfying. Warner, some potentially spoiler-y discussion follows, especially if you haven’t read “Starman.” 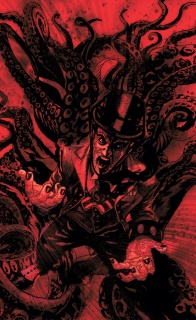 – The final issue of The Shade’s year-long odyssey is here!
– Learn the truth about one of the most mysterious men in the DC Universe and see once and for all what makes him tick: good or evil?

DC’s New 52 has been consistent in one key arena, and that is the ability and willingness to cancel poor selling books. “O.M.A.C.,” a critical success, was cut short because of its low numbers, despite being penend by the company’s Co-Publisher. And yet, “The Shade” survived. This was a rare sign of restraint on the part of the DC brass, perhaps inspired by wanting to keep Robinson, the writer of their much more successful “Earth 2” book, happy. Robinson transformed the Shade from a near-forgotten golden-age Jay Garrick villain to become a wonderfully ambiguous, humorous, rich character who operates on the fringes of the DCU. He is a character that rarely is a major player, but is one that, when used, is used perfectly.

This final issue of the mini is focused on re-telling the origin of The Shade, as well as trying to come to terms with his seemingly random switch from villain to hero (perhaps too strong of a word) over time. While his origin has been told before, this is the most detailed version, with new insight into what exactly happened that fateful night. This maxiseries has been primarily about his bloodline, and has featured three “Times Past” issues, much like Robinson would use in his “Starman” series, where the Shade in his current incarnation debuted. This is listed as “Family Ties Part I,” having seen parts II and III already published (in issues 8 and 4, respectively), working backwards towards this origin.

Gene Ha’s style is an absolutely perfect fit for this issue. His elegant lines and precise touches bring his origin to life in a way that feels lived in and real. Even more impressive than his cobblestone streets, mutton chops and period costumes are how fast his images turn nightmarish when Richard Swift begins his transformation into the Shade. The layouts devolve into chaos and the ink starts to get thicker as the shadow power grows.

One of the pieces of the Shade’s past that Robinson has had fun with is the idea that, since he is immortal, he is able to travel and pal around with fun characters from history. Here, though, we see a pre-Shade friendship between Charles Dickens and Richard Swift, which has been mentioned/teased in the past. While this, in lesser hands, could be seen as gimmicky or distracting, Dickens is presented as simply a chum, not a genius genuising around – Chuck and Dickie are just two fly dudes, hanging out in London.

Ha also manages to make Culp appear every bit as disarming and grotesque as Dickens finds him, and he has a slight tinge of Danny DeVito as the Penguin about him, which adds to the creepy factor significantly (and maybe even a little High Father in the sideburns). Culp just creeps me out, and yet it is still apparent from years of reading Shade stories what Swift sees in him. Swift is such a curious person, who deals in the interesting and unusual corners of the world, and so it makes perfect sense that this odd man would be of interest to him.

But what ultimately makes this issue work, beyond the amazing art, the pitch-perfect Culp stuff, and the grand scale, are the tiny personal moments between Swift and his family. Dickie really seems to love his family – and not just in a “of course I love my family” sense. He calls his elder son his friend, he laments not knowing his infant son better, and he seems infatuated with his wife. The Shade, as a character, has always been so aloof towards just about everything that isn’t Opal City (and, later, Hope O’Dare)- to see him have some actual resonant feelings of regret and loss really make the transformation that much more emotional, meaningful, and poignant.

This has been a series that has gotten better with each issue (I, personally, didn’t love the first couple of installments), and has built to an ultimately satisfying conclusion. Robinson and his cadre of talented artists have created the ultimate Shade story and, hopefully, set the stage for more forays into his world in the future. (Plus – we all want to see that Robinson/Harris Jack Knight in Japan story – make it happen and package it with this in Starman Omnibus 7!)