Jeff Lemire has entered the mainstream stage a bit more due to his role writing “Animal Man” and other series as part of DC’s recent relaunch, but other comic fans know him better for his role as a writer/illustrator of brilliant graphic novels such as “Essex County.” The latest graphic novel from Lemire and Top Shelf, “The Underwater Welder,” is a return to his roots, and proves to longtime fans that his recent superhero writing gigs are not at all in danger of disrupting the creator-owned quality that he is known for. 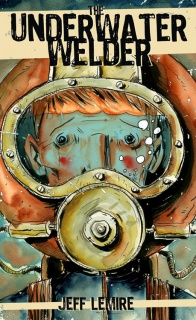 Written and Illustrated by Jeff Lemire

As an underwater welder on an oilrig off the coast of Nova Scotia, Jack Joseph is used to the immense pressures of deep-sea work. Nothing, however, could prepare him for the pressures of impending fatherhood. As Jack dives deeper and deeper, he seems to pull further and further away from his young wife and their unborn son. Then one night, deep in the icy solitude of the ocean floor, something unexplainable happens. Jack has a mysterious and supernatural encounter that will change the course of his life forever.

Equal parts blue-collar character study and mind-bending mystery, The Underwater Welder is a graphic novel about fathers and sons, birth and death, memory and reality, and the treasures we all bury deep below the surface.

While this is certainly a subjective claim, the best fiction is not plot-driven, but character driven. A good story twists and turns, leaving the reader unsure where the tale is going until everything comes together in a satisfying climax, while a great story invests the reader in the various characters involved, as if they were old friends that time had hitherto forgot. A truly spectacular story, though, does both. Such is the case with Jeff Lemire’s newest graphic novel, “The Underwater Welder.” Like the classic television show that it has already been aptly compared to, The Twilight Zone, “The Underwater Welder” aims to present a fractured version of our world, beginning in a setting that is recognizibly everyday before moving into one that, while still familiar, comes off as alien and disconcertingly wrong. Questions are asked and mysteries deepen as the story comes along, until everything comes together in a masterfully sculpted climax. This graphic novel, though, does not just aim to entertain, solely leaving the reader waiting for that tipping point where the reveal delivers some kind of abstract “payoff” for sticking around until those final pages; rather, this introspective little book manages to draw the reader not only into protagonist Jack Joseph, but into themselves.

Nearly everyone knows what it is like to want to be alone. Sometimes, when life is tough and seems at its bleakest, we cannot help but feel like hiding in our room, in the ocean, or at the bottom of a bottle. For some, the desire may be stronger than others, but that desire to get away from everyone and everything typically manifests itself under feelings of great duress. Jack Joseph is a man who seemingly has a safe way to exercise that desire; as a welder who works — you guessed it — underwater at an oilrig, he is able to use his job as a place to a recharge, somewhere where he is completely cut off from any kind of contact. Of course, with the soon-approaching birth of his child and the looming shadow of his own father, Jack’s desire to remove himself from any and all interaction only heightens, and that’s where our story begins. While many have certainly had to deal with the pressures of becoming a father, Lemire’s brilliant move as a writer is in focusing on that desire to be isolated, a desire that can be identified with by anybody, male or female, parent-to-be or not. This is, of course, a tale of coming to terms with fatherhood, and the effect that our own fathers can have on us, but it is also one about the allure of escape, and how sometimes we are compelled to do the exact opposite of what needs to be done. This is not some preachy allegory or cautionary tale; Lemire’s tone is one that is completely understanding, as if he, too, knows this desire and how hard it can be to resist. While anyone can identify with “The Underwater Welder,” it will speak directly to the struggling introvert — such as this admittedly biased reviewer.

Of course, as finely honed as Lemire’s character work is, his superb artwork is what truly sells this book. His gift for conveying emotion is just as powerful in this graphic novel as it is in his other comics, and his storytelling is nigh flawless. What the “Underwater Welder” does differently, though, is perfectly convey that aforementioned sense of lonliness and isolation. In comics, the typical trick for trying to express confinement, darkness, and the like is the simple all-black panel. In this case, though, the seclusion only seems like a construct. The all black panel is a signal: the reader sees it and thinks — in simpler structure — “Ah, the artist is trying to communicate the entrapped status of this character.” As useful as it might be, though, it isn’t natural. The reader thinks about the panel, but does not inherently feel the emotion that it is supposed to convey. Lemire, on the other hand, does not constantly rely on the black panel, instead creating a series of large panels that, while populated with backgrounds, foregrounds, objects, and characters, come off as ultimately empty. Morpheus remarks to Lucifer in Neil Gaiman’s “Sandman” that Hell would have no power if its inhabitants could not dream of heaven; likewise, pure emptiness is nowhere near as lonely as the telltale signs that you are not existing a vacuum after all. Lemire deftly captures both the positive and negative feelings associated with seclusion, from the comfort of privacy to the terror of being wholly alone, with minor changes in angle and brushstroke, proving yet again that he is one of the finest, most delicate artists currently working in the industry.

We have only just barely passed the halfway mark of the year, but “The Underwater Welder” is already a safe bet for the best graphic novel of the year. Nearly everything that Jeff Lemire’s work has been praised for in the past is at full display in this new graphic novel, which stands toe-to-toe with the acclaimed creator’s critically lauded “Essex County.” Anyone who has ever felt even the slightest desire to disappear into their own, secluded space will be unable to avoid being sucked into this incredible read, and will leave its pages feeling as if they, too, embarked on a strange journey into their own psyche. Three cheers to Jeff Lemire for creating such a beautiful and timeless piece of sequential art.