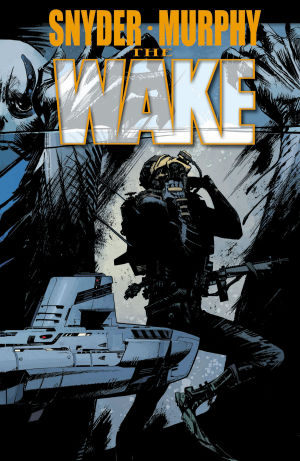 At the bottom of the ocean, the first half of “The Wake” reaches a startling conclusion, as Scott Snyder and Sean Murphy bring their story into a cataclysmic future. 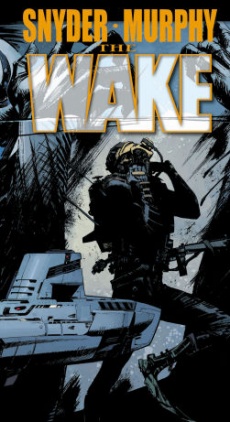 There have been hints that Lee Archer’s struggle at the bottom of the ocean will have much, much bigger ramifications. A flooded future…an impact on evolution…and more. Now, we finally find out. If you think you know what THE WAKE is about, this issue changes everything.

Given the amount of press that Scott Snyder receives for his work on “Batman” and “Superman Unchained”, featuring the two biggest characters in comics, it’s easy to forget the creator-owned work he produces as well. Teaming up with artist Sean Murphy to launch “The Wake” in the early summer, the series served a bright light for the fading Vertigo imprint. From the opening pages in a flooded future city, it’s clear that this was a big, ambitious story, and the creators were seeding many threads that would pay off much later.

Issue #5 picks up the story of the sea crew right where it left off: surrounded by deadly monstrous creatures (mermaids? Let’s go with mermaids). After their rig is attacked by the deadly creatures, a whale sized version of the mermaids appears from the depths. The crew realizes that the attack on them was just a first test, a scouting mission, and the real target is the mainland coastal cities. These creatures are linked to the great flood stories found throughout the history of mankind, and now they have returned to raise the waters again. The crew piles into a deep sea hunting submarine, and makes one last stand against the monster mermaids, while attempting to warn the world of the coming disaster.

Scott Snyder previously used “American Vampire” to restore those demonic creatures to their proper place in peoples nightmares and out of weird glittery fantasies. Now in “The Wake” he has taken mermaids and removed all Disney-fide connotations of underwater kingdoms and sing-a-longs, and replaced it with murderous sea creatures bent on death and destruction on a large scale. Snyder is a master at starting a story with small premises, like the discovery of a new sea creature, and slowly expanding the story to epic proportion. Here he has tied in the flooding of ancient Babylon, India, and China into his creepy mermaid tale, and now the story has gone far beyond a half dozen people on an oil rig.

One of the best aspects of this issue is the way that Snyder balances the large, global-spanning effects of the story with the smaller character moments. The first two pages are devoted to a flashback featuring a younger version of the main character having a conversation with her father. The reader gets character details, backstory, lighthearted moments, and then the reveal of a deep connection to the main story. This connection becomes even stronger for the reader, as now they have even more reason to care about the character. Despite the apocalyptic tone of the book, Snyder includes a couple moments of levity, mostly coming from Meeks and his general surliness, which keep the issue from becoming too depressing.

“The Wake” has been a huge boon for artist Sean Murphy, best known for “Punk Rock Jesus”, and has brought him into the fold of the Big Two comic companies. Murphy is a great artist, with a very unique style. His drawings are full of hard lines and right angles, but never looks too blocky or posed. The lack of smooth lines gives every image just a hint of menace, and contributes to the scary tone of the whole book. The flashbacks to ancient civilizations, however brief, give Murphy the chance to show his skill, and proves adept at drawing everything from massive temples to elephants. The quieter moments work very well also, such as first couple panels of the book. It opens with the night sky reflected in the water, as a hand comes into frame and slowly touches the surface and creates a series of ripples. It’s gorgeous.

A special mention should be made of colorist Matt Hollingsworth, as color plays an enormous role in the book. The palate is dark and cool, mostly of blues and grays, which are appropriate for a submarine under water. One criticism is that the main story is colored so dark and muted, sometimes the reader wants to adjust the brightness level. It helps that each character has their own distinct look and profile, or less it would be very difficult to tell them apart as they get covered in shadows. The flashbacks and flashforward (spoiler) are very bright, by contrast, and as the future timeline becomes the main setting of the story (more spoilers), when the series is finished there will be a very interesting dichotomy between the look of each half.

“The Wake” has been a great success for storytellers Scott Snyder and Sean Murphy, and for Vertigo. This issue continues to grow the story, as what once seemed like a simple monster tale now involves ancient civilizations and imminent global catastrophe. Scott Snyder is an expert at balancing sweeping actions scenes with small moments that actual make the reader care about the characters stuck under the ocean. Sean Murphy’s art is beautifully sinister, and adds a great deal to the overall tone of the book. And man can he make a mermaid scary. “The Wake” #5 brings one part of the story to a close, but it’s clear that there are much bigger things ahead. And below.