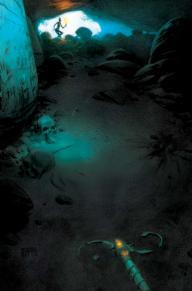 With only one issue left to go, Scott Snyder and Sean Murphy are determined to cram as much future dystopian goodness as possible into “The Wake” #9, and set up a thrilling conclusion. 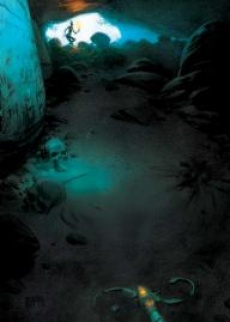 A post-apocalyptic USA only partially above sea level, a country overrun by corrupt leaders fearful of horrific mermaids, a voice dredged up from the deep, dark past – how will all these factors tie together in the acclaimed miniseries by Scott Snyder and Sean Murphy? Will Leeward discover something more to the life she knows out across the vast ocean? Find out in the penultimate issue of THE WAKE!

There was a point around issue three or four of “The Wake” when it seemed fair to wonder how the creators planned to stretch the tale of scientists trapped under water with monsters into ten issues. If even the crew got picked off by the terrifying mermaids at a rate of one per issue, it would still fall a little short. But then they literally blew the entire thing up and catapulted the entire stories decades into the future. Instantly the world of Leeward, her dolphin companion, and the band of lovable rapscallions that forms around them, threatens to make every issue burst at the seams.

As the series reaches its penultimate chapter, any thought that things might slow down and let tension build for the finale are squashed after just the first few pages.

After following the signal beacon halfway around the world, Leeward and the crew have arrived off the coast of the Horn of Africa. They’re hoping to find something left behind decades ago by the scientists featured in the first half of series that will help the survivors defeat the Mers; it could just be more false hope or, even worse, a trap. They use some well-placed explosives to blow a hole in some of the only remaining dry land to follow the signal deep underground. When the dust settles, it seems as though what they found is a tomb, complete with pictographs that tell a story about the Mers. Just as Leeward and the crew start to investigate, the Governess, the power hungry antagonist, arrives with a small army intent on havoc and destruction.

When Scott Snyder creates a world, he leaves no stone unturned. Not content with filling the background with the proverbial ‘here be dragons’, the world of Leeward is fleshed out to the point where one almost needs a guidebook to navigate it. Leeward provides a brief recap of their journey that provides tantalizing glimpses at the crazy state of the humanity, and the sheer amount of stuff happening disguises any element of exposition. Snyder knows exactly when the heartfelt narration needs to be undercut with a wry comment from the roguish Captain Mary, and it keeps the issue enjoyable to read while still establishing the stakes for the character.

Sean Murphy basically gets to spend the entirety of “The Wake” #9 showing off what an incredible artist he is. There’s a double page spread at the start of the issue that is a visual montage of Leeward’s journey across the globe, and Murphy has managed to fit an entire world into two pages. Even without the narration, Murphy’s hard and angular lines perfectly encapsulate what a harrowing road it’s been for the characters. The big moment when the crew finally arrives at the signal’s location feels appropriately epic, with a gorgeous single image of the tomb filling a whole page. The large size makes it easy to spot all the detail that Murphy has included in the paintings on the wall, right down to smudges and scratch marks.

When the Governess shows up and everything gets blown straight to hell, Murphy switches into full action mode. The explosions are huge and vivid, but not at the sacrifice of character visualization. Even as things get more chaotic, Murphy’s hard lined style keeps every clear and in focus, no blurry shortcuts here. It’s amazing that after all the crazy things that have popped up in this series, and this issue alone, the sight of the Governess’ armada is still is a stand out moment that looks as epic as any war movie. Murphy excels at penciling things that are just a bit strange and fantastical, so the final images of Mer-made whirlpool and psychedelic ghostly encounters feels just as natural as any action scene.

When compared with the first five issues, the climax of “The Wake” is moving along at bullet train speed. This is a series that will greatly benefit from a reread when it’s collected in a trade, as Snyder has planted plenty of little details that aren’t vital to the main story and do add to the tone. There are points in the issue where the shear amount of stuff going on threatens to get overwhelming, but Snyder and Murphy keeps the endgame in focus, even as they creates even more mysteries.

Final Verdict: 8.5 – Buy. Things are getting even more crazy as “The Wake” nears its conclusion. Catch up on this one NOW.