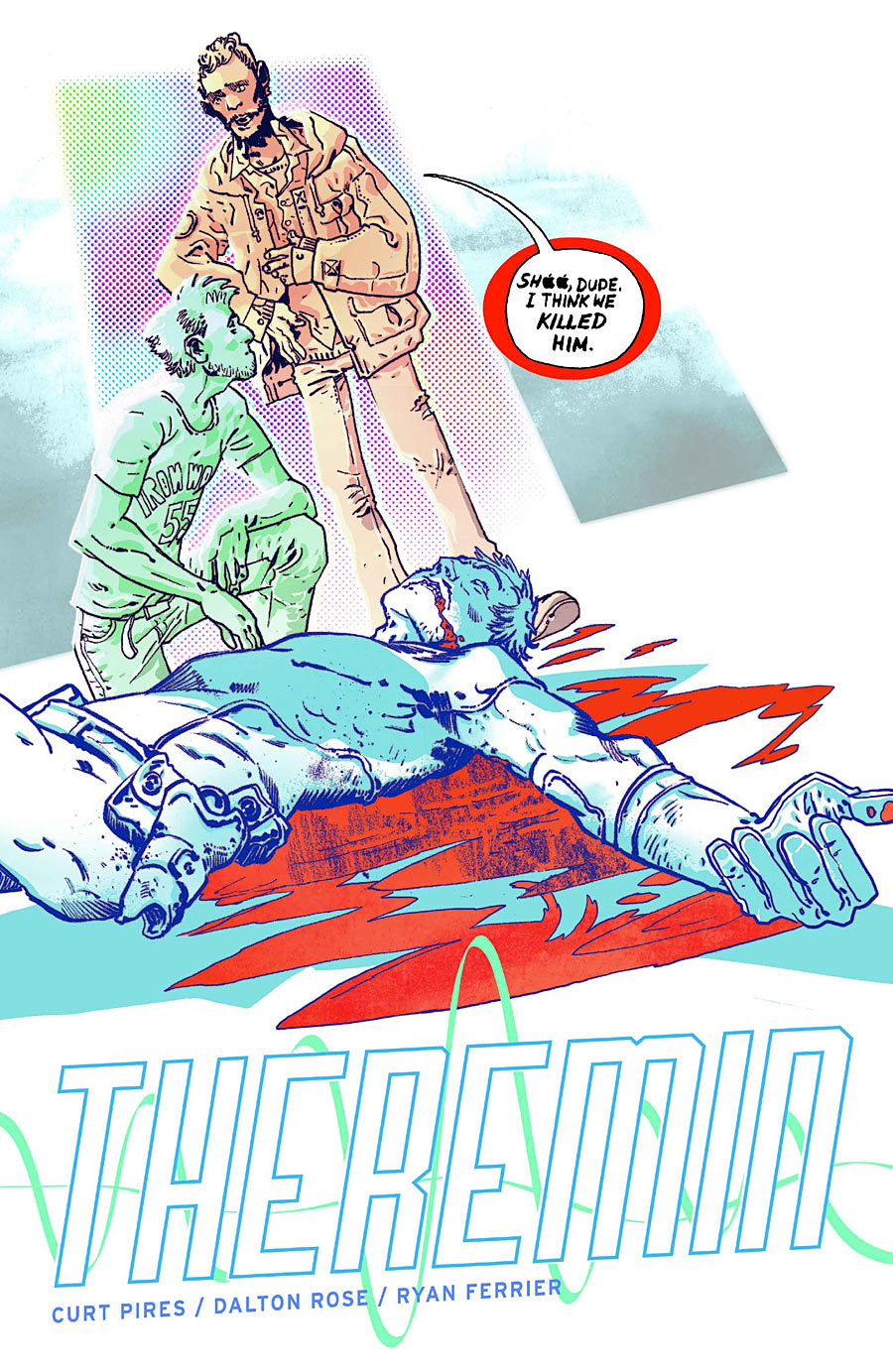 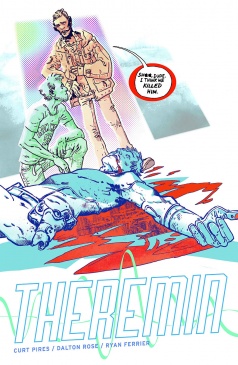 It’s a natural thing in serialised fiction to want to end an instalment with a cliffhanger, enticing the readership to come back for the next instalment. It’s even more natural to want to have that cliffhanger involve a character having their life hang in the balance. But what happens when you can’t think of a way out of that? This is “Theremin” #4 by Curt Pires and Dalton Rose, which has been following the exploits of Léon Theremin (inventor of the musical instrument named after him) in an alternate history that takes a look at his time as a soviet spy. It also had Hare Krishna monkeys living in Hawaii because y’know comics.

In this issue, however, things have changed. After leaving Theremin facing imminent death at the end of the last issue, this issue opens with Curt Pires struggling to write the fourth issue and Theremin’s daring escape from death. And it only gets stranger from there.

This is possibly the hardest comic I’ve ever hard to review. How do you have a objective critical eye for writing and art when the issue itself is showing the process of it creating itself? David Henderson stopped typing to look up out of the window for inspir– oh great, now I’m doing it.

It’s perhaps a testament to Curt Pires writing of not only this issue, but of the series as a whole, that this issue actually feels like a natural progression of the story and, most importantly, doesn’t feel like a cheap rip-off. After having experienced the first three issues of the series, in which Theremin has used his instrument to jump between the panels of the comic he is in as a form of time travel, the notion of following Pires as a character in “real life” struggling to come up with the next issue doesn’t feel that out of place. It also helps that Pires wears his inspiration on his sleeve with a sly nod and a wink to anyone who caught it.

Yet perhaps what makes this issue feel so cohesive with the rest of the story is the fact that it still plays out like a “Theremin” issue. Instead of having the ‘This Is Theremin’ title card, we have Pires himself say it to the audience. Instead of following Theremin on some espionage mission, we follow Pires as he rekindles a lost love in a nightclub. And as everything comes together, we see the walls of reality shatter within the comic book itself to bring Theremin back from the dead and allow the story continue. Pires may have managed the impossible here. He may have written a comic book about himself struggling to write a comic book that feels like a more cohesive piece of work than most comics could dream. Only a writer of Pires’ skill and creativity could have thought of an issue like this and have it work and boy did it.

Yet for as much praise as I want to shower Curt Pires with for making this issue work, he wouldn’t have been able to do it without Dalton Rose. Rose has shown a massive increase in skill as an artist over these four issues, showcasing some of his best work so far here, and if that’s any indication it will be a marvel to see where he goes next. This issue deals with more normality than the previous issues did, showing Pires-the-character living a very simple life as he struggles to write his comic, but once the walls of reality shatter and the world of Theremin bleeds into the pages of “Theremin” Rose simply shines.

Rose’s style of storytelling is very clean and very simple and that helps immensely in channeling Pire’s writing into a comic that is immediately readable to anyone. It could have been so easy for this comic to go haywire because the art muddled the story or made the intricacies of Pires’ writing impossible to follow, but Rose not only dodged that bullet, he brought the comic up even more with his art. This is a comic that probably shouldn’t work, but it does purely on the strength and creativity of the creators.

This comic really has to be read to be believed. There’s no way to put in words just how insane it is that these two creators have no only made this issue work, but made it enjoyable and understandable and have made it feel like seamless part of the grander story they are telling. From Curt Pires’ writing to Dalton Rose’s art, this comic feels born of true creativity and it’s something of a breath of fresh air. This is the kind of story that really only a comic book could tell (sorry Kaufman) and only these two could make as readable as this. If Image Comics is creating a revolution in print comics, Monkeybrain has been quietly creating an underground indie scene that will blow the roof off of the comics industry.

Final Verdict: 9.7 – There is no reason in this mortal coil for you to not be throwing your spare dollars at one of the best comics around right now. Buy this comic.