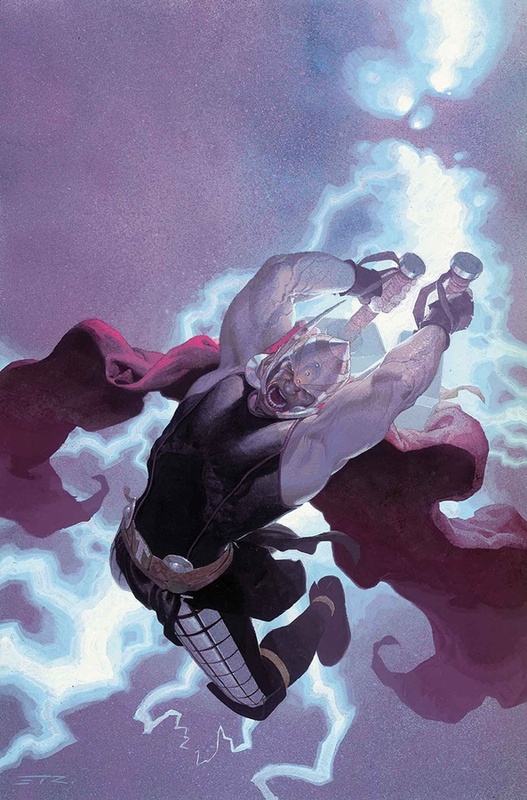 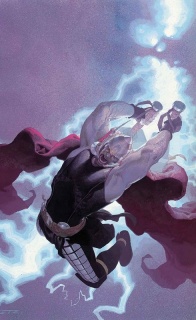 • The grand finale of the epic time-traveling saga of the God Butcher that began in issue #1.
• After the dust clears, what gods will be left?

With issue eleven, Jason Aaron and Esad Ribic wrap up their first major storyline revolving around Thor and The God Butcher. Funnily enough, this isn’t the finale to “Thor: God of Thunder” at all. Considering that this, without a doubt, one of the most epic comics, Thor or Not-Thor related, ever produced, that’s saying something.

One point that’s been brought up when discussing “God of Thunder” is just how the entire book feels like an epic hero’s story in the vein of Beowulf and Gilgamesh. In many ways, it is. Thor’s the unbeatable hero-god and playing off of that allows Aaron to craft the biggest stakes possible. Three Thors, the potential death of all gods, hella mead everywhere; it’s like Jason Aaron was walking in the forest in his usual whiskey mountain man routine, fell through a portal into Asgard, decided it wasn’t hardcore enough, and came back to write “God of Thunder.”  This book isn’t epic in the way 9gag misuses the word, it’s truly a massive story that’s worth to behold.

That said, don’t think “God of Thunder” is Thor being as manly as possible. Beneath all the beards, blood and booze, there’s a lot to be found here. Roughly hundreds of comic pages have been dedicated to Thor crying over how Odin will never approve of him as a son, and there are a few panels here discussing this point too. However, they’re done with such subtle artful craft that it’s incredibly refreshing. In one sequence, Odin’s relationship with Thor is perfectly encapsulated in a way that seemingly contradicts another piece of dialogue later in the issue, but deep down only strengthens their the father and son’s tragic relationship. The feels aren’t concentrated on just Thor however, aside from Gorr (who we will discuss later) there’s an incredibly heartwarming final page that brings the story full circle.

I’ve talked before about how Gorr is one an amazing villain and, and in my opinion the best Thor villain created in the past ten years. He hits the usual notes of being Shakespearean and such a threat as to pose a challenge to a god (or every god in this case.) However his motivations are just so clear that he almost reaches Watchmen-levels of moral ambiguity. Granted, some of the moral ambiguity gets taken away because of  his name being “Gorr The God Butcher”, but it’s really hard not to sympathize with him to at least some extent, or even wonder if Thor is truly in the absolute right here. One thing that can’t be disputed, however, is just how tragic The God Butcher truly becomes in this issue. Again, there’s not much subtlety with someone named “The God Butcher”, but he truly is a character that has more depth than his name would suggest.

It’s a shame that it may be a while since we next see Gorr, considering this is the conclusion of his story, but the silver lining for this is that Esad Ribic draws the ever loving crap out of the fight here. There’s a two-page spread that is just simply gorgeous. Plus, nearly everything I said about how complex a villain Gorr is would not be true if not for Ribic’s depiction of the God Butcher. What was once a menacing nigh indestructible force has been reduced to a broken man, and Ribic depicts Gorr deftly so. Really, this is a book that simply could not work if anyone but Ribic was drawing it, and for that we are eternally grateful. Check out our interview with him today if you want to hear more from this talented artist.

So, with “Godbomb” over, Aaron and Ribic have finished their first major story arc for Thor. Looking back on it now, “God of Thunder” truly has been one of the best books to come out of Marvel NOW! Two creators at the top of their game, telling a singular story that could only be pulled off with these two put together. Putting high stakes action, heartfelt emotion, and beautifully rendered art together, they’ve created a new Thor classic. With their initial arc over, there’s nothing but excitement to be had for what comes next.