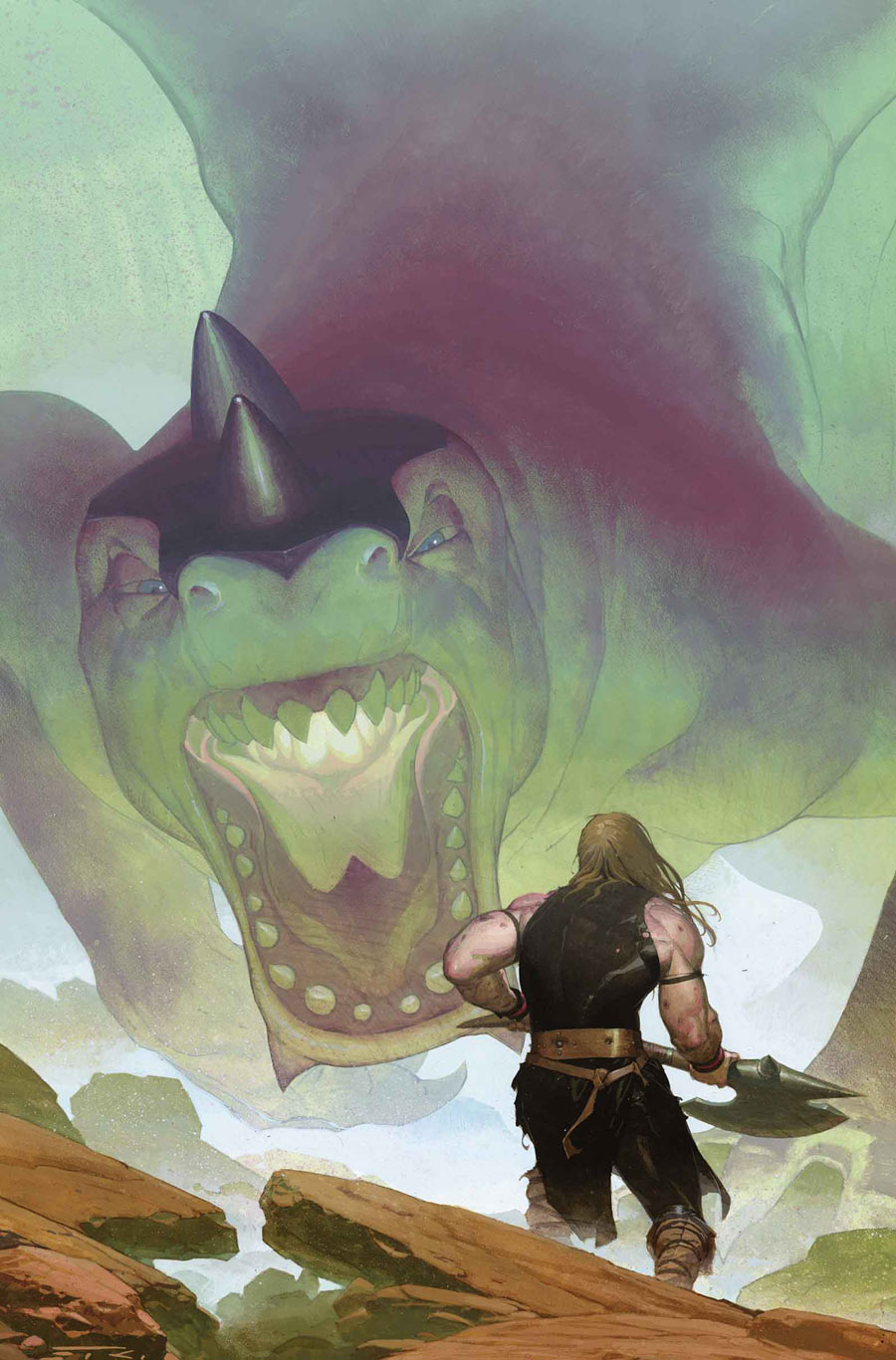 After a less than stellar arc with Malekith, “Thor: God of Thunder” returns to form with a morning-after tale that makes that one “Hangover” mission from Skyrim look like child’s play. 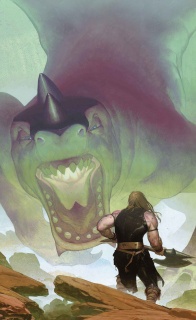 • A tale of Young Thor, in the age of the Vikings. Here be a dragon. ‘Nuff said.

Jason Aaron’s “Thor: God of Thunder” has regularly been a favorite of the Multiversity Staff ever since it launched last year and I think we can all agree that the Esad Ribic illustrated “Godbutcher/Godbomb” arc is a modern classic, to say the least. The follow up with Malekith was a bit of a letdown, and to honest I pretty much stepped away from the title then. Now that “The Accursed” wrapped up back in issue #17, it seemed a good idea to return to the series and, with a one-in-done story, it’s an excellent reintroduction to the book. With a one-in-done story about Thor getting hella drunk with a dragon, it’s the best reintroduction to the series and a reminder of what makes this title so great. Some would cite the most important factor of “God of Thunder” as being the perfect blend of mythology, action, and humor. Honestly though? Young Drunk Thor.

Young Drunk Thor is the greatest single addition to the Marvel Mythos given to us by Marvel Now! Though Thor has been kind of known as a pure noble hero, with the occasional dip into revelry, the expansion of this facet of the character with Young Drunk Thor has resulted in not just some really funny moments, but a genuine character exploration of the Son of Odin. Hidden under all the inebriated hijinx, it’s an interesting examination of how much Thor has grown since his earlier days and through this, Aaron actually humanizes the God of Thunder with this added layer of depth.

But there’s still hella drinking. In fact, this issue takes place the morning after Thor gets wasted while fighting dragons for a tribe of She-Vikings. He wakes up next to a still-breathing dragon and hijinx ensue. It’s a really funny issue fueled by Jason Aaron’s  mountain man insanity. While some writers forego the crazier parts of Thor’s Norse mythology, Aaron’s writing captures the high-stakes madness of the old tales of Thor. It also has the type of morality lessons fables are known for, as Skagbagg the Dragon goes down some dark paths that give modern readers an excellent cautionary tale hidden in a comic where Thor got so drunk fighting monsters that he had to go back and find out what he killed in the first place. Like I said earlier, YOUNG DRUNK THOR!

I mentioned earlier that the beginnings of “Thor: God of Thunder” could be a considered a modern classic and, though he’s not illustrating this issue, Das Pastoras does a great job illustrating a mythical story. His art’s very grimy, almost primal, which works well  with Thor who straddles the line between wasted party-boy and primal warrior-king. Though some details are off (someone in the beginning of the issue kisses Thor teeth first), Pastoras ultimately captures the scale of mythology with action and humor (especially during the “Flaming Moe” in the party montage.) The dragons that star in this episode are unique, as they’re not the serpentine lizards most fantasy lovers are accustomed to. Instead, they almost resemble dinosaurs, the tyrannosaurus rex to be specific, and though some may be put off by that I find it’s a good way to differentiate Skagbagg’s species of dragons from others to create a unique type of draconic creature that is specifically a remnant of the past. Though they look a bit off as dragons, they’re still visually distinct monsters.

With “Thor: God of Thunder #17”, Jason Aaron returns to form with a hilarious one-shot story that also serves as an ironically sobering morality tale. Though I was reluctant to return to the series (more for monetary reasons than quality ones), I’m glad to say that “God of Thunder” has once again become one of the most epic and most fun titles coming out from Marvel, and though Pastoras’s details are occasionally weird, he certainly fits the scope of the story in his art. Also, seriously, we live in an era where Marvel is straight up just publishing “The Hangover” scripts with Thor in them. This is an incredible reality to live in. Hopefully, “God of Thunder” will keep the quality streak it held before the “Accursed” arc.