“The God Butcher” is shaping up to be an iconic Thor story, which is a testament to just how perfectly “Thor: God of Thunder” has started off. This arc does absolutely everything you’d want a solo Thor adventure to do, and adds an extra dose of deicide for good measure. 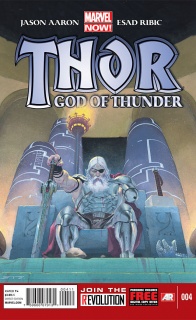 Thousands of years in the future the last god king of a ruined Asgard makes his final stand against the berserker legions of the God Butcher.
But even a king can fall. Even King Thor.

One of the joys of reading comics, beyond the art, is the sense of anticipation. Sequential art, more than almost any other artform, is all about what happens next. The page turn is the key to great comics; when that page gets turned, literally anything can happen. So, when Jason Aaron discussed his proposed three-timeline story for “Thor: God of Thunder,” I was skeptical. That is mainly because, if we know that Thor is an old man for a third of the book, we know current day Thor survives. And if we know he’s alive in the current day, it takes a little bit out of the early saga. This is even more true for the villain of this story, Gorr, the Butcher of Gods. We can assume the hero makes it, but to know that, no matter what young or current Thor does, Gorr remains, it makes things less suspenseful.

But despite that, Aaron has crafted a thrilling story from this three tiered approach. Because Thor is a god, his stories need to be bigger and more dynamic than just about anyone else’s. Aaron managed to create, right out of the gate, a terrifying and deadly villain for Thor, and one that could only be a Thor villain. Sometimes, Thor stories seem like they’re holding back, and not giving him as much god-like power as at other times, perhaps to humanize the character. Aaron has no need for that, and establishes his book as the place where the god Thor lives. This issue really drives that home, as Thor is shown failing to be a king, failing to be compassionate, and failing to be a hero – but a god he remains, for better and for worse.

Assisting Aaron is Esad Ribic, an artist I was only somewhat familiar with before this series launched, and mercy, this is exactly where Ribic is supposed to be. His imagery manages to be otherworldly but grounded, and allows the book to have its own feel and tone outside of every other Marvel book. Even “Journey into Mystery,” a favorite of mine, didn’t feel this majestic and wide open in scope. Ribic’s art gives the impression that anything can happen at any time, which is really saying something, especially when considering the aforementioned spoiler-y nature of the title. Even if the unknown, storywise, is beyond the next page turn, a fucking beautiful piece of art is, and that’s worth flipping the page every time.

All told, this is exactly what a Thor book should be: epic, bold, and not relatable. We don’t know what it is like to be a god, and any Thor book should take the reader outside of their lives and put them someplace totally different. We shouldn’t be able to see ourselves too much in Thor, and that is part of what makes Aaron’s take so refreshing. There isn’t the slightest hint of empathy required to understand and enjoy this book. In fact, Thor is sort of a son of a bitch here, and that is a good thing. We can see him play nice in “Avengers” and “Uncanny Avengers,” but here is the god of thunder – he is meant to be an over the top warrior, who won’t let anything stop him from getting his way. All hail Thor.