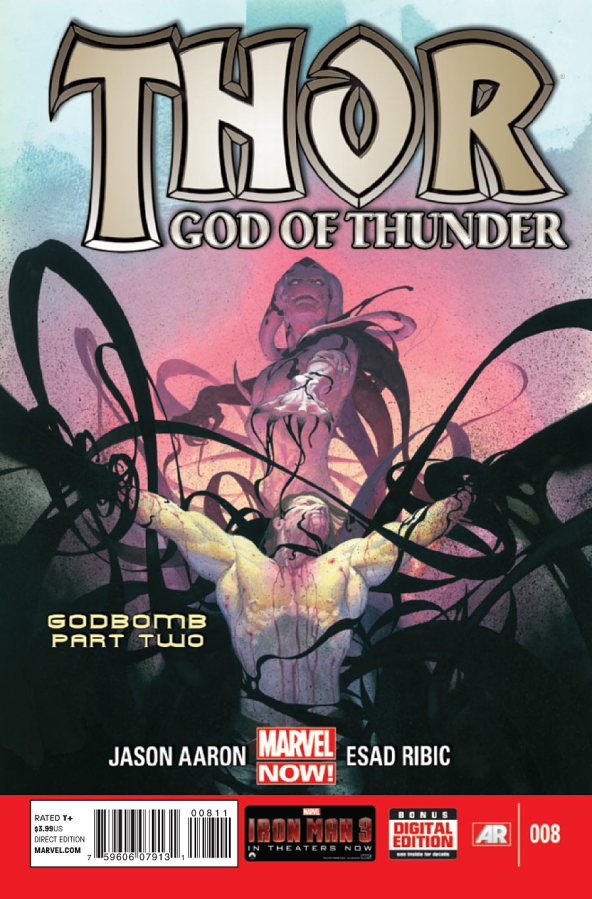 The threads are starting to come together as Jason Aaron and Esad Ribic bring three different Thors from across time and space to stop Gorr, the God Butcher. But can they stop a bomb designed to kill Gods? 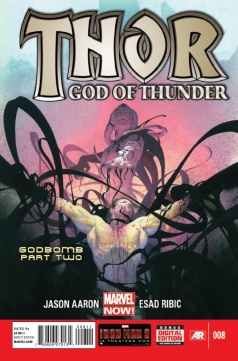 Thor in chains. Gorr transcendent. All hope for divinity lost. As the clock ticks down on one very large bomb, as enslaved gods look to the skies for a savior, enter…the Girls of Thunder?

Even in the world of superhero comics, Thor stands out among the others as being an actual, literal God instead of just a mere mortal with extraordinary powers. As such, his comics have always had that little unique twist to them; instead of being among an allegorical pantheon of superheroes, his supporting cast is the actual Norse pantheon. When he fights his demons they are literal demons from Hel, and when he time travels, he ends up in a desolate future with two other versions of himself ready to beat down on a killer of Gods.

What I’m trying to say is that Thor is an epic character in the truest sense that needs to be treated as such in his books.

Enter Jason Aaron and Esad Ribic. “Thor: God Of Thunder” is one of those rare books that takes a character who has been wallowing in middling, go-nowhere runs for a long time and completely revitalizes him without compromising anything that came before. This issue sees the continuation of the book’s seconds arc titled ‘Godbomb,’ and that title tells you everything you need to know. Gorr is creating a massive, moon-sized bomb to wipe out all Gods in existence and Thor must team up with his older self and his younger self to stop the God Butcher.

What Aaron and Ribic have created here is a true epic of our times. Everything in this book is on a massive, biblical scale, as it should be when dealing with a character like Thor. The titular Godbomb as drawn by Ribic dwarfs anything previously thought of as huge by comparison; it’s simply unbelievable in scale. Even Thor himself, especially the younger Thor who spends the majority of the issue in nothing but a loincloth, looks to be carved from marble under Ribic’s pencil. This is a near perfect creative team for this book, who are crafting a biblical scale story about Gods and they definitely want you to know it. This isn’t just any book about any buff superhero dude in lycra beating up another buff superhero dude in lycra — this is a story about Gods and God Butchers and Godbombs. Everything here exists on a grander scale.

And yet, even though Aaron and Ribic are telling a grand story of Gods, they still manage to deftly articulate the human aspect of the story. By taking Thor at three very different times in his life and juxtaposing them against one another, Aaron is able to really explore Thor not just as a God, but as a person. Young Thor is brash and reckless and does not take kindly to being imprisoned or told what to do. Avengers Thor is more calm and collected, having spent years on Earth with the Avengers. Yet Aaron still shows us the true horror of Gorr’s torment: by killing all he held dear, Gorr has forced Thor to become his father as he grew old. Of the three Thors, it is probably the clash between young Thor and old Thor that is most interesting. It really plays like Thor’s arguing with Odin did in early issues. Even though Gorr barely shows up in the issue, it’s interesting to see the effect he has had on Thor’s character play out over time simply by looking at the change the three different incarnations of Thor go through.

There are some creative teams that just seem inseparable and this is one of them. Ribic’s art is perfect for this book and really plays off Aaron’s epic yet surprisingly funny and human script. His landscapes are awesome vistas of desolate desert wastelands and his starscapes are simply fantastic. His art, especially helped by the colours from Ive Svorcina, is steeped and atmospheric, really bringing the whole book together. If there’s only one point that brings it down, it’s that his faces of background characters can look oversimplified and almost goofy in comparison to the detail of the characters in focus. It’s a small thing to nitpick about, but ocne you start to notice it you can’t really stop.

Even though this arc has only just started, it’s looking to be just as truly epic as the first was. Jason Aaron and Esad Ribic are pretty much the absolute perfect team for this book. The story they are telling will easily go down in history as the point where Thor was truly re-envisioned and brought back to greatness. Everyone needs to be reading this comic because it might just be the best Marvel NOW! has to offer.

Final Verdict: 9.5 – An absolute buy. This is a close to perfect as you could hope to get.