Let’s be frank. There is something about the audacity of this title that is either going to make you want to pick it up immediately or consider it blasphemy, but a little voice in the back of the brain is saying that the polarization is probably the point. Afterall, what is the point of art if not to provoke a reaction? 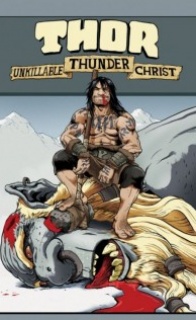 Real Gods don’t get nailed to crosses, they bludgeon their enemies to death with giant hammers. Featuring a guest appearance by Blackest Terror! The second instalment of Esquivel and Sarabia’s thought provoking and hilarious Modern Myths series.

Starting with the solicit, this has the potential to make quite a lot of people very irate, but this book could probably not be more well-timed. Between the newly increased interest in Thor via The Avengers, presidential candidates procaliming their faith every five minutes, Rainbow Oreos, homophobic purveyors of chicken sandwiches and a truly regrettable tragedy fueled by religious differences, this is a great remedy for the religious/values debate weary. Not only does it hook one in with a fantastically irreverent title, but once you start reading some seriously heavy questions and statements are thrown in with the funny.

The representation of Thor, son of Odin, God of Thunder, is probably one of the better ones seen in the realm of entertainment. The god’s cameo in Neil Gaiman’s “Sandman” was pretty accurate and Chris Hemsworth’s onscreen portrayal was true to the spirit of the god, though still very much Marvel’s take on the Odinson. Yet, from the moment Esquivel’s UTC bellows he is skilled at only “lovemaking and murdering,” the real God of Thunder stands up. Then he kicks the audience in the golden apples of Idunn.

Disclaimer goes here: If you are a person of strong Christian faith who cannot take a joke or be open to new ideas, this probably is not the book for you. Flat out. I’m not trying to disuade you from buying the book – in fact I hope you do because of the sheer thought-provoking quality – I’m just giving you time to prepare yourself. The basic premise is something many comic or Thor movie aficionados already know, so we won’t consider this spoilers: Thor bums around Asgard being somewhat of a douchenozzle, and Odin, like any good dad, kicks his lousy son out of paradise to force upon him some responsibility and humility. Thor responds by mugging a local gang of thugs, with obvious results due to his whole “Unkillable” quality. Local superheroes respond to the threat of the invulnerable white dude, and the book goes from simply funny, to irreverantly philosophical. Comparisons between Christ and Thor are made, which is where the book clearly draws its title from. Like some of the best comedians, the humor herin springs from observation. Here they are about both the Realms Eternal of Heaven and Asgard, and honest to god real life, and the book is half parody, half philosophy.

The book doesn’t stop at religion either, as some pretty profound statements about our world are also made. Thor sums up our existence beautifully, proclaiming that we live in a world where our definition of ‘strength’ isn’t the number of Frost Giants we can kill, but rather the simple ability to get out of bed each day to face a world Hel-bent (yes, that’s an intentional “misspelling”) on screwing us over. Oh, and all with no promise of sharing meat and mead with Odin in Valhalla, even if we display that strength everday. Writer Eric M Esquivel gives us plenty of food for thought in these 32 pages.

Visually the style of the book fits the tone like a glove. This whole thing is just a little bit corny, and so the art is very ‘comic’ for a comic book. The exaggerated features and faces just work, but Ander Sarabia also manages to make the main characters look pretty “bad ass” at the same time. Thor looks way more primal than probably any comics fan has seen before, throwing around a Mjolnir that looks like it was put together in the Neolithic Age. The coolest visual touch, though, is that Thor’s upper body is covered with Runic tattoos. The other two main characters, Black Terror and Street Ghost, have slightly simpler designs, but both serve to give you a pretty clear picture of their abilities and skills, even if you’ve never encountered them before; that’s some good character design right there. They also both seem slightly inspired by the white-guys-trying-to-be-black-guys from ” The Boondocks” show on Adult Swim — only, as far as I can tell from this issue, far better human beings. The only complaint is that this book would have probably looked even better in full color.

Ok, thats it. Finished. I am done proclaiming this book’s virtues and qualities. If you are a fan of Marvel’s Thor, retellings of mythology, or just want a seriously enjoyable comic for $2.99, then pick up ” Thor: Unkillable Thunder Christ.” It will probably be the most entertaining thing you read all week. Plus, you might get to annoy some close-minded people while you read it in public, which is just an added perk.

Lover. Poet. Former educator. Now that he is here, he cannot be stopped. Matt's love affair with comics started with the Batman and X-Men animated series in the 90's and shows no sign of stopping. When not writing for Multiversity Comics, he enjoys Warhammer 40K, roleplaying games, reading just about anything, and cooking. Matt lives in San Antonio with his girlfriend and cat.