A cosmic book from Keith Giffen should get at least a one time buy from any self respecting comics fan, even at the slightly hefty $3.99 cover price. But hey, the start of two new stories has the potential to make four bucks seem like a steal. 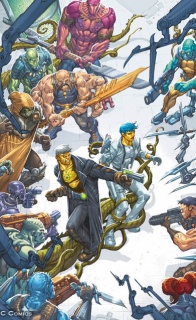 – Introducing THE HUNTED, spinning directly out of this month’s GREEN LANTERN: NEW GUARDIANS ANNUAL #1!
– Featuring the New 52 gallery of space heroes: The Star Rovers, Star Hawkins, Space Cabbie, Tom Tomorrow, Captain K’Rot, and Star Ranger!
– Also introducing Jediah Caul, a disgraced Green Lantern stripped of his power ring, who is hunted for sport on a televised reality show!-
– LARFLEEZE steals the spotlight in his first ongoing series of backup stories! What happens when Larfleeze, the ultimate hoarder, is robbed…of everything!

“Threshold” is an odd book for a few reasons. First of all, the book is a two-story comic, neither of which has to do with the title “Threshold.” The first segment, called “The Hunted,” is a DC version of Stephen King’s (under the guise of Richard Bachman) The Running Man, a story many of you may recall from the over the top Arnold Schwartzenegger adaptation. The second story stars Orange Lantern Larfleeze in a ten page solo tale. The book has a fine creative team behind it, with both Tom Raney and Scott Kollins being solid artists who seem to never get quite enough work, and Keith Giffen’s credentials, both at DC and working with Marvel’s cosmic characters, need no inflating.

It is unfortunate that “The Hunted” is being released so close to “Avengers Arena,” a very similar book from Marvel. Where “Arena” is not cosmic at all, it has an advantage that “The Hunted” does not – people already know and care about the characters who are fighting each other. Here, we are supposed to feel for main character Jediah Caul (what a name!), despite him being a brand new character who doesn’t particularly endear himself to readers in this introductory chapter. The character was introduced formally in last week’s “Green Lantern New Guardians” Annual, but that is hardly essential reading for jumping right in here.

The world that Giffen throws the reader into here is one that is quasi-familiar, but chaotic and strange as well. Slang is introduced apropos of nothing, and while the “game” is explained clearly, it all feels like a first act was unceremoniously cut from the book. This is a stark change from most #1s released today, which act as little more than prologue without any substance. There is not a wasted panel here, and it is not a bad thing to be thrown directly into the mix, but just a little time to catch the reader up wouldn’t have hurt.

The story is based around a gameshow where, in a nutshell, criminals are released into the world and, after 24 hours, are hunted by anyone and everyone for cash prizes. This all takes place on the planet Tolerance (get it?), deep out in space. The upcoming solicits promise lots of familiar (to some) characters re-invented for the New 52, all interacting via this story. While DC sorely needed a cosmic book, this book seems like a little too much nerd bait, without much to hook a mainstream audience.

As the target (read: nerd) demographic, I like the idea of having these characters playing around in this less than original landscape. The pace of the story requires that things happen fast and often, and lots of opportunities for insanity are showing themselves already. Raney’s art is exactly what you’d expect from him: sharp, clean lines with (at times) stunning attention to detail. His Caul shows far more than just what Giffen gives him through dialogue. His mixture of solid character work and the ability to draw the batshit make him an ideal artist for this portion of “Threshold.”

In the Larfleeze backup, “The Ultimate Hoarder” as he is called on the cover, does a bunch of half-inspired Larfleeze stuff. This was the portion of the book that had me most excited, and I must admit how let down I was by it. Larfleeze doesn’t read like the same character that’s been occupying the Green Lantern books for the past 5 years, and Kollins, an artist I really like, seems mismatched here. His Larfleeze seems more Alf-like than usual, and everything looks spastic, but not in a fun “Larfleeze is like Bugs Bunny!” kind of way.

Also, not to get too PC on y’all, but hoarding is a serious disorder, and it is being treated rather lightly here. Granted, a number of TV shows already do that, but I can’t imagine a book subtitled “Your Favorite Bipolar Superhero!,” but that’s essentially what this is. For a company that is so obsessed with public image, this is an odd choice. It also presents Larfleeze, unwittingly, as a character sympathetic for the wrong reasons. In the past, the character had some real depth and sadness to him, and it wasn’t because he couldn’t stop collecting stuff. The backup seemed to be a good way to raise the profile of the character, but in this initial offering, it seems to be a misguided story.

Overall, “Threshold” presents two distinct stories, neither of which are abhorrently bad or astonishingly good. Going in, I expected to love the backup and trudge through the main story. While I didn’t entirely fall for the main story, it was by far the more engaging and exciting of the two stories. Understandably, DC initially led with the Larfleeze content, but I don’t see that being what carries this book. Sadly, despite the solid work, this seems to be destined to a short run as well. This doesn’t have the crossover appeal of an “I, Vampire” (20 issues), or the nostalgia of a “Justice League International” (12 issues and an annual), so this seems to be a 16 and done series at best, which is a real shame. Hopefully, Giffen can draw readers in and do some special work, but with the current DC landscape, it seems that there is only a limited time before this series is hunted like one of its fugitive characters.