The title of a book now, more than almost any other time in the history of comics, really means nothing. “Detective Comics” focuses on one detective, and the fact that he is a detective is the 9th most interesting thing about him; “New Avengers” is an Illuminati book, branded as an Avengers story to bring in readers. “Thunderbolts” is titled so because there is a history of Marvel having a book titled that, but this book has strayed from what the title was supposed to invoke.

This isn’t really a problem; in fact, this book has a character in it known as Thunderbolt, so the branding makes sense, as does the re-focusing of the book away from villains working for the government to heroes with villainous pasts working for a retired government agent. Although the “team of loners” theme is a bit played out, as is the “doing the jobs the good guys can’t be seen doing” hook, this team has five solid fan-favorite characters, placed in a book that could be a good vehicle for them.

The problem is, despite the solid branding and the inspired cast, the comic itself is almost laughably bad. 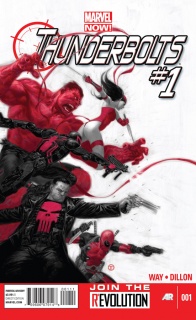 Red Hulk, Venom, Elektra, Deadpool, the Punisher. Forget the courts, the jails, the system – this team of Thunderbolts fights fire with fire, targeting the most dangerous and lethal players in the Marvel Universe with extreme prejudice. Led by General “Thunderbolt” Ross, AKA the Red Hulk, this hand-picked team of like-minded operatives is going to make the world a better place…by all means necessary.

Let’s start with the premise: General Thaddeus “Thunderbolt” Ross is assembling a team. His team is to be made up of assassins; more specifically, assassins that choose to do good instead of ill, even if that line is blurred for them. So, he travels the globe to find these men and women to enlist them, finding each one in some sort of all out violence-fest where he, not in his Red Hulk persona mind you, manages to avoid any and all danger. The most absurd of these is when Ross finds himself in France, and never stops eating his breakfast on a streetside cafe where Deadpool is murdering a bunch of mimes. They’re armed, so they probably aren’t good mimes (sub question – is there such a thing as a good mime?), but this is still ridiculous.

The only member of the team that isn’t recruited in this manner is Frank Castle, the Punisher, who is instead captured by Ross, tied up in a Brooklyn warehouse, and then gets ID’d via a picture message to all of his enemies. This gives Ross and Castle just enough time to discuss the proposition of Castle joining this team before his 400 (!) enemies arrive looking to kill him. I’d like to imagine what that scene outside is like, after the 10th car or so arrives:

Thug #2: Well, everyone else is just waiting around, so…

Thug #2: [After a long pause] So…kill anyone lately?

This issue tries to be the first forty minutes of Ocean’s Eleven, where Brad Pitt and George Clooney recruit their pals to help them rob three casinos. What you get instead is the first forty minutes of Ocean’s Twelve, where Andy Garcia awkwardly interrupts peoples’ lives the threaten them. Each character is handled well enough, but there is nothing of consequence or interest accomplished by these scenes.

I know it is unwise to try and apply reason to a superhero comic, but besides for Castle, who is forced to comply, none of these characters have much reason to want to join this team. Ross certainly isn’t convincing them with anything he says, and most of these folks have already done the covert team thing, beit “Uncanny X-Force” or “Secret Avengers.” If this was their first invitation, that would be one thing, but to reshuffle the deck but keep continuity intact for Marvel NOW!, there needs to be reason that things happen. And, so far as the first issues shows us, this happens because Ross wants to kill some bad guys.

If the issue was anything more than prologue and preamble, that would be motivation enough. But since the entire issue is dedicated to his reasoning behind putting the team together, give us a good reason why you’re putting the team together! It is utterly unfair to compare this to “Avengers” #1, also released this week, but in just a few more pages (and with far less dialogue), Jonathan Hickman gives a compelling, if purposely vague, reason for the expanded Avengers team to exist. While it isn’t divulged why, say, Falcon, joined the team, no one questions that – he’s a low-level superhero, of course he is going to say yes. But why would Deadpool or Elektra put themselves in even greater harm to serve Ross’s whims? The fact that this is never asked or explained is lazy and insulting to a reader with any sense of logic.

The issue’s hook for me, and for many I’m sure, is the art of Steve Dillon, most famous for his amazing run on “Preacher.” Here, Dillon does some things nicely, but everything seems muted and restrained. His restraint is interesting, because the script doesn’t know what that word means. When Venom is mowing down a gang of Somalis, the art makes it look like he’s at a shooting range, with stationary characters being mowed down by bullets and symbiote. Opportunities to go nuts are just blah. Unfortunately, none of Dillon’s panels are as evocative or exciting as the cover by Julian Tedesco, and when the cover is the best part of an issue, the book is in trouble. Dillon’s talents are not being used to their greatest effect, and that alone is a big reason not to buy this book.

But the biggest reason is Daniel Way’s scripting. There are a ton of spots where you can practically see him grinning ear to ear at how clever or awesome the script is, which betrays how derisive and dull it actually is. There is a way for this plot and this cast to be interesting, but it isn’t found here. This issue feels the most like a New 52 comic of any of the Marvel NOW! books thus far, and that is not meant in a complementary way. This seems like a classic case of thinking up the wrong part of the pitch first. They knew the team, they knew the name, but had no idea why it should exist.

And at some point, they stopped caring. I advise you to reach that moment of clarity before the next issue is released.

Final Verdict: 2.8 – Send a picture message to 400 of your friends of this grade to ensure they know what not to buy this week