Although it is literally right there in the title, the fact that most of these stories deals with time travel in some sort of theoretical fashion was still a bit of a surprise for me. Maybe it shouldn’t have been, but oh well. At least the solicit doesn’t make a Rocky Horror Picture…ah, damn it. 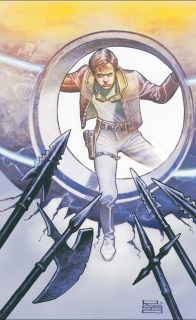 Let’s do the time warp again! It’s time for another fantastic Vertigo anthology filled with spectacular sci-fi stories. Robots, deep space and lots of time travel twists by a bevy of comic greats and the up-and-coming stars of tomorrow. Damon Lindelof and Jeff Lemire bring us a blast from DC’s past, plus another installment of the “Dead Boy Detectives” from Toby Litt, Buckingham and Victor Santos, Matt Kindt presents a stirring story of man vs. machine—and so much more!

Let’s tackle each of these 9 stories on their own, shall we?

This is not only a fantastic way to kick off this anthology, but also just a fantastic short comic. Damon Lindeloff, no stranger to time travel stories, does a really nice job playing with the ideas of paradox, cause and effect, and other, at times, complicated time travel concepts in a simple and elegant way.

It is helped, no doubt, by the fact that his pal and yours, Jeff Lemire, is the artist handling this story. Lemire is one of the best out there at capturing existential dread, and his Rip Hunter teeters on the edge of a breakdown practically the entire time. He also managed to make each Rip look similar, but have enough distinct qualities, that if you see one or the other, you can tell which iteration he’s supposed to be.

Really, really great stuff is always to be expected from Lindeloff and Lemire, and this is no exception. What must we do to get a Lindeloff-penned Rip Hunter series?

This story is a hard one to talk about, because to talk about it is to spoil it. I fear that, even if I disembody the names and elements, it will still clue you in to what exactly is going on here.

I will say this: this story tackles, perhaps, the most widely discussed time travel scenario in modern literature, and does so elegantly, with some damn fine art from Tom Fowler. I will also say that I did not see the twist coming, which is probably because I’m slow. This is a well done story that I really enjoyed, and just goes to prove that even the most cliched idea, done well, can satisfy.

“I Have What You Need” – Gail Simone and Gael Bertrand

This story is a futuristic Twilight Zone episode, where people think they are getting one thing but, in fact, are in for something quite different. Simone is wonderful with words, and really makes some great scripting choices here, allowing all the characters to be fully formed in such a short period of time.

This is also a story that is quite sad and, along with with the prior story, really tugs at your heartstrings. It is a rare treat to see these creators take such emotional chances with their work. The emotions here are somewhat undercut by Bertrand’s artwork, which is very cartoony by design, and so doesn’t pack the same emotional punch other work may have. That said, the fantastical nature of a candy that can help you re-live moments from your life is furthered by the fantastical art. It also helps to tone done the sadness inherent in such a scene.

Overall, this is an enjoyable tale, although one that doesn’t leave the reader wanting more. Unlike the Rip Hunter piece, which seemed just the tip of the iceberg, this is a perfectly crafted short piece, with all the loose ends tied up.

Perhaps the most absurd of all the stories in this book, Spurrier has turned the world of science into an epic pissing contest, to great effect. This is part of the recent trend of science being front and center in comics, with scientists themselves achieving fame and fortune, almost to celebrity status (think “Nowhere Men,” for example).

There are two brilliant scientists, who use their genius and talents to, basically, mess with one another. There are some downright hilarious insults here (my personal favorite being Doc-Z being called a “donkey-bothering felch gargler”), and Dowling draws the comic in such a straight way, that if you somehow didn’t know they were hurling insults, you’d think this was a truly dramatic story. Dowing and Spurrier are an inspired pairing here, and the final reveal is a fun, bizarre, hilarious way to end this story.

People love them some “Dead Boy Detectives,” but this story leaves me a little cold. Sure, there are cute/fun moments, but in an anthology of great stand alone stories, this feels slight and incomplete.

“She’s Not There” – Peter Milligan and M.K. Perker

Another tale born out of sadness, Milligan crafts a story about being able to purchase a haunting from a dead loved one – not really from a ghost, mind you, but a spectral recreation from your own memory. This story begins sad for the reason of seeing the main character so heartbroken over the loss of his wife, but begins to shift once she “returns” to him.

This story is the bleakest in the book, as it is tasked with showing a complicated relationship breaking down all over again, and does so elegantly and with a real sense of purpose. Perker’s artwork is subtle and reverent, while Milligan does a masterful job of changing the reader’s feelings towards all the involved characters. This, too, feels very “Twilight Zone,” and it works quite well.

This story reads as the most traditional piece of sci-fi in the book, yet it continues the book’s trend of really tragic stories. This is a story about a last ditch protocol for a doomed space ship in the 4th millennium. The main character enacts a device that allows each second to feel like minutes, and instead of using the time to follow the protocol, she uses the time to send a message to her mother, sort-of apologizing for the life she’s led.

MacDonald’s art works nicely here, but the story itself suffers in comparison to its book-mates. A well crafted, sentimental, perfunctory story that, ultimately, falls a little short.

No time travel here whatsoever, except the time travel a mind needs to place itself into the future. Kindt tells a tale of two warriors, each representing a culture, who fight every four years with increasingly advanced technologies for the use for a planet’s resources. Kindt, as an artist, is in top form here, drawing technologically advanced weaponry with skill. As a writer, he is doing good work too, but the story, until the last page’s reveal, feels a little easy.

However, the description of the weaponry is engaging and riveting; all the tech makes sense, and each layer seems more ingenious than the last. Sometimes, details can carry a plot, and that is the case with this story. An interesting snapshot, sure, but not the inimitable work we typically get from Kindt.

Another take on the classic time travel discussion. This time, however, we are given the perspective of those ensured to protect that history carries itself out as it is supposed to – a very 12 Monkeys concept. Abnett nails the militaristic/everyday tone of the two workers, and does some nice work playing in the historical playground, with references to Rasputin, Kennedy, and other famous deaths throughout time (including, and especially appropriate for this Good Friday, Christ).

Taken in tandem with the second story, this makes for a nice bookend to the anthology.

Overall, when you take the two fantastic covers by Jae Lee and Eduardo Risso (who has to have been trying for Mark Hamill, right?), and the overall quality of the stories within, this is a damn fine anthology, and gives hope to the fact that Vertigo may still have something to offer in the post-Karen Berger timeframe.