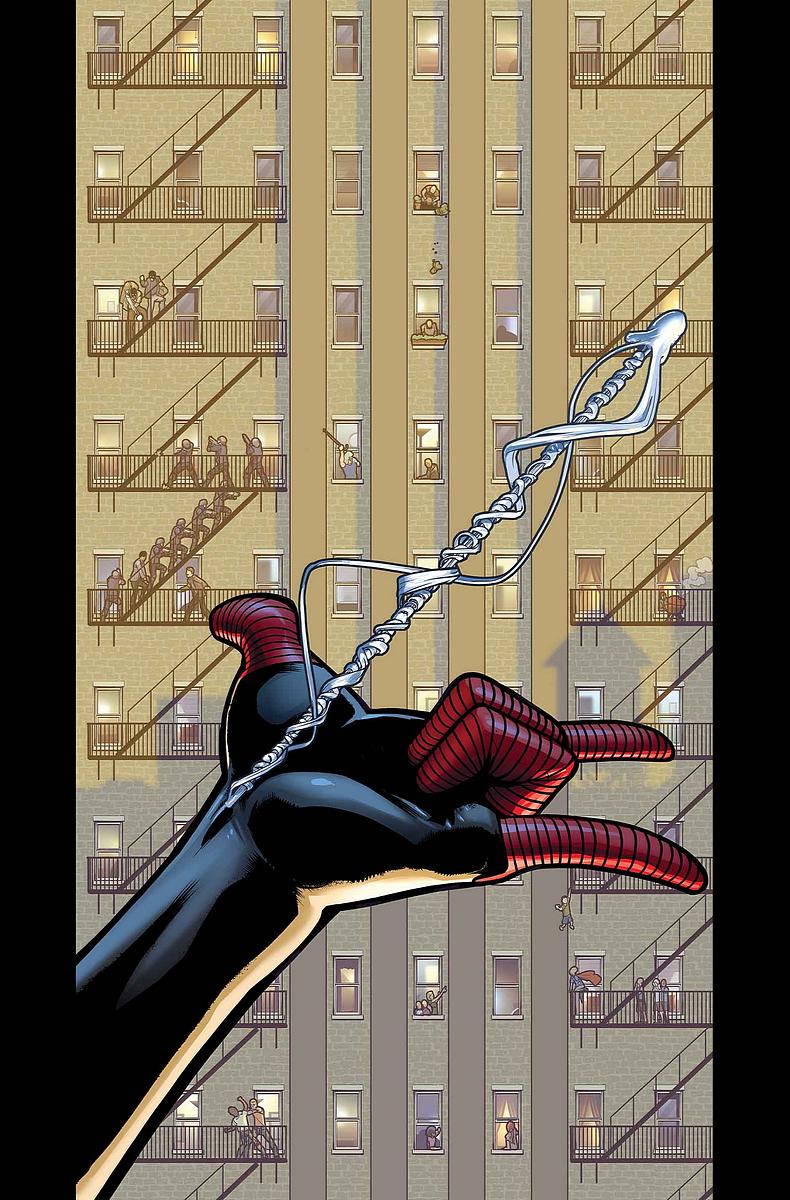 Miles Morales continues his return to the role of Spider-Man, as he helps track down a new super human who has ties to evil Roxxon Cororation, in a solid issue of “Ultimate Comics: Spider-Man”. 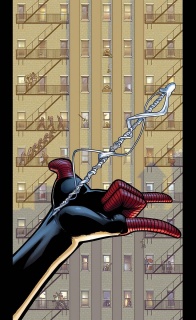 SPIDER-MAN is back!!
Will CLOAK, DAGGER, BOMBSHELL, SPIDER-WOMAN and SPIDEY be enough to take down the evil ROXXON CORPORATION?
And what is Miles’ new girlfriend’s secret?

It’s only been two years since Miles Morales donned the webbed tights and took to the roofs of Manhattan as the new Spider-Man of the Ultimate Universe, but the character has become one of the most popular Marvel characters. By doing the unthinkable, killing Peter Parker (like-actually-for-real-no-he-was-not-really-sent-back-in-time-or-is-in-a-coma) and allowing a new webslinger to take over, “Ultimate Comics: Spider-Man” was revitalised. Over the past twenty-five issues, Miles was seamlessly integrated into the Ultimate Universe, while bringing many new elements to the series. Readers were able to watch as he grew, learned, and adapted, all while trying to live up to the towering legacy of Peter Parker. The first phase of Miles’ career as Spider-Man reached a climax in issue #22, when his mother was tragically killed by Venom.

This issue, and the current story arc, of “Ultimate Comics: Spider-Man” takes place one year after the death of Miles’ mother, which caused him to give up the role of Spider-Man. Spider-Woman aka Jessica Drew has been trying to convince Miles to reclaim his status as a superhero, but he has flatly refused time and time again – until a fight between Bombshell and Cloak and Dagger breaks out right in front of him. It’s not the fight itself that gets Miles’ attention, but Cloak and Dagger’s claim that Bombshell has information about the Roxxon Corporation. It was at Roxxon that the Venom symbiote originated, and Miles sees the opportunity for revenge against those responsible for his mother’s death.

After more than a decade of building this world, Bendis knows the Ultimate Universe and Miles Morales backwards and forwards, and it shows. Bendis is able to effortlessly tell stories that touch on familiar aspects of this universe, while adding new information and dimensions at the same time. The Roxxon Corporation, Spider-Woman, S.H.E.I.L.D., and even Bombshell all have a history in the Ultimate Universe, and Bendis weaves these familiar story points together with Miles’ struggle to regain his superhero status and manages to further the story and Miles’ character at the same time. His trademark humour is also present, with Miles indignantly and repeatedly pointing out that he is a bit out of practice with the whole web-slinging thing.

The tone of the book switches when the scene focuses on the newly introduced Cloak and Dagger, and delves into their backstory. Their story is tragic and moving, as the pair are more victims of the Roxxon Corporation and their experiments. Cloak and Dagger were teenagers, young and in love, until an accident and some illegal and unethical genetic tampering took their future away from them. Cloak and Dagger are alone and desperate for answers, and Bendis is able to make their relationship and backstory feel real and affecting in just a few scenes. This issue deftly balances the story between drama with more lighthearted moments, all while keeping an eye on character growth. Bendis has been the sole writer of “Ultimate Comics: Spider-Man” and its predecessor series “Ultimate Spider-Man” since the first issue in 2000, and while his many other works have both fans and detractors, this is one series where Bendis has consistently done right.

David Marquez handles the art in this issue, after taking over from Miles Morales co-creator Sarah Pichelli for the second time at the beginning of the story arc, and proves to be perfectly capable of meeting the high bar set by her. This issue is beautiful to look at. Marquez leans heavy on the detailed and realistic style of drawing, while retaining just enough of a cartoonish touch to give the book a fun, fantastical element. When the book features flashbacks to the Roxxon Corporations shady experiments, Marquez’ art becomes a little less defined and, with assistance from colorist Justin Ponser, creates a very good visual representation of the haze of unpleasant memories. Conversely, the scenes of Spider-Man and Spider-Woman chasing Bombshell across the Manhattan skyline are bright and lifelike, and balance the issue quite well.

The scenes with Cloak and Dagger provide a chance to see a different side of the art as well, given that their respective super powers are based around darkness and light. The rendering of Cloak stands out in particular, as he resembles something of a human black hole. Cloak’s powers have traditionally been linked to the manipulation of dark matter and openings to another dark dimension. It sounds cool, but there is not instinctual visual representation of these powers, at least not one that fits into the supposedly more grounded Ultimate Universe. Marquez makes Cloak into a captivating figure, and draws the character so it appears like the surrounding world is slowly being sucked into his body. The way that Cloak’s body and the edges of the world around him blend together looks both real and dangerous.

It perhaps should be noted that “Ultimate Comics: Spider-Man” #26 doesn’t connect with the larger “Hunger” series or upcoming “Cataclysm” crossover. No hints or foreshadowing of Galactus eating away at the Ultimate Universe. What this issue does feature is a solid Spider-Man story with great visuals, told by people who have a firm grasp of the universe and Miles Morales. There is the right mix of character growth and story development to appeal to both new and long time readers alike.

Final Verdict: 8.0 – A well paced story with the right mix of humour and drama, great art, and big reveal. After thirteen years, this series still proves to be the bright light in the Ultimate Universe.