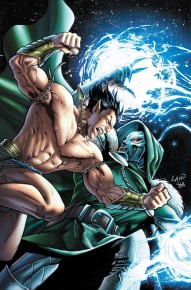 “Ultimate FF” #3 is a messy mess that shows why the series earned its cancellation. 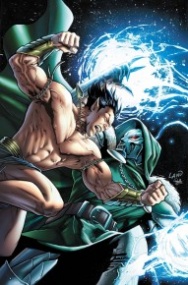 “PALACE OF THE BRINE” (PART 2 of 2)
• Invasion from a parallel Earth!
• A new ATLANTIS will rise!
• Will NAMOR massacre his own people to survive?

Just a couple months ago, after almost a year of hype, Galactus came close to destroying the Ultimate Universe. He was defeated at the last minute, saving an important piece of Marvel intellectual property, and instead the universe basically underwent a reboot. Old teams were destroyed, and new groups sprung up to defend the recovering world. One such team is the Future Foundation, created by Tony Stark, Susan Storm, Falcon, and, for some reason, Doctor Doom. Who was dead, until he wasn’t. Stop asking questions!

An inter-dimensional rift has got the attention of the FF, as a group of rich jerkfaces have been dumping pollution through it into another world. This understandably angered the other dimensions native blue-skinned Atlantean inhabitants, including their leader Namora. The FF arrives and starts yelling at each other and punching things, and have brought along Namor, the last Atlantean of the Ultimate Universe, who immediately despises his female counterpart. Doom betrays them all, and the FF have to choose between escaping with their lives, or committing genocide against an entire species.

What has Joshua Hale Fialkov gotten himself in to? He is a talented writer, and “I, Vampire” was an underrated gem of the early days of the New 52, but this is just a mess. Any thought about the larger problem of pollution goes out the window right away and everyone just yells at each other for the next 22 pages. If anyone stopped being an asshole and just listened for one second, they could solve their problems fairly easily, but instead it’s like watching a bunch of babies fighting over toys in a sandbox. The dialogue is repetitive, and consists primarily of short angry declaratory sentences with bold lettering to highlight HOW MAD EVERYONE IS. When the dialogue isn’t angry yelling, it’s Doctor Doom giving a longwinded exposition-filled speech about how he survived the events of “Ultimatum”, because the whole point of rebooting a convoluted universe is to immediately start making it confusing again.

Loyalties and allegiances change so often that it seems like at one point in this issue every character is fighting every other character. Everyone fights the Atlanteans, then Doom and Namor ditch them, then they fight each other, then they fight the Atlanteans, then the FF fight each other over fighting the Atlanteans. It’s confusing and pointless, and everyone just picks arbitrary sides. Sue’s constant protests to Namor that he can’t wipe out his own species start to get silly because they are really not his species, and they don’t like Namor just as much as he doesn’t like them.

The art. Oh, the art. This is just not good on any level. The whole thing looks like raw pencils, with nary a drop of ink insight. Everything looks scratchy and uneven, with pencil marks layered over every shape and character. There’s more shade getting thrown around here than in a “50 Shades of Grey” themed music video for an Odd Future diss track (Mic. Drop.), and the result is that everything looks muddy for no discernible reason. Characters look different on every single panel, and with proportions Rob Liefeld and Dave McKean couldn’t even dream of. When Tony Stark opens his mask, it would appear that he was victim of the horrifically disfiguring accident instead of Doctor Doom. The color is all monochromatic, Doom’s cape is the same green and Namor’s chest is the same glistening pink regardless of their environment, but sometimes it’s still hard to see what happening through the murk of pencil scratches. And on at least one occasion, the color of a panel is changed and the image is repeated just so to avoid having to draw another panel.

This series has just been cancelled and it comes as no surprise. There are amazing series’ coming out of Marvel right now, and this book doesn’t come remotely close to living up to the company’s pedigree. It’s convoluted, visually confusing, and subverts the entire point of the “Cataclysm” reboot by dragging up a bunch dense Ultimate Universe continuity. It’s just not good, and Ultimate Marvel fans deserve better.