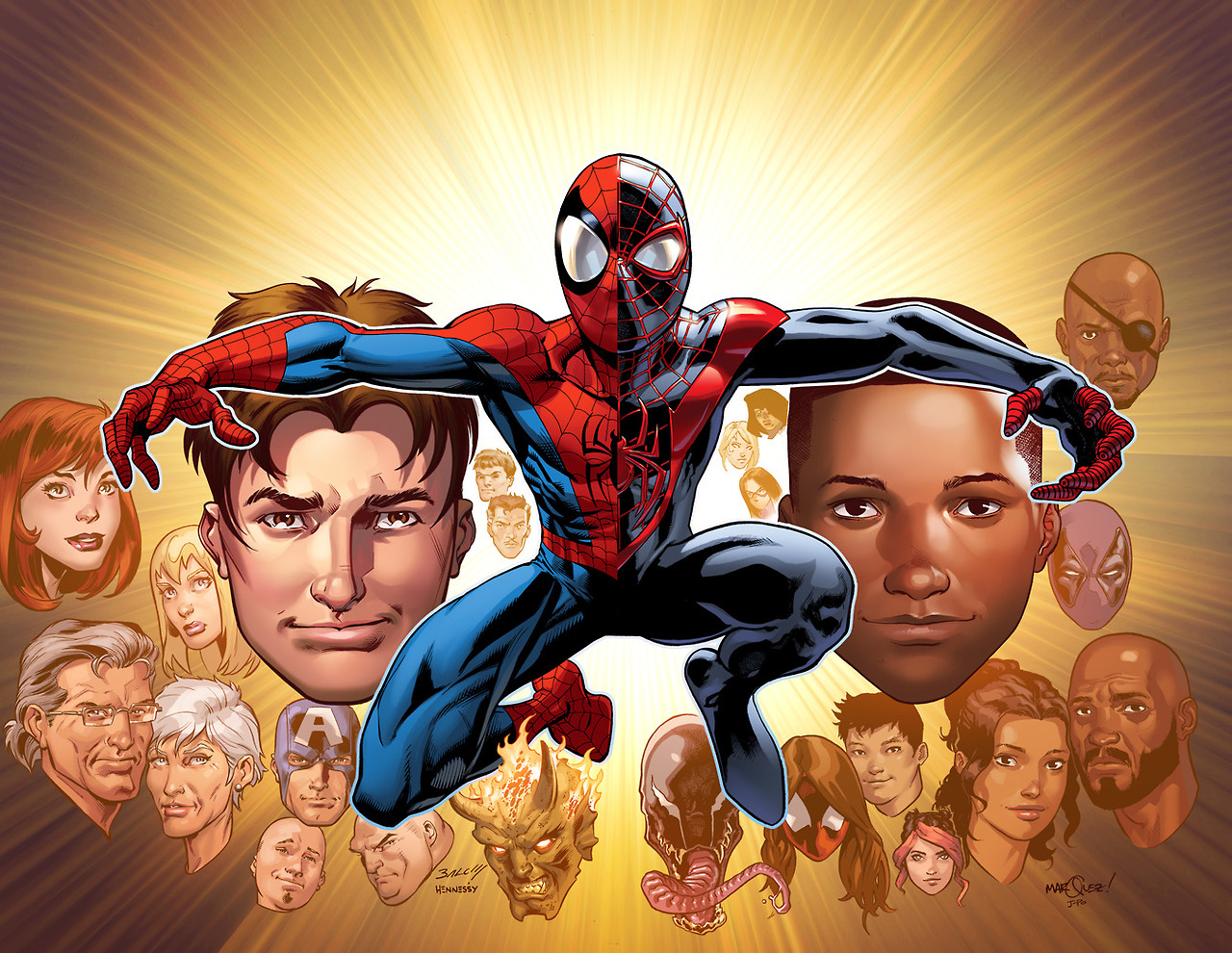 Gathered together for the second anniversary of Peter Parker’s death, Miles Morales and the cast of the Marvel Ultimate Universe mourn the loss of one of their greatest heroes in what may very well be the most Brian Michael Bendis™ comic book ever written.

Mild spoilers for a really obvious twist ahead. 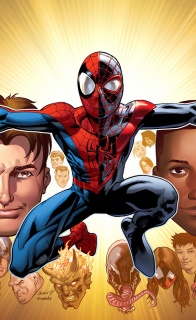 • The world mourns on the anniversary of Peter Parker’s death
• A gathering of Spidey’s friends and foes reveal some shocking truths about Peter and his world
• One of the biggest surprise endings of the year!

You might have noticed this past week that How I Met Your Mother had a poorly received series finale. Long story short, it was an uncomfortable return to the status quo wherein everything built up in the last couple seasons was thrown out the window. And in some respects, “Ultimate Spider-Man” #200 feels a little like that.

Over the past two or so years, Miles Morales has built a legacy for himself as the Spider-Man for the Ultimate Universe. With this anniversary issue, the focus shifts away from Miles to everyone who ever knew the late Peter Parker. We’ve discussed the possibility of Ultimate Parker coming back and the idea of him taking over the title from Miles makes us, to be frank, a little uncomfortable. Opening #200 and seeing the emphasis placed on how great the late Peter was, one could go into a mini-frenzy on how much he’s being made to overshadow Miles. Would this be the moment we see the re-replacement of one of Marvel’s best new characters?

No, that doesn’t happen in this issue. Nothing really happens in this issue. Like I said earlier, “Ultimate Spider-Man” #200 is pure Bendis™; a roundtable discussion of Peter Parker’s life. It’s a bit of a cheat to everyone who expected a gigantic earth-shattering revelation, but a comic written by Bendis where everyone sits around and talks really shouldn’t be surprising at this point.

Now, there is a “twist” at the end of the issue, but its delivery is really muddled. Rendered in shadow, the identity of whoever’s hanging outside the party is totally open for interpretation, though he’ll probably have large consequences on the Ultimate line. I’m not going to say who the mystery person is, but you know it, I know it, we all know it. They didn’t even say it outright here but by the time I looked at the first half of the cover I thought “Ah, seems we’re doing that. Alright.” The most surprising thing about the issue was that they didn’t just come out and scream it into the high heavens outright considering the context. Twenty-odd pages talking about how awesome it’d be if Peter was still alive? There’s still a realm of possibility (the last page is super vague) this could all go in another direction, but it’d be a bigger twist if anyone but Peter showed up back from the dead.

So even though the twist is disappointing, the rest of the issue’s hardly at fault. “Ultimate Spider-Man” has had a gigantic ensemble of talented artists working on it and seeing them all come together here is, at points, stunning. Dave Marquez illustrates the main story, riding the line between mourning and optimism in the remembrance of Peter’s passing. Each party-goer gives a sort of eulogy to what Peter could’ve been, though I’m definitely eyeing the Ultimate Spider-Man show shout-out in Marquez’s segment with some trepidation.

It’s a bold idea to make the meat of this issue a series of contrasting double-pages, but it only hammers home the idea of Ultimate Peter’s legacy as both a hero and character. Showing futures that could’ve been in Mark Bagley and Andrew Hennessey woefully mournful futures, Makr Brooks’s dynamic recreation of Peter’s career and Sara Pichelli’s charming-as-ever depiction of the Miles and Peter relationship, there’s a lot to be proud of for the “Ultimate Spider-Man” in terms of what they’ve created both in this issue and for the past 200 issues. I’d also like to take this space here to talk about David Lafuente’s sequence with Kitty Pryde which, coupled with Bendis’s notable lack of dialogue on that page, sincerely heartbreaking.

Even though not much may have “happened” in “Ultimate Spider-Man” #200, it’s for better or for worse a definitive product of its creators. Bendis exchanging plot in favor of wonderfully written dialogue and characters is really the only way he could’ve written an issue celebrating his Spider-Man, and for all the flack fans give him for writing “breakfast table” scenes, the man has those locked the hell down. Hell, I probably would’ve liked this issue even more without the “surprise twist.” It’s a remarkably beautiful celebration of what could’ve been and an acceptance for what’s been lost. Illustrated by some of the best in the business who just absolutely nail the emotion in this issue. There’s a scene with Jonah Jameson here that’s probably the most emotional I’ve ever seen the character.

“Ultimate Spider-Man” #200 isn’t a game-changer. There’s hints of what’s to come but they don’t matter in the face of the pure love flowing from both the characters and creators. If you’re looking for an “in” for the Ultimate Universe you should probably wait until the eighth reboot in a couple weeks, but if you’re a longtime fan of Spider-Man, be it Ultimate Parker or just the concept of Spider-Man in general, this issue is a bittersweet celebration of everything Peter Parker.