From the ashes of “Avengers Vs. X-Men” rises…not a Phoenix! Psych! What rises is the first of the “Marvel NOW!” books, the first overt attempt to blend Marvel’s two holy families, and the reveal at the Thor loves him a latte.

As a note, spoilers are discussed in the review. 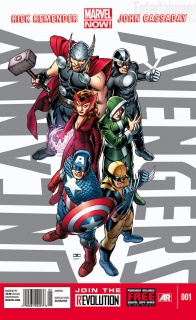 – THIS IS IT! The greatest era of the Marvel Universe starts here! From the ashes of AvX an all-new, all-different Avengers assemble! – Captain America begins his quest to create a sanctioned Avengers unit comprised of Avengers and X-Men, humans and mutants working together — so why is Professor Xavier’s dream more at risk than ever? – The first attack of the most loathsome villain in history will quake the Marvel Universe forever! – The funeral of one of Marvel’s greatest heroes!

In the interest of full disclosure, I should point out that I am not a regular reader of the flagship X-Men or Avengers books, and was following “Avengers Vs. X-Men” through spoilers and friends telling me things. I am the mythic “new reader” Marvel wants to buy this book.

The issue begins, after a one-page brain surgery, with the funeral for Professor Xavier. Logan eulogizes his mentor and, in the end, comes to a sad conclusion: the X-Men, the mutants, everyone, failed Xavier. This initially appears dramatic, but it is pretty spot on. Xavier wanted nothing more than peaceful co-existence, and yet, since the X-Men’s founding, mutant violence has been the norm. Besides from the distraction of Logan calling him “Chuck” repeatedly, this scene was a poignant and sad way for the series to begin.

Alternating with this scene is Alex Summers visiting his brother Scott in S.H.I.E.L.D. lockup. Scott has become someone almost completely antithetical to the man who was the star of the X-books for so long. Scott is a broken man, and one who has lost the core convictions he once held. Part of the goal of “AvX” appeared to be to shake up the X-ranks a little, and Scott has certainly fallen from the leadership position.

While it is a little early to judge, the tone of this book does seem more somber than anticipated, and to Marvel’s credit, they are really trying to make Xavier’s death matter. Xavier is a character who always reverberated past the X-books, and whose presence was one of peace and thoughtfulness. When Captain America and Thor tell Alex Summers that they want to pay their respects, it feels genuine.

The tone of the book is greatly informed by John Cassady’s art. While I’m not a huge fan of his work, it fits this book in a really specific way. He somehow blends the intrinsic idealism of the Avengers and the built-in paranoia of the X-Men into his pencils here, and the book feels similar to both franchises, without feeling derivative.

Cassady’s Alex Summers in particular is familiar, yet appears changed. Havoc is being set up to be the team’s leader, and he is drawn as both the classic cynic and yet projects a hopefulness that is pure Avengers. The book walks the fine line, at this point, between grief and optimism, and Alex is the embodiment of that.

In fact, beyond the Cap/Thor/Havoc interaction, the book is all about grief. Scarlet Witch and Rogue are grieving in different ways; Wanda feels guilty, whereas Rogue is pissed. Logan is disappointed, Scott is in denial. This is practically a Kubler-Ross handbook in parts but, again, the grief feels real. That is Remender’s best tool in this book – making Xavier’s death feel real and lasting.

As the first arc takes shape, Red Skull and his minions are trying to take down mutant-kind and they have quite a tool to do so: Xavier’s brain.

While this is admittedly a shocking ending (it reminds me of the Joker cutting his face off in “Detective Comics” #1), it also feels like one that a supervillain would totally attempt. Of course his brain would be of import to Red Skull! I also think is the easy way to bring Xavier back without resurrecting him – his brain will be attempted to be used for evil, but its intrinsic Xavierness will overpower it. So, we may get a “good” Xavier in a villain’s body. Perhaps even the Skull himself.

Overall, this book’s pitch (mutants and Avengers on a team together, setting an example), plus creative team, plus first arc’s layout all work for me. I was not, at all, expecting to dig this book as much as I did. I am very pleasantly surprised by this, and will be picking the book up regularly.

Wait, how did this happen?