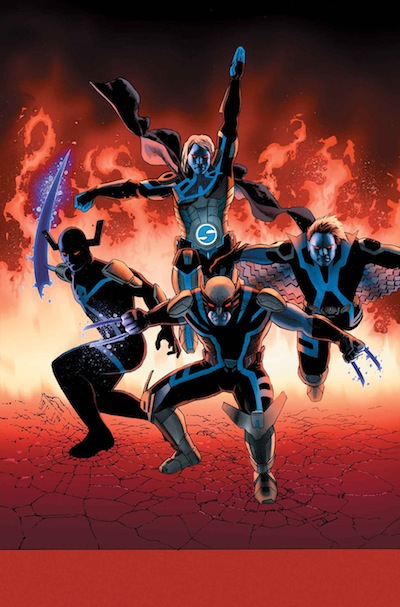 In this week’s “Uncanny Avengers #10”, Remender and Acuna continue Uncanny X-Force 2: Electric Boogaloo. Read below the cut for our review! 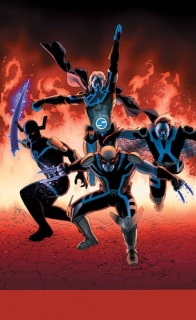 Ragnarök Now continues!
THE FOUR HORSEMEN OF DEATH are unleashed!

I really want to love this book. I really do. It’s for all intents and purposes continuation of Remender’s Uncanny X-Force and a deeper continuation of that Apocalypse mythology he works so well. And I will buy literally anything Daniel Acuna draws. But there’s just so many things wrong with “Uncanny Avengers” that keep it from being a great book and make it a pretty good one instead.

The main problem seems to be just how big of a story Remender is telling. That’s not saying he should tell a large story, large stories are awesome, but it feels like he doesn’t have quite enough space to elaborate on everything he wants to without every character going into a page-long monologue that takes away half of Acuna’s art. Explanation for why Captain America is a bag of dicks? Page-long speech. Reminder of how Banshee died? Page-long speech. Scarlet Witch checking her Twitter? Page-long speech. There’s even third person narration boxes so we can get a short story about how Grim Reaper was a douche as a kid to add some last-minute gravitas to his appearance a couple pages later. This whole book comes across as just narration after narration with more explanation for why things are happening and less things actually happening. Which is a shame because there is actually a lot of good stuff that goes down in this issue, but the constant unnecessary narration and info dumps do not help when it comes to making the story run more smoothly.

However, when the story does run smoothly, it runs really well. The idea behind bringing back four characters close to the Uncanny Avengers team as Death Horsemen is a really striking one that has a ton of potential to bring even more emotional complexity into this book. The impact might have been bigger of course, if the cover didn’t have all four of them right there and been released three months ago, but that’s just the comic industry game and not really the creators’ faults. The designs for the Horsemen are actually really neat as well and definitely fit in with the neat Arch-Daken’s design in particular looks cooler and more menacing than his regular get-up. It’s still unclear just exactly how much of the original personality is left within each Horsemen. Daken seems like he’s picking right back up again from “The Final Execution Saga” while Banshee just basically screams “FUCK! THE SUMMERS FAMILY!” for the whole time he’s on page. Maybe if we only had a couple dozen narration boxes on that. Some characters, like The Sentry, however are written really well and make their resurrections a justifiable one.

The actual plot for the book, however, continues to go into some interesting directions and there’s a lot of great character interactions, especially between Rouge and Thor. Acuna draws each character in a style that’s very reminiscent of art on advertising billboards from the 40’s or 50’s. It’s a clean aesthetic that works really well for some characters like Scarlet Witch and Wonder Man, but when The Apocalypse elements come in it becomes a much more darker sci-fi look altogether. As said before, the redesigns for all the Arch-Horsemen are fairly badass and are a stark contrast to the brighter color of the Uncanny Avengers. Plus, he puts in some really great easter eggs in the background (Hello classic Wonder Man outfit!)

Remender, meanwhile, is still in an awkward place between crafting a huge sci-fi epic and having to actually deliver it. So yes, all of the great concepts are out there: The Apocalypse Twins, Four Horsemen of Death, Sunfire being the best. Yet, there’s a hesitation within the story itself that makes the story feel less fluid than it could. Elements like Steve’s reactions to events in his own series take up a lot more space than, say, Immortus whose role is still relatively confusing and in need of some more explanation even though it’s the event that is actually taking place in this title right here right now.  Remender does give his characters some good moments, however; even if it is between speeches about why they are doing this thing and how they are going to do this thing.

Overall, “Uncanny Avengers” is a pretty good book with some problems. The plot itself is epic in scale but marred by the occasional hiccup in storytelling, the characters either have cool moments or are giving Ayn Rand sized speeches, and Daniel Acuna occasioanlly forgets how a face works. It’s definitely a book that’s worth picking up if you’re a fan of the original “Uncanny X-Force” run, but if you’re looking for pure Avengers or X-Men stories you may want to look elsewhere. It’s not a bad book by any stretch of the imagination, but it definitely has a lot of awkward points it needs to iron out.

Review Score: 6.3 – Browse or Buy with the hope that it’ll smooth out soon.