It would be hard pressed to find someone who was initially more down on the idea of “Uncanny Avengers” than yours truly. What seemed, at the time, to be a cash grab, has emerged into a solid, fun and, yes, delayed comic. This issue acts as an epilogue of sorts for the initial arc, drawn by John Cassaday, while laying seeds for where the book might go in future months – which, is to say, this is another issue of a comic. 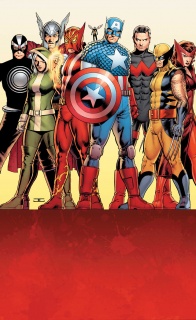 Wonder Man, Wasp and Sunfire join the team just in time for Grim Reaper’s revenge!Tension between the team builds as Havok’s leadership is questioned!The death of a major character at the hands of an Avenger in broad daylight!

Except that this feels like an issue out of time and space; this issue lets all the characters regroup, make amends, and put a good food forward. All of that is fine, but it feels really weird to have to do so just 5 issues into the series. Writer Rick Remender handles the issue well enough, but the epic scope of the first arc weighs this issue down a little. Will all post-arc issues need to be, by design, characters licking their wounds?

In one way, I sort of respect this tactic; in modern comics, we rarely see the after effects that battle has on our heroes, not just physically, but emotionally. Remender does a fine job of allowing each character a few beats to show how they are dealing with not only the effects of the first arc, but also of the fallout of “Avengers Vs. X-Men.” Yes, if you try really hard you can probably remember “AvX,” which feels like a hundred years ago but, in actuality, just ended in October. This book has been delayed considerably, and so references to “AvX” seem incongruously raw compared to where many of the other Marvel books are right now.

Havok, an inspired but unconventional choice for team leader, gets the most face time here, and Remender writes him like few others have. For the first time in my (admittedly limited) post-90s reading of Havok stories, I actually am rooting for the guy. He and Cap make an interesting pair and, so far, their relationship brings something to the book that is fun and unexpected: hesitation and restraint. This isn’t exactly a rosy arrangement, nor is it one that has both sides ready to pounce, but it seems like a lot of new work environments: a little awkward, slightly tense and ultimately uncomfortable, at least in the beginning.

Wolverine and Thor, the two lieutenants of Havoc and Cap, respectfully, have been handled exceptionally well by Remender as well, and while I don’t love Rogue and Scarlet Witch being at each other’s throats all the time, they are unobtrusive enough. New team members Sunfire, Wasp and Wonder Man are all underused, complex characters, who will fit this team well. Wonder Man, in particular, has a complicated history with the Avengers, and his inclusion in the team ties in the beloved (by some) West Coast Avengers. Sunfire, on the other hand, is a minor mutant with an exceptional power, and his recruitment scene is one of the best the series has run out so far.

This issue is illustrated by Olivier Coipel, and his art acts as a bridge between original artist Cassaday, and incoming artist Daniel Acuna. Coipel very much is working within the confines of what Cassaday originally established for the book, and his art feels very much in line with Cassaday’s, even if their art styles are not exactly comparable. He carries the tone and energy of the first four issues through to this one, and the art change doesn’t feel as jarring as it might have with a less simpatico artist.

Overall, the series remains intriguing (especially with the surprise cameo early on that will lead to interesting things down the road), well put together, and inspired. Hopefully, once the schedule settles in, Remender can really let loose and tell the epic story he is starting to build here.