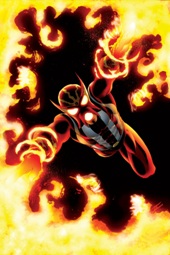 With the Apocalypse Twins finally in play, will Marvel’s flagship title pick up steam? Possibly not. Minor spoilers ahead!

• Xavier is dead, now begins the age of The Apocalypse Twins! Now begins Ragnarök and it’s all Thor’s fault!
• S.W.O.R.D. Peak station is attacked by Apocalypse’s Ship! A Celestial’s fate so shocking, so impossible, it will rock the Marvel Universe to its core.
• This is it, Ragnarök is now and not even the Uncanny Avengers can hold it back!

So far, “Uncanny Avengers” has been a book with a really good plot that was slightly hampered by Remender’s attempts to make his Apocalypse story, ostensibly a follow-up to his “Uncanny X-Force” run, feel like a more mainstream book. In some respects he succeeds: the threats are bigger in scope, the villains are more grandiose, and we’ve replaced the likes of Deadpool and Fantomex with Thor and Captain America. On the other hand, a lot of that “grander scope” causes the book to feel like it’s trying too hard to be mythic. The opening scene, in which Thor prepares to dispel the debris hurtling towards Rio De Janeiro, would probably have gone better if not for the Claremont style narration boxes that pepper that sequence. True, they serve to convey Thor’s inner conflict regarding how to save the city, but the overdose of text feels like a bad case of “tell, don’t show” writing. While perhaps Remender actually is going for a Claremont style with the test, it ends up stunting the action of the sequence which could have gone much smoother without the extra text.

Eventually, that type of specificity ends up being transferred to some characters’  dialogue. Thor, in particular, sounds less like the bad-ass god of thunder seen in Jason Aaron’s “Thor” title and more like some mediocre Shakespearean actor. Sunfire, however, has some really great moments that help offset some of the more stunted speech within the issue (“Thank the Avengers for having the foresight to beg Sunfire to join!”).

Meanwhile, The Apocalypse Twins are still establishing themselves as rightful heirs to their dad’s role as big “Uncanny” baddies. While a lot of their backstory and motivations and dialogue is pretty unclear, that’s more a result of their time-traveling upbringing by Kang than any weakness in the characters themselves. Their actions in the present however, show the Apocalypse Twins to be incredibly capable villains. Their reactions to Clan Akkaba’s recent status and the events of House of M? Fantastic. Their powers? Cool as the other side of the pillow. Their role in all this? A little sketchy, although some mentioned connections to Kang and Onslaught help justify the title jumping straight from Red Skull to The Apocalypse Twins. And if anything, that connection promises some escalating confrontations between all four factions, (Avengers, Apocalypse, Kang, and Red Skull) in the near future.

For now, though, most of the confrontations occur between the members of the Avengers Unity Squad (and wow does someone really need to just make “Uncanny Avengers” the canon team name.) Tensions escalate between the team for various reasons, although The Avengers suspicions of the X-Men, especially Logan, end up pretty darn justified while Rouge just kind of goes ” Oh yeah? Well… that one guy has an axe I can’t prove is Thor’s!” In fact, a good portion of this issue revolves around certain people learning of certain events during “Uncanny X-Force”. The best response comes from Thor who spouts out the best line in the book – spoilers for a highly popular book that came out three years ago. After having been told by the Twins that Wolverine killed a young Evan Sabah Nur, Thor spouts out this following gem: “Logan is an honorable warrior – – no killer of babes!” Very true words.

Unless you count Rose.

Anyway, Daniel Acuña, on the whole, ends up looking surprisingly par. He can absolutely do great work, and has with Remender on “Uncanny X-Force” but perhaps the dark content on “X-Force” fit his style better than “Avengers” does. For example, the scenes with The Apocalypse Twins in the ruins of Akkaba City look perfect and feel like a real return to “UXF” while scenes focusing on the Uncanny Avengers look pretty alright. Acuña’s not a bad artist at all, I really look forward to any titles he has coming out, but perhaps this tone of story doesn’t fit him as well as it did, say, Cassady or Coipel. However, if I had to choose between the three to do a Remender/Apocalypse story, I would choose Acuña in a heartbeat as he really does a stellar job with those characters. Any sequence with The Apocalypse Twins, Akkaba City, or really any callback to “UXF” comes out as the artistic highlight of the book, while all the other scenes come off as alright. It’s not bad by any stretch of the imagination, Acuña actually draws a really solid panel of Thor’s hammer flying off the panel early on,  but the art in this issue probably won’t blow anyone’s socks off.

“Uncanny Avengers” feels like a rather strange book. The concepts, as I’ve said previously, are definitely there. When Remender sets out to make up a villain, an evil plot, or just any idea for his books, they’re out there in all the right ways. Unfortunately, those concepts end up being dragged down by his seemingly desire to craft a book that doesn’t exist in the shadows, but stands in the light; which would be fine if the current plot wasn’t a direct continuation of his earlier bloodier title. It’s sort of like what would happen if Bendis took “Avengers” and used it to continue a plot thread from “Daredevil.” The good ideas and intentions are definitely there, but both “Uncanny” books are dissimilar on enough premise that it feels awkward reading about Clan Akkaba and Apocalypse in a story by the “UXF” team that doesn’t include Fantomex or Deadpool. The title as a whole, needs to go back to what it did in earlier issues and act as its own title. The opening arc with Red Skull was great, it focused on its team, on the team’s mission, and had a villain specifically invented for that team. This “Ragnarok Now” arc though? It just feels kind of weird.

Final Verdict: 6.7 – An alright book that just needs some polishing and or a redirection in focus.