Rick Remender’s run on “Uncanny X-Force” will go down as one of the most critically lauded X-runs of the 21st century. At the end of that run, due to the Marvel NOW! initiative, we are getting a brand new “Uncanny X-Force” series, from writer Sam Humphries and artist Rob Garney that promises a new direction, but not a total re-boot.

Be warned: there are spoilers discussed below. 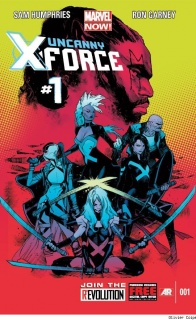 THE DARKEST CORNERS OF THE MUTANT UNIVERSE: EXPOSED! The X-Men: sworn to protect a world that fears and hates them. UNCANNY X-FORCE: charged to deal with situations the X-Men fear and hate! Psylocke and Storm lead a new team of outcasts and scoundrels, including fan-favorite Puck, the villainous Spiral, and the mysterious Cluster. The first adversary to strike out from the darkness? X-legend BISHOP!

There was never really a chance that this would be great, was there?

I mean, sure, stranger things have happened, but the odds seemed stacked against “Uncanny X-Force” from the start. Unlike “Avengers,” a franchise that can mean many things to many people, “UXF” has a very specific playground it occupies. And, with no offense meant to Humphries or Garney, following up an iconic run is never easy, whoever the creators are.

The problem isn’t Garney; his art is crisp and expressive. It is paired well with colorists Marte Gracia and Israel Gonzalez , who use a pink-heavy color scheme that sets the book, visually, apart from the other X-books. Garney’s facial expressions are particularly impressive, as he manages to show awkward when the script never inherently says awkward. This is an important skill; and one that is often times lost in place of bigger guns and weirder spaceships. And while it’s not a spaceship, Psylocke rides a weird steampunk/muscle car/Tatooine cruiser throughout the issue, which isn’t really important, but should be mentioned because, you know, it’s a weird mode of transport.

The problem isn’t with the team; it is an interesting mix of “classic” Uncanny folks and newcomers. As someone who read a lot of X-books in the early/mid ’90s, seeing Bishop, Puck, mohawked Storm, and Psyclocke on a team is like returning home to a simpler time, with holofoil covers and Marvel Masterpieces cards. While the motivation for this team coming together is still left a mystery, and while certain members don’t seem to make much sense (what’s up, Spiral?), it is not unusual for a team to take an arc or so to solidify. The idea that Wolverine would need to take a step back from black-ops missions to run the school makes a ton of sense, and even having Logan hook up Puck and Psylocke makes sense. The construction of the core of the team is solid; working Bishop and Cluster into the team logically may be a little shaky, but it isn’t insurmountable.

Bishop, in particular, is sort of just dropped into this book on one page, seemingly apropos of nothing. Tying him into the team, especially the whole “doing things regular X-Men can’t do” plot, seems a bit of a stretch to me.

“Hey, Bish – I know you’ve had a rough go of it. To ease you back into this century, let’s let you murder some fools.”

But even that isn’t a real roadblock to my enjoyment of this book.

The first major problem with the book is that it is trying to be all things for all people and, in the process of attempting ubiquity, it struggles to even achieve mediocrity. There is a lot of clunky exposition to explain who people are (“Eugene “Puck” Judd recently spent time in hell – against his will”), but there are also images shown that would be totally foreign to non-regular X-readers (Quentin Quire being threatened by Psylocke). There are complex characterizations (Psylocke) thrown up against simplified character sketches (Storm). You get the sense that Marvel is hoping that this wide-net approach brings people to the book in a way that a book with a narrower scope couldn’t, but that approach leaves the book sorely lacking in any sort of coherent direction.

The most egregious problem here, however, is with the dialogue. The book starts with a Pulp Fiction reference, arriving just under 20 years too late, and then proceeds to give Psylocke her biggest character adaptation of the issue: a serious potty mouth. There are five instances when a vulgar word is blacked out, military censorship style. I have no problem with Psylocke learning to swear like Kristen Wiig in Paul, but it just seems like a weird affectation to suddenly thrust upon a character 35 years into her existence.

But the shoddy dialogue isn’t limited to just good ol’ Betsey. Puck uses a terrible (and I do mean terrible) pick-up line, and when he, Psylocke and Storm discuss drugs, it sounds like an after-school special. The email, forwarded to Psylocke, between Wolverine and Puck is an attempt at humor, but comes off as forced and stilted. The plotting of this book isn’t (entirely) problematic, but the dialogue more than cripples the plot and forces the reader to be uncomfortable at least half of the issue.

But the most uncomfortable moment in this issue, and in any comic released this year thus far, comes when Fantomex makes out with Cluster, his female clone, on the final page. To call this disturbing is an understatement, and while it is surely a provocative image, it seems to be a cheap ploy to get people to come back next month. I mean, c’mon, doesn’t clone fucking get everyone to open their wallets and drop cash?

Look, we all get why Marvel wants an “Uncanny X-Force” book on the shelves. I think we also understand why diversifying the team and giving the book a different look and feel from Remender’s run was of the utmost importance. But because of the extremely high bar set, even a solid, well thought out, book with absolutely no mentions of a “Saskatchewan sweetie,” would struggle to be considered a win. But instead, this book feels full of middle school logic – dirty jokes, curse words, randomly assembled team, provocative sex scenarios, drugs, and swords. And this old man ain’t buying it.