“AvX” has ended, and young squire Vince has given you his two-cents on the finale on behalf of Multiversity. Today we’re going to look at the other half of the equation, and an issue that may be more important than the finale of the event itself.

As a note, spoilers are discussed, both for this issue and the finale of “AvX” in general. 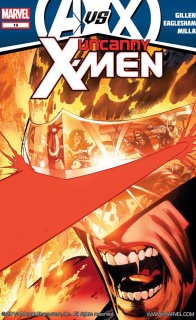 A tie-in to the long-awaited conclusion of Avengers vs. X-Men, AVX #12! How will AVX change the future for the X-Men?

For years, Cyclops has been on a downward spiral. It’s hard exactly to trace where it began at this point; it might be safe to point out Morrison’s run where Cyclops left long-term partner Jean Grey for the nefarious Emma Frost. It could even be a bit later, when Cyclops finally stepped into his own and took over the X-World full time in the wake of “Messiah Complex,” when Xavier all but dropped off the map. Wherever it began, however, Cyclops has been slowly moving down a road that was never going to end well.

This has been a recurring element in Gillen’s “Uncanny X-Men” since he began. It was always an element that was there for sure, yet writers like Matt Fraction would usually tint darker moments with slight hints of optimism — like Cyclops wasn’t close to becoming an anti-hero of sorts. Gillen changed that, however, poising Cyclops post-“Schism” into that of a man so driven by ambition that he his vision became singularly focused (pun partially intended). Soon Cyclops was getting comparisons to Magneto in his gung-ho attitude towards the liberation and freedom of mutantkind, Utopia obviously being a large catalyst of this, and when the “AvX” tie-ins began with Gillen giving Cyclops a press release that was a slight centimeter off of a declaration of war, there was no way it would end well. Cyclops had just become the villain, whether he as a character in fiction or he as an actual entity wanted it or not.

So it is entirely appropriate that one issue before “Uncanny X-Men” ends, Gillen caps off the story arc with a Cyclops retrospective of sorts. It’s not just an issue of Cyclops’ greatest hits, mind you; the issue — “The Passion of Scott Summers” — is an in-depth look into a man that is firmly straddling a very difficult line. Truth be told, becoming the hero isn’t seemingly something Cyclops ever wanted, and this issue serves the very specific purpose of showing off the the distinctions of how Cyclops possessed by a cosmic entity thinks alongside how the sober Cyclops behaves. It’s a meditation on the roles these characters play in their never-ending odyssey, living the lives of valiant heroes one day and being thrust into countless situations that leave them questioning their values. With a run that has often questioned the motivations of these heroes, one that has had quite a few stories debating morality within the fictional realm, this issue is a perfect example of how a tie-in can be used to help add extra dimensions to an already epic storyline.

And when that final page hits, Gillen leaves a lot for the reader to decide. It’s arguably the best ending the story of “AvX” could have hoped to have; after all, you know what they say: you either die a hero, or you live long enough to see yourself become the villain. Whichever Cyclops is, the answer is not easily defined.

Suffice it to say, this is arguably the best issue of “Uncanny.” A singular read of it will lead you to claim that it’s one of Gillen’s best, but additional reads will most certainly elevate it beyond that; this is a great definition of character, a one-shot story that works in years of character history to define one of the biggest characters in Marvel’s world by what he currently is. Gillen flashes through time in a kaleidoscope of definitive moments, all ultimately punctuated by the last few lines and pages. It’s the type of story that you can read without ever having read a single other issue of his run, and yet for those that have it acts as a great penultimate issue as the grand experiment Scott/Gillen put into play ultimately ends in failure. Scott may have lost the X-Men’s battle, but he certainly won his war — and the quiet moment of redemption Gillen offers is enough to change Scott into a hero again, albeit a clearly conflicted one.

It’s the art of the issue that takes everything to another level, however. Pardon the hyperbole, but this is some career-best work for Dale Eaglesham. Eaglesham has proven on multiple occasions throughout his Marvel career to be a very impressive artist, from his galaxy-sprawling exploration in “Fantastic Four” to his recent stylized apocalypse in “Hulk,” but this issue takes it up to an entirely new level. Eaglesham’s task is to recreate a series of familiar moments in X-History, some familiar and some distant, but he does so in a fashion that plays against the clever narration Gillen has worked up through the issue. The static nature of Scott’s memory is illustrated in a fashion that plays up the inner turmoil, with distorted and uneven panels that collide into each other. Every page is different, pulling Scott’s world apart in such a unique fashion that you will watch the man break apart before your eyes. It’s heartbreaking by the end, and yet you can’t look away for even an instant.

Finally, not to bring it up too much, but the last page of the issue. It’s a huge moment, and a powerful one for X-Fans everywhere. And Dale Eaglesham? Nails it.

Obviously with big events, fans find themselves conflicted in how to respond. The popular answer is often to shun it entirely given the repetitive nature of the industry, while others choose to embrace the shifting landscapes and constantly reinvented worlds. No matter how you feel about events, though, this is an absolute highlight of the entire saga. Call it a diamond in a rough or the crown jewel — no matter what, this is a can’t miss issue for fans of “AvX,” the X-Men, Cyclops, Gillen, Eaglesham and Marvel Comics of 2012.