When all the noise about DC hating women started really heating up, “Voodoo” was at the center of the conversation. When the first page of the first issue is a gratuitous boob shot, you know you’re in for rough feminist waters ahead. However, Ron Marz was quickly dispatched off the book, and Josh Williamson brought in.

Issue #9 was labeled in its solicit as a “new direction,” so I figured this would be a good issue for me to check out in my quest to review every book DC is putting out at least once. Would this be a “Blackhawks” situation, where I would be pleasantly surprised, or a “Static Shock,” where I was bummed out that the masses were right? 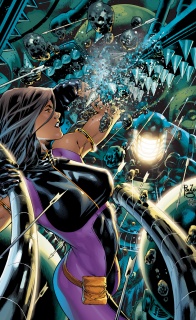 – A new direction for VOODOO starts now!- Pris is forced to confront exactly what she has become after being experimented on by the DAEMONITES.- Compelled to search for other victims like her, she’s offered a deal by the BLACK RAZORS…but wherever way she turns, it’s guaranteed more blood will be on her hands.

Before I get to the issue proper, I just want to note that April’s #8 sold just over 13,000 copies, outselling just “Captain Atom” of the not-cancelled DCnU books. I’ve already stated why I think this series is going to no longer exist come September, so if my review seems a little fatalistic, that’s why.

I think it is important to go back to the original solicitation of this book to gain some context for what this series was originally intended as:

Who is Voodoo? Is she hero, villain — or both? Learn the truth about Priscilla Kitaen as she leaves a trail of violence across America. Discover the new DCU through her eyes, because the things she sees are not always what they seem…

To me, this was pitched as a travelogue to the DCnU, a book that would weave its way through various other locales and help connect the universe. This is a great idea that I’ve never really seen executed well. But, as I haven’t been reading the series, I can’t really tell if that mission statement has been lived up to, except for what I see here.

And what I see here does, sort of, bring together a variety of the stories across the New 52 and add some context for what is seen elsewhere: we get the Daemonite who fought Superman last month (and continue to bug Grifter), we see what the Blackhawks have been up to, picks up some threads from “Stormwatch,” and still manages to tell its own story.

It’s just too bad that most people don’t care about those books, save “Superman.” So while it is a nice idea, except for saying “Oh look, there are some Blackhawks,” and without a truly compelling main story, this book seems pretty superfluous.

And that is sad, because Sami Basri is doing some really, really nice work here. It should also be noted that he is one of the very, very few pencillers who has not needed a fill-in for the first 9 issues (and is solicited through issue #12). His art strikes a nice balance between showing the beauty of the female characters and not taking it into cheesecake territory. There is the ever-so-slight hint of anime influence on his work, but this is not a manga knock off. In fact, the influence of anime balances the realism he brings to his work to create a pretty unique set of work.

The main thrust of this story is about Voodoo, who is a clone, and Priscilla Kitaen, who is the original girl, and the parallel paths they are on; Voodoo to retrieve a weapon for the Daemonites, and Priscilla to stop her. This issue features a lot of visual juxtaposition between the two stories, which is a bit on the nose, but is well executed and really shines through Basri’s art.

The Daemonites being a major player in the DCnU is an interesting choice, and “Voodoo” seems to be the book where the most Daemonite action takes place, in terms of seeing their side of the conflict. Because of the effects on other books, “Voodoo” should be a more essential read, but it isn’t. And that isn’t a reflection on Williamson’s work – I think he does about as good of a job on this book as could be expected; the trouble is that this version of the character isn’t all that interesting – at least not yet.

We comics fans are an impatient lot, and I can completely see why people want to see this book go away and make room for another book they desire (whether that be a Booster Gold series, or the rumored “Robins”), but I think the seeds are planted here for something interesting to happen. Then again, maybe instead of teasing the WildC.A.T.S. by having Grifter and Voodoo books that sell poorly, just put out a WildC.A.T.S. book. The beauty of the DCnU is that it gave readers a theoretical meritocracy: buy what is good, and we will reward you by keeping the good and getting rid of the not-so-good. And, sadly for “Voodoo,” the readers have spoken.

The downside of that is the idea that your favorite series may not have had a dynamite first two arcs, and took awhile to find their footing, and with DC cutting series off as early as 8 issues in, many fruit-bearing plants never get to blossom. But with selling less issues than a ‘Challengers of the Unknown’ issue of “DC Universe Presents,” it seems to be pretty clear that “Voodoo” isn’t long for this world. Hopefully the character finds a home somewhere in the DCnU, or having been created by one of the co-publisher gives this title a little more of a chance to catch on.