After a long absence, “Where Is Jake Ellis?” is back. 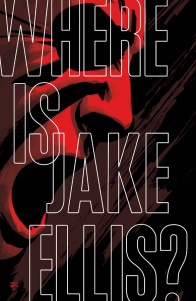 “CHAPTER NINE” Together, Jon and Jake will face a realization neither of them is prepared for. Does Jon have what it takes to save Jake and himself?

When a book has long breaks between issues, it’s hard for it to pick up that lost momentum, especially if there’s a dense plot. And “Where Is Jake Ellis?” has been on a long hiatus, given issue #3 came out over a year ago. So going in to this, I was half expecting to have to revisit the prior issues to get myself up to speed. However, this wasn’t really necessary. Whether by design or good fortune, Edmondson’s writing in this issue is lean, with the more complicated parts of the conspiracy dropping into the background, focusing instead on the core conflicts that have been a part of the series since “Who Is Jake Ellis?” #1, on mood, on action, and a big game changer.

It also helps that all the stuff in the Facility is familiar. In the past, whenever Jon had flashbacks to his time in the Facility, they were always blood red. It’s the sort of thing that sticks, so that when you come back to the book a year later and Jon’s in the Facility, all that red is immediately familiar. Except the red isn’t the flashback any more; it’s the present.

This time the flashbacks go back further than they ever have in the series, before Jon had ever been taken by the Facility. It’s a brief glimpse of a whole other life before it’s turned upside down. Again, these sequences are great because this stuff has been talked about in other issues, but a year later the details have become a bit vague. This is a way to refresh this information in a way that’s compelling and adds to the overall mood of the issue.

That and the parallel plot lines between past and present highlight the change in Jon even if you’ve never read an issue of “Jake Ellis” before. The Jon in the past is a guy that’s afraid to act, and it got him caught; the Jon of the present is willing to push himself through some very painful barriers never to get caught like that again, yet he’s also willing to put it all that on the line for Jake and Mollie.

A key component that made me love “Who Is Jake Ellis?” was the interaction between Jake and Jon. And I don’t mean the stuff when there are Facility agents everywhere, and there’s a big chase, etc. That stuff is great, but the interactions that really do it for me are when they actually have time to sit and have a conversation and their personalities clash a bit. It’s something that I’ve been missing in “Where Is Jake Ellis?” There was a bit of it in issue three, but in this one, while Jon is strapped down trying to escape his bonds, they get to talk again, to fight a little. It’s short, but it was a nice beat to have in there and a necessary one too. It gives the reader a chance to feel the gulf between them that was created in the fallout of “Who Is Jake Ellis?”

On the art side of things, this issue is a little mixed. For the most part it’s excellent, but other bits hit off notes. Specifically, page 2 made me stop altogether, baffled by the artwork. The artwork is cruder, the composition wasn’t as tight as it usually is, and the posing was awkward and stiff. Some elements didn’t even look like they were drawn by Zonjic at all — and that’s because they weren’t. A handful of pages have been drawn by a fill-in artist, Jordan Gibson, instead. It’s much more noticeable in the early pages when the pace is slower and I tend to linger on the panels more; the later sequences are much smoother, though there are still tell tale signs. They are clearly drawn by a less experienced artist.

To be fair, it’s a tough job imitating Tonci Zonjic. It’s just unfortunate that a fill-in artist was required at all, especially on a book like “Jake Ellis,” where Zonjic’s composition and color are such a huge part of the attraction for me.

Speaking of colors, these were used to powerful effect in this issue. “Jake Ellis” has always used colors in interesting ways, especially in setting up locations in both time and space, which is crucial during the sequences of non-linear storytelling this series frequently uses. Here, the colors of each environment are oppressive, giving an extra punch to the story as the black scenes and the white scenes come to a collision point in the final pages. Of course I can’t talk about it too much because that would veer into spoiler territory, but what I will say is that these final pages are the most impactful in the series to date. Edmondson takes full advantage of the premise and pushes at the boundaries in a way that’s very satisfying.

This was my favorite chapter so far. Edmondson and Zonjic raised the stakes further than they’ve ever been before in a series that’s always been tense at the best of times. It’s surprisingly easy to dive back into the world of “Jake Ellis” again. Bring on Chapter Ten.