Brandon Seifert and Lukas Ketner greatly impressed with the first six issues of Witch Doctor. Now they’re back with a new five-issue mini-series. Can they live up to the first one’s standards?

Let us find out below. 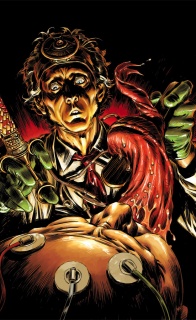 The breakout medical horror hit from ROBERT KIRKMAN’s Skybound imprint is back on call!
Even the world’s leading expert in supernatural disease needs to unwind sometimes. But when Dr. Morrow wakes up with no memory of what – and who! – he did last night, is it just a case of partying too hard… or something more malignant? (Hint: It’s the malignant one!)

It’s been nearly a year since we’ve seen Dr. Vincent Morrow, Eric Gast, Penny Dreadful and the rest of the world of Seifert and Ketner’s “Witch Doctor,” and it’s been missed. In my mind, it’s kind of a spiritual blending of The Goon and Hellboy, as it bridges the gap between the comedic and the horrific incredibly well.

With a year having passed and Seifert being a very busy guy in-between (with plenty of work, including the new “Hellraiser” book he’s co-writing with Clive Barker), we had started to wonder when we’d see more of these guys. Thankfully, they’re back, and the first issue of “Mal Practice” is a solid effort in the same vein we’ve seen from them before.

Seifert’s character work is really the strong point here, as Dr. Morrow is a perpetually entertaining and fascinating lead. He’s an incredibly gifted man, but someone with very human flaws for someone so attuned to the supernatural. This issue finds him doing what he does best: excelling at his job but failing miserably at his personal life. The way those two aspects play against Penny Dreadful’s general existence (Ketner does a great job of showing her disdain for his actions) is one of the consistent comedic high points of the book, and this issue is no exception.

The storyline continues, to a certain degree, the “freak of the week” pattern we normally get from this book, but now with an overarching story to play through the mini-series. Turns out Dr. Morrow picked a bad woman to take home from the bar, and that’s going to be the thread that drives Mal Practice. It’s an effective story beat, and it works perfectly because the situation plays well into every characters’ strengths and weaknesses.

In the first mini-series and one-shot, the strength for the series, at least for me, was Lukas Ketner’s art. Oddly enough, it was arguably this issue’s weakness in my book. While it was good overall, there were enough moments where the character work felt rushed and inconsistent that it threw me off. When I had read Witch Doctor previously, I was totally bowled over by his art. Now? I’m a little softer on the praise, as he really hit a lot of the big comedic moments and some of the more horrific ones, but like I said some parts (mostly in the beginning) felt off.

Overall though, this is a decent open for “Witch Doctor: Mal Practice.” We’re set up to have a lot of really fun and interesting (character wise) things happen throughout, and any of the problems I had with it could easily be cured in issue two. One way or another, I’m excited the book is back, and I’m looking forward to seeing what’s next for the troubled Dr. Morrow.