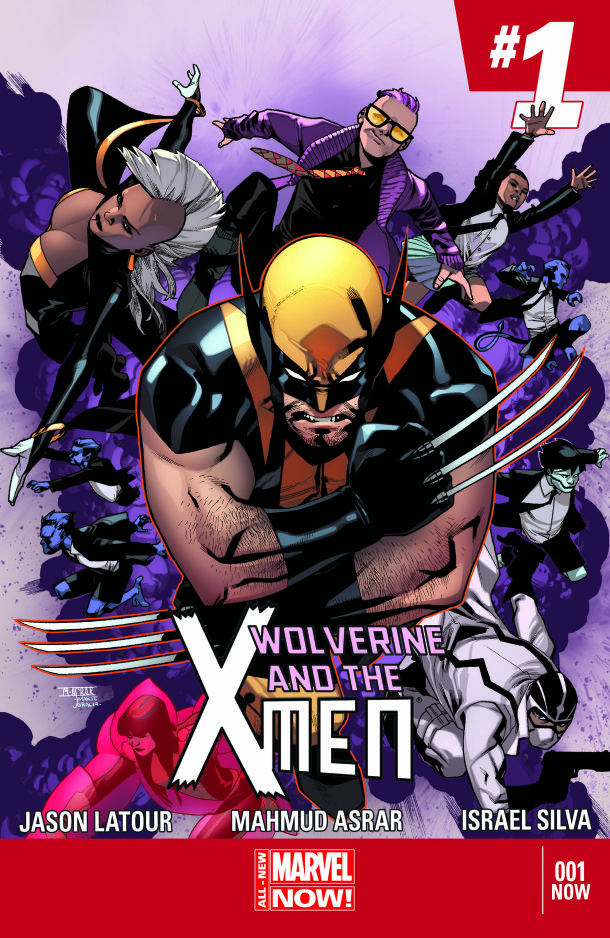 The Jean Grey School for Higher Learning opens for summer class in the relaunched “Wolverine and the X-Men!” Read our review below! 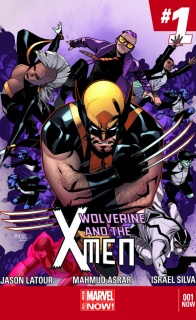 WELCOME TO THE JEAN GREY SCHOOL OF HIGHER LEARNING! The ALL NEW MARVEL NOW smash hit series schools with Jason Latour (WINTER SOLDIER) and Mahmud Asrar (X-MEN) leading the charge with drama, action and homework(?)! World-famous X-Men Wolverine, Storm, and a star-studded faculty must educate the next generation all-powerful, but inexperienced mutants! But with their own lives steeped in deadly enemies and personal crises, how can the X-Men guide and educate—let alone defend—the school? At the Jean Grey School, you never know who will enroll…or who will lead the class! And what mysterious organization waits in the shadows to destroy Wolverine’s mutant sanctuary? These questions and more are answered in the All-New Marvel Now sure-to-be-smash, WOLVERINE AND THE X-MEN #1!

The X-Men have always been about the future. I mean, yeah there are times where the literal future shows up at their doorstep to kill them (“Battle of the Atom” is just the most recent example and Days of Futures Past will bring that trend to a mainstream audience. More than that though, X-Men’s been about the future of humanity: the evolution of our species into something better, the homo superior. In that respect, Marvel’s succeeded admirably in building a future for its young mutants, especially in the last volume of “Wolverine and the X-Men”, a series that unified a generation of new X-Men. Unfortunately, it was also a title that was occasionally marred by crossovers with the “main” X-Men teams, resulting in a shift of focus from the students to the faculty which, while intriguing at times, never really gave the future X-Men their own corner of the X-Universe at times. That problem seems to be, in some ways, resolved with the new “Wolverine and the X-Men” which is putting its focus squarely on the students.

Picking up on a number of threads from “Uncanny X-Force”, “New X-Men” and “Wolverine and the X-Men” that have been relatively untouched, the new “WatXM” looks to finally give us the moments we’ve been teased for years, or at least more plots relevant to them. If Marvel NOW! is really a new era in the age of Marvel, then the new “Wolverine and the X-Men” shows that the future we’ve been warned of, specifically the ones of Idie, Quentin, and Kid Apocalypse, may be closer than we think. Latour’s teasing of the plots set up by other writers is interesting, but he never lets them drown out his own voice. His dialogue, especially for the series’s de-facto central character, Quentin Quire, is sharp and clever. Also, it’s quite possibly the first canon reference to Brony culture Marvel’s done so take that as you will.

One of the things the last volume of “Wolverine and the X-Men” was noted for was its resemblance to the “Baseball Game” days of the Claremont era. Mahmud Asrar’s art doesn’t quite capture that zany sort of style, fitting in more closely with a house style sort of vibe, but that hardly damages the book at all. Even though it’d be easy to think this is an attempt to darken one of Marvel’s most colorful series, Asrar’s art instead captures a high-level of energy that simultaneously delivers great comedy (“My Little Brony”) and some excellent action scenes (oh man, that opening.) Similarly, Israel Silva’s coloring is also much more toned down than what we’d expect at points but the bright colors we’d expect from the Jean Grey School can still be found underneath his excellent use of shadow.

If there’s a major fault to be found in this relaunch, it’s the fact that it doesn’t seem to go all the way. Even though I said most of the focus seems to want to go to Quire and the other students, Wolverine, Storm and Fantomex are a huge part of this issue. While Storm is always appreciated, and heaven knows she’s easily the best X-Faculty member at this point, Wolverine and Fantomex’s scenes were just kind of confusing. Not in a really fun way just in a “Wait Fantomex literally showed up at the graduation last week, why does he have a space pirate arena? Also why does Wolverine not have an eye?” Scenes like that are just kind of distracting parts of an otherwise stellar intro to a new school year for the Jean Grey School. Even though the writing’s a bit disconnected at points, the characters are charming and the art is stellar. There’s no point in really trying to compare it to the last volume, as the team here seems to be looking for something radically different, but definitely not a carbon copy of what Aaron and his collaborators did last time. Basically, if you enjoyed the last volume, you should feel mostly at home. If you didn’t read the last volume, then I’d spend a few hours on Wikipedia first. Trust me.

Final Verdict: 7.6 – While not a great “jumping-on point”, still a very enjoyable comic.