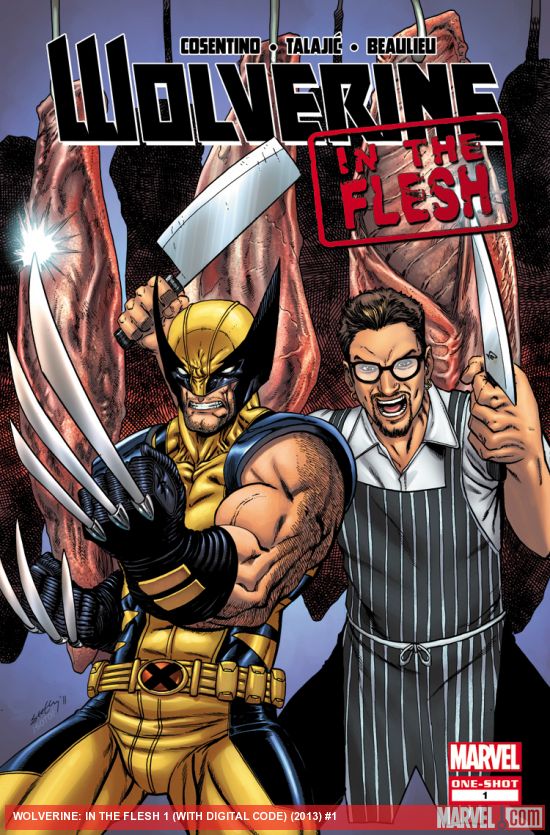 Did you know that reality star and celebrity chef Chris Consentino wrote a comic about him hanging out with Wolverine? Did you even know who he was? Don’t you feel emptier for knowing both those things? Hit the jump for our SPOILER-filled review.

Spoiler-free version of a review for a comic you probably have no interest in buying: Just don’t buy this comic, it’s genuinely the worst thing I’ve ever read. Spoilers to follow for the rest of this review since this comic is so bad that it really just needs to be discussed in detail. 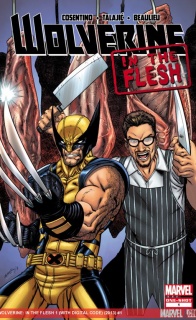 • Reality star Chris Cosentino tells a tale about Wolverine and food like only a Top Chef Master can!
• Adamantium claws meet steel kitchen knives in a culinary caper staring your favorite
costumed Canadian!

Ah, the old celebrity/comic book crossover. It’s a time honored tradition. Spider-Man and Jay Leno, Punisher and Eminem, Cable and Alan Alda. They’re fun little stories that get non-comic fans to check out a comic for their favorite celebrity and give the celebrity a chance to say they were in a comic with their favorite character. Most of the time, though, the comic isn’t written by the celebrity in question. Yes, Eminem got some say in how awesome he was compared to the Punisher for his crossover but Eminem is insane and fun so his input could only help his comic. Unfortunately, Chris Consentino doesn’t know what fun is because there’s not enough room up his ass for both an imagination and his head.

Tragically, as a result of being a “celebrity” and probably kidnapping someone’s family, Chris Consentino was given free reign to write a one-shot featuring himself and Marvel’s feral mutant, Wolverine. And let me tell you, if that statement doesn’t get you excited then you’ve passed the test and are not Chris Consentino’s family desperately searching the internet for one good review of this comic.

Before we begin to discuss “Wolverine in the Flesh” (there’s no colon in the title, I checked), let’s discuss who the hell Chris Consentino is. Chris Consentino won season four of Top Chef Masters. He’s also the owner of the single most unprofessional Wikipedia page on the internet. I know, I don’t think that’s a qualification to write comics either, though the same can’t be said about his part-time job as head coach for the NYU Ice Hockey Team. Point being, he’s a celebrity chef who is not Gordon Ramsey or Guy Fieri. In fact, he’s mostly well known for his offal dishes which involves using the internal organs of an animal as part of the meal.

As a master of this cuisine, Consentino apparently becomes the number one homicide detective in the Marvel Universe.

What goes down is that Wolverine is just strolling along San Francisco on his day off from being a part of every part of the Marvel Universe when he stumbles upon a murder. The nicest coroner in the world sees Logan creeping in the crowd and invites Logan to come down to the morgue sometime to help him find the killer. Wolverine notices that the body was cut up, almost like the crime was done by a butcher!

Now, Wolverine has roughly a thousand things to be doing, why does he take the time to track down one serial killer that will probably get arrested relatively easily? Because the entire town of San Francisco is rioting and will tear this town the fuck apart if the cops don’t catch the killer right the goddamn now. Thankfully, Wolverine is best friends with Chris Consentino because whatever and recruits Chris’s help in finding the killer. They go to the morgue and Chris deduces from the cut marks that “YES THIS WAS DONE BY A BUTCHER LOOK AT HOW THEY CUT THE BUTTOCKS THAT’S A THING BUTCHERS DO!” Consentino then proceeds to get sick over looking at a dead body.

What follows this is the most needlessly hostile scene I’ve ever read in a comic book. The coroner jokes that, for a guy whose whole job is butchering animals, Chris is a baby for vomiting a dead human. Chris responds with “I BET YOU’RE A VEGETARIAN!” Before anyone can follow up that not-insult with a “Yeah, probably.” Wolverine backs up Chris with  “HAH! HE CAN SMELL YOU A MILE AWAY. I GUESS WHAT THEY SAY ABOUT YOU VEG-HEADS IS TRUE!”

What? What’s true?! That vegetarians smell? How is that even a stereotype. The only other explainable option is that Wolverine is saying “veg-head” as a simile for “stoner” and I don’t want to believe that Chris Consentino is so lame that he has the unironic humor of the dad from Freaks and Geeks, but the only alternative is that he just cannot be bothered to finish. (In interviews, his wife confirms this. )

Then, Chris lets out this “insult” the length of a neo-conservative manifesto: “You think eating a vegetarian diet is good for you? Have you looked in the mirror lately? You look dead yourself! Do you sleep in one of these [morgue coffin things that if Consentino couldn’t be bothered to research the name of then neither will I]? Which one is yours?” No part of that rant makes sense. The coroner guy looks old and bald but other than that he’s fine. There’s no fucking reason for Consentino to go into a six panel long rant about why vegetarians are wrong that reads less like an argument and more the sounds of an adult diaper being soiled.

However, this choice flame causes the coroner to leave and Chris to exclaim “Sorry! I couldn’t resist.” Resist what? Farting out of your mouth to defend your passion that no one was arguing against? As a vegetarian, this scene made me feel needlessly attacked in ways I hadn’t felt since I looked at the Wikipedia picture for Chris Consentino.

Dalibor Talajic must dislike Consentino as much as I do because that last panel features Consentino with the most punchable face in the world. Basically all of Talajic’s art is fine but when Consentino shows up on page he’s drawn with this aura of smugness that never leaves. Talajic could seemingly go on to become pretty good, which is why I’d rather not insult him and WILL try and minimize his involvement in this issue. He deserves better than this.

Anyway, after once again stating that the killer is indeed a REAL butcher, Wolverine and Chris cruise around San Francisco looking for clues. They find a dead body in seconds. The San Francisco Tourism Board paid big bucks for this comic. Chris notices a food wrapper in the alley where the dead body and declares that it must belong to the killer. In any other fictional world where he wasn’t narrating his own mystery, Consentino would’ve been mocked by Wolverine before being left in the alleyway with the dead girl. However, Chris’s intuition pays off and he and Wolverine follow a food truck to an abandoned warehouse.

The only thing more original than murders occurring at an abandoned warehouse is the murderer, The Bay Area Butcher, who wants to create a culinary masterpiece out of mutant flesh because “girls would never talk to me in high school.” Say what you will about murdering and eating people, but at least BAB didn’t react more violently to constant rejection and do something real awful like writing “Wolverine In The Flesh.”

Wolverine and Chris stake out the warehouse because Consentino knew that’s what cops do on TV shows and he’d be damned if he couldn’t win the world record for fastest comic script ever written. So Wolverine just waits in a car instead of, you know, being a superhero and investigating while Chris goes home because his own script is starting to bore him. Unfortunately, Wolverine ends up going into the warehouse because the stakeout clock timer ran out and he ends up being immediately tied up by the Bay Area Butcher. Consentino calls his family to tell him he’s coming home but his son asks about what will Logan do and Consentino remembers “Oh! Yeah! Totally left that dude with a serial killer we were vigilanting” and runs back to help.

Wolverine breaks free and beats up BAB and Logan and Chris become the heroes of San Francisco. Wolverine ends up helping out at Consentino’s restaurant where he remarks about how hard Chris’s job is compared to his own! Ha ha! The food service industry.

Finally, the ominous last panel shows a guard calling BAB in prison “fresh meat” to which BAB replies “Indeed.” I don’t know what that means and neither did the writer.

I don’t know what any of this comic meant. It was the worst type of fan fiction: characters not acting like themselves in order to talk about how awesome a Mary Sue (Chris Consentino in this case) is. “Wolverine in the Flesh” should’ve just stayed in Consentino’s headspace and not had money spent on its production. The only possible joy you could derive from this comic is being Chris’s creative writing professor and finally being able to give him the C- he needed to just pass your class and never retake it.

I honestly would not be half as harsh on this comic if it were just a bad comic, but Consentino’s boorish personality oozes onto every page and attacks anyone, vegetarian or not, who might want to give him a fair chance. This is a weak comic book written by someone who should stick to cooking and illustrated by someone who should keep this title on their résumé in point one font.