More than any other superhero book currently being published, “Wonder Woman” is a soap opera. Tales of familial jealousy, betrayal, switching allegiances and mysterious pregnancy were scattered throughout the first arc. There are flashy locales, brawls between scorned lovers, secrets kept from birth, and more trash-talking than an episode of The Real Housewives of New Jersey. I’d never have taken Brian Azzarello for a fan of soaps, but the evidence here might incriminate him. 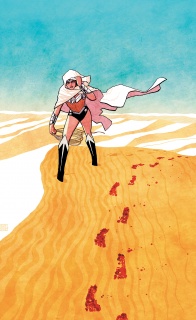 – A terrible betrayal forces Wonder Woman to make a deal with the gods who want her dead!
– Ares, god of war, takes a sudden interest in the Amazing Amazon!

In much of the press for this upcoming year of “Wonder Woman,” Azzarello has been claiming that this is a story that, while tying into the first year, is a totally different story. And while there are some new things happening here, much of this feels like epilogue to the first year, rather than the start of something new. We are still with Diana and Zola, and the search for Zola’s baby has replaced the “on the run with pregnant Zola” agenda, this is still very much a story about protection.

In addition to Diana trying to protect Zola, the other children of Zeus are trying to protect their spots of power in the new Olympus. Under the new leadership of Apollo, Olympus now resembles a resort; a tower of glass and steel with a roof pool and a cabana bar. In many ways, the gods in this story occupy a dual existence between the ancient and the modern; while they are sipping margaritas, they are still consulting oracles. Dionysus, while still wearing bird feathers, also wears leather. The gods fear Diana and her power, but seem to fear her the way that the ultra rich fear an uprising of the poor – the possibility is there, but they don’t really think the peons can get their shit together enough to make a real difference.

I don’t know if it is due to Azzarello’s playing in the “Before Watchmen” universe that inspired him to set the opening pages in Antarctica, but comics’ favorite locale is represented here as a spot where scientists are searching for something, or someone. They find someone calling himself “the first born,” who bites the head of one of the team and declares that he needs no help. He claims he has no name and is the “crippler of souls.” Is this the first child of Zeus? Is this the first man of Earth? Perhaps is this the first New God, preceding Orion, who was teased at the end of issue #12?

A common critique of the New 52 has been the lack of true connectivity between some of its series, with “Wonder Woman” and “Justice League” being a common example. Wonder Woman in “Justice League” and in her own title aren’t exactly simpatico. Azzarello makes a small concession to the connected universe here through a little joke involving ice cream. In “Justice League” #3, we see Wonder Woman enjoying ice cream and calling it one of the greatest things she’s ever tasted; here, Hera tastes ice cream for the first time, and has a very similar response. While not exactly bridging the two interpretations of Diana together, it exhibits one connective thread: these people love ice cream.

The art in this issue is by Tony Akins, the penciller who fills in for Cliff Chiang regularly on the book. Akins and Chiang share a tonal similarity in their work, and Akins does fine work here, especially with the gods. From the Azzarello lookalike War to the newly minted Apollo, Akins manages to keep the characters looking as iconic as Chiang does when he’s drawing the characters he helped design. Chiang, in my opinion, handles the mundane scenes a little better than Akins does, but that is a small complaint. More books should adopt the approach of these two artists, where similarly minded folks fill in for each other and create a book with a tonal consistency, no matter which is drawing. That way, these mid-arc fill ins don’t feel jarring.

The issue ends with Diana searching for Siracca, another child of Zeus, who may be able to help find Zola’s baby. There is a nice bit of misdirection here involving a small child that, initially, seems to be heartbreaking. Azzarello does a nice job throughout of setting up expectations and then dashing them and, in doing so, creating a story that keeps the reader on their toes.

However, the issue does come off as a bit slight, especially after teasing Orion in #12, along with the incredible Silver Age tale in #0. The first chapter of any new arc needs to lay groundwork, but it also needs to entice the reader, and this issue does more of the former than the latter. If anything, the book has been so strong (even during its controversial moments) that a slight misstep is noticed more than it is for a lesser book. But perhaps part of that is the fan base anticipating the arrival of Orion, dying to get their New Gods on. Since Orion graces the cover of #15, it won’t be long, folks. It won’t be long.

Final Verdict: 6.5 – Buy, knowing it gets better from here