This is nowhere near an original thought, but one that bears repeating: for an iconic character, Wonder Woman doesn’t have the pantheon of classic stories her contemporaries do. Ask for a fan’s classic Diana story, and there are a few answers that get tossed around, but none at the level of a “Year One” or a “A Superman For All Ages.” The character has been reinvented, retooled, and abandoned more times in the past 30 years than just about any other A-lister, and in the process has had very few extended runs that could truly be considered classic.

If DC doesn’t mess this up, readers will soon have an answer to that question, and that is the Azzarello/Chiang/Akins era, and this issue illustrates all the reasons why that is so. 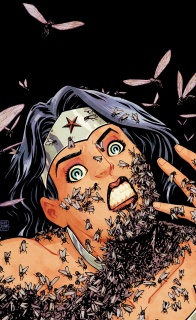 – Wonder Woman and her half brother Milan must grapple with the dangerous New God known as Orion!
– What strange alliance has the terrifying First Born made?

First and foremost, to read and love “Wonder Woman” requires reading no other comic whatsoever. With the exception of seeing Diana pop up in other books, nothing from this book touches any other DC series at all. So, despite there being lots of characters, as long as you’re reading this series you know literally all there is to know about them.

This issue gives the first extended look at Milan, another one of the children of Zeus born in the 20th century. He is best described as a blind, homeless, perhaps mentally ill, soothsayer who commands an army of flies that act as his eyes. He is a sympathetic character who can appear both simple and terrifying in equal parts, and is one of the few morally uncompromised children of Zeus, besides Diana, that has been introduced so far. Azzarello has been very good about introducing characters with a specific purpose, and then letting them drift back into the ether of the series, ready to pop out again when needed, like Hephaestus did last issue. While it appears that Milan is not going to be a major player right now, the seeds are sown for a future comeback.

Here we also get the first glimpse of Zola and Hera out on the town, openly defying Diana’s orders. For a book about gods and demigods, a scene at a bar can do a lot to bring the series down to a more manageable level. In fact, the book presents gods in very human surroundings, but acting like anything but human most times. This scene, especially when Ares joins them at the bar, presents the characters in the setting in a way that is rarer than it should be. Many times in superhero comics, the locales could be swapped out, because they are just set dressing for action sequences. But this scene could only take place in a bar. That may sound like an odd compliment, but it is one, regardless.

Most importantly, this book presents a strong and interesting take on Diana herself. The Diana who stars in this book has little to nothing to do with the Diana in “Justice League,” and that is probably for the best. This Wonder Woman is courageous, brave, loyal, kind, and probably a little naive. Last month, she trusted Zola and Hera to sit in a hotel room all day; here, she has no problem sitting on a sewer floor talking to her “brother” and be totally open to his, unusual, circumstances. She shows none of the doubt or edge that Lennox does.

One of the unique aspects of this book has also been its, relatively, singular purpose. Zola’s pregnancy was the event that kicked the series off, fueling the entire first arc. Now, her baby is the instigator for this year’s story, and we see a throughline that starts at the first issue and continues all the way until now. I don’t know if more than one or two other New 52 series have had a more continuous or focused plot.

This isn’t to say that every book needs to be a multi-year epic – quite the opposite in fact (I’m a huge proponent of one and done stories). However, if the goal is to tell long form stories, then “Wonder Woman” is a great prototype to follow. Not only does the story build, consistently but never boringly, but the original thread for this story – Zola’s baby – is referenced at least once an issue, with an obvious exclusion of the #0 issue which took place years in the past.

I’ve read the phrase “every comic is someone’s first” somewhere, and “Wonder Woman” is ok with that, and provides an easy enough jump-on point each month, but certainly rewards the long term reader time and time again.

This issue continues the second year’s side story, which is that of the “First Born” in Antarctica. Another child of Zeus, albeit one seven thousand years old, First Born is seeking his armor and, along the way, must fight giant ice creatures. This story is the weakest part of the series thus far, if only because it has not been properly developed or spotlighted quite yet. The story is presented in dribs and drabs, and without too much emotional context, it can often feel like an unwanted detour from the main story. This issue’s events are a little more connected to the main story, but it could still use some additional focus.

This is only the second issue of the second year’s story that has been illustrated by Cliff Chiang; Chiang has been providing covers, while Tony Akins has been handling the interiors (except for issue 14, where Akins did layouts only). Chiang is one of the finest artists in the comics medium, and he really puts on a master class of why this issue. Incredibly detailed character work, fluid action, and some truly terrifying images (Milan’s eyes, sweet lord) fill each panel. The book pulls off a neat trick, where Chiang’s issues make you realize how much you’ve missed him, but when he isn’t there, there is still such fantastic art that you don’t miss him. It helps that Akins and Chiang are simpatico in style and tone, but when Chiang shows up, the issues go from very good to great looking.

But more than anything, this series continues to push and redefine every aspect of itself constantly. In story, the main character initially refers to herself as Diana; later she takes ownership of the name Wonder Woman to signify her growth. But this happens outside of the story too – Orion is on a mission to Earth to stop a catastrophic event caused by a “New God” – Zola’s baby. Even though the solicit refers to Orion as a New God, that is a marketing strategy, not a plot point. Azzarello takes a term he knows we know and turns it on its head. This is clever storytelling, folks.

As the series pushes on, it continues to be like no other DC book. In fact, the tone and pace of the book is more akin to Brian Wood’s “Conan” or a “B.P.R.D.” story; this book feels like a Dark Horse title. By that, I mean that the series is not paced in a rushed manner, it has a dark (no pun intended) tone, and the art isn’t the standard superhero fare.

The fact that DC hasn’t, seemingly, interfered too much in this title is a pleasant shock. The book is selling decently, but is in no means a homerun sales wise, but DC must know that it has a winning team on “Wonder Woman,” since it is one of the very few books without a creative shakeup through its first twenty issues. For the love of gods, DC, keep your hands off of this book.