“World’s Finest” has evolved a lot in a short amount of time, finding its themes expanded upon, its characters more fleshed out, and, retroactively, given some credence to the horrid “Mister Terrific” series. How did the companion series to “Earth 2” get so good? 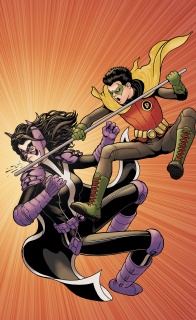 – What happens when Huntress, the former Robin of Earth 2, meets Damian? The same thing that happens when anyone meets Damian: a massive fight!
– Huntress has managed to keep her true identity on this Earth a secret so far, but with Damian on her trail, can the world’s greatest detective be far behind?

One of the problems with comics in 2012 is that people are afraid to go for broke. Just earlier today, our EIC Matt talked about how “Defenders” was a comic that was cool with being a comic, and a big-ideas one at that. Those books are disappearing, and with “Defenders” now gone, “Worlds’ Finest” is one of the few that remains standing.

This book has multiple genres that it plays around with, sometimes dividing the book in half to cover two of the more disparate themes, other times letting them weave in and out of each page and make for an chaotic reading experience. But make no mistake, this isn’t a book about subtlety: this is a book about doing everything you want it to do, all at once.

This issue is one that splits the book pretty much in two, with both stories taking place in the present, unlike a lot of the issues, which flashback to times on Earth 2. The Huntress half of the book is an espionage/caper story, with Helena trying to steal some money from Bruce Wayne, only to have Robin pop up. The Power Girl half of the book is a story about science, with Karen doing all she can to learn about how to get back to their home planet. Taken together, the book also is a quasi-road trip story, like Crossroads, if the girls weren’t vapid monsters.

This issue really highlights the differences between Karen and Helena, with Helena stealing money to establish a life here, and Karen spending her money to get home. It is Karen’s attitude that writer Paul Levitz has handled so well; he writes her as if she is on vacation. It is a pretty brilliant technique, and one that casts the character in a totally different light, even back to her days as a co-star in “Mister Terrific.”

In not so nice terms, Eric Wallace wrote Karen as a loose woman in “Mister Terrific.” She was seen as a rich plaything, and didn’t seem to have brains in her head, despite her wealth and supposed scientific knowledge. But, when considering Karen to be on vacation, it all makes more sense. We’ve all seen this before: at the hotel bar, there is that one person totally letting loose, beyond all appropriate measures. “I’M ON VACATION!” is shouted between tequila shots, and an hour later, they’re going back to their room with someone they would never agree to a date with back home. On vacation, your priorities, morals and behavior all shift.

Karen is at an all-inclusive resort world – she won’t be judged by her friends here, she isn’t damaging relationships with people she cares about, she is just having fun. So, she has no problem walking into a business meeting in a bathrobe – these people are fellow resort guests, not actual peers. She doesn’t care how they see her.

By establishing that dynamic, Karen’s character gets more sympathetic and also gets sadder. She is so uncomfortable on this planet that she refuses to accept it as reality. This diversion shall pass, and when it does, she’ll get her act together.

Helena, on the other hand, is trying to figure out how to survive here in the long term, and part of that is coming to terms with her heritage, or lack thereof, on this Earth. A big part of that is her eventual embrace, or downright dismissal, of the Wayne name. Her encounter with Damian, which is where most of the action takes place this month, is the first time the reader has been given any real indication of how pained she is over her circumstances.

Levitz also does a great job writing Damian; he nails both the entitled attitude and the detective skills he possesses. Damian has gone from loathed character to essential DC cornerstone over a very short amount of time, and Helena is, in part, acting as the voice of the comics audience 6 years ago, attacking Damian’s “right” to be Robin, and Damian acts as his own defense attorney. It is a fun dymanic, and one that really works.

Between the #0 issue and here, it is nice to see Maguire getting the bulk of the pencils. This is no offense to PÃ©rez, who does his usual solid work here, but Maguire is a truly underrated artist, and his handling of the Wayne quasi-siblings is playful and expertly drawn. His Power Girl, however, remains the weakest part of his game, as she looks somehow both bratty and robotic. PÃ©rez, on the other hand, gives Karen a carefree air and a bounce in her step that is totally missing when Maguire is drawing her. Overall, the art team works very well together, and I hope that both stay on the book for the long haul.

It is initially odd, however, that Helena decides she might trust Damian enough to reveal her true identity to him. However, again, this all plays into her motivations vs. Karen’s. She has accepted her fate as a denizen of New Earth, so she might as well begin to embrace her surrogate family, rather than pine for people who are a) dead and b) buried in another dimension. She sees herself, partly at least, in Damian, and any small sign of belonging is something Helena will accept and grab on to.

This issue is also the first step to connecting this book to any book besides “Earth 2” that DC is currently publishing. We get a glimpse at Supergirl and Robin, the New Earth versions of our heroes, and we see their relationship to the heroes of this world taking shape, with Helena looking for a connection and Karen looking for avoidance. Whether this book moves towards the DCnU center remains to be seen, but as long as it continues to be stuffed full of ideas, differing directions, great art, and fun stories, it will remain essential reading.