Marvel’s OTHER big event begins in this week’s “Battle of the Atom #1!” Is Marvel putting out too many crossovers or will “Battle” be worth the cash? Read on to find out. 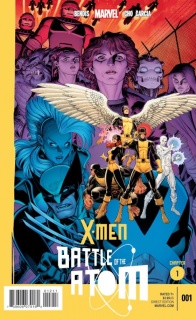 • The past, present and future of the X-Men collide in this 50th Anniversary event crossover! When investigating a new mutant, something truly horrible happens to the All-New X-Men that shakes time and space to its core. This is so dire that X-Men come from THE FUTURE with a message: THE ALL-NEW X-MEN MUST RETURN TO THE PAST!
• The ten-part crossover starts here with superstars BRIAN MICHAEL BENDIS and FRANK CHO!

There’s something somewhat problematic about the huge amount of publicity comics do for their events. If you go anywhere online, including our humble site, you’ll hear the basic plot descriptions for any and all comics coming out. As a result, “X-Men: Battle of the Atom” lacks a certain punch due to any prior knowledge the reader has. That said, if you have no idea what Battle of the Atom is about, go buy it right now; it’s actually pretty awesome if you don’t know the twist. But if you do know that the X-Men from the future show up (oh hey it’s in the solicit) then you’re basically buying the solicitation in twenty page format. That’s not inherently bad or anything — the writing is great and Cho, Immonen, and Grawbadger do some really cool art, but it is a little disheartening to have the first major issue of a crossover be an extension of the solicit.

That said, even though a good chunk of this might be blatant plot details you’ve heard of before, it’s still a really well made comic.

One of the reasons for that is Frank Cho who draws the ever loving heck out of his segments of the book. There’s tons of great panel layouts, one with Past!Jean Grey being particularly impressive. Also, the designs for the Future X-Men (20XX-Men) are so cool — like, so flipping cool.  Not only that but they include some of the absolute best mutants possible for a dystopian future team. We’ll try not to spoil anything too big but if you like comic books that Brian K. Vaughun wrote for Marvel, you might enjoy a particular member of the new team. Unfortunately, Immonen and Grawbadger’s artwork, while very good on its own, doesn’t flow as smoothly with Cho’s. They’re not bad really, just a little distracting.

Speaking of distracting, the time travel shenanigans here don’t entirely make sense. If you’re the type of person who can just roll with the usual loops in logic  that come with time travel, congratulations, you’re awesome. If not, you might have some problems with this issue (but you should probably relax and have a nice snack). While the time travel itself only grazes past the normal inconsistencies that accompany the idea itself, the future X-Men do a really good job of not making much sense. Spoiler alert, but you know how they say right in the solicit that the 20XX-Men want the 19XX-Men to go back to their own time? The Current X-Men were just about to do that. There was no reason for the future X-Folks to show up at all. It’s like tackling your friend before he can drink the poison only to discover that he was already putting it away. Yeah, your friend is now definitely not going to drink the poison, but now it’s all over the floor and you need to spend the money on nine more comics you weren’t previously reading. You were on a budget, 20XX-Men! Get it together!

This is still technically a review for “Battle of the Atom” but it’s important to note that most of the important events as of yet happen all the way over in chapter two, “All New X-Men” #16. The future X-Men who seem to only cause trouble? Actually turn out to be really awesome. Especially female Xorn; that’ll probably be mentioned a few times in the forthcoming weeks. So while both books combined make a really compelling story, this issue itself doesn’t stand as strongly by itself. Does it really matter? Hardly. Only way it could turn out really badly is if someone doesn’t know “Battle of the Atom” is a bookend and not the main series. So yeah, remember to buy chapter two as well.

“Battle of the Atom” may not be the strongest start to a cross-over with its relatively weak ending, but a good chunk of the book is still great. Sentinels? Stellar. Scott Summers? Superb. Kitty Pryde? Show-stealer. “Battle of the Atom” is, as far as we can tell, going to end up being a very fun storyline for the X-Men. This issue isn’t the big boom it could be and a lot of it was already spoiled through promotion, but it promises a great start to an interesting story.