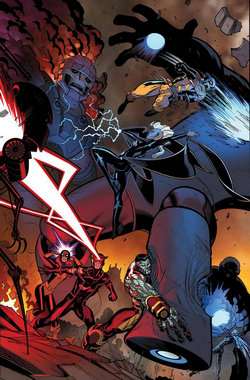 Marvel’s other crossover concludes this week! Read below to see if it gives a satisfying conclusion and changes the X-World forever! Spoilers: Not really. 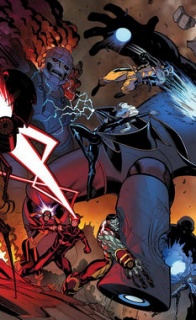 X-MEN: BATTLE OF THE ATOM, PART 10!
• The biggest battle in X-Men history will melt your face off.
• All of the X-Men find their footing in the world much changed.
• The X-Men event of 2013 concludes and sets up the major X-Men stories for 2014!

One day I’ll stop thinking that crossovers will change “The Face of Blah Blah Blah.” Unfortunately, that day did not come in time for Battle of the Atom. If you’re the type of to judge events based on whether or not they’re “significant” this is probably not the comic for you. In fact, a lot of comics aren’t for you but that’s beside the point. The major changes in status quo are minimal, with the largest ones being half-spoiled through solicitations already. Normally I really don’t mind if an event is more focused on telling a good story (which Aaron, Ribic, Cammuncoli and co. certainly do) but considering the grandiose in this issue you’d expect a lot more significant change. One caption reads “CAPE CITADEL MILITARY BASE. WHERE MANY YEARS AGO THE X-MEN WERE BORN. AND TODAY, WHERE SOME OF THEM WILL DIE.”

Yeah that doesn’t really happen. Again, I do not believe that death correlates to good, or even significant story, but there’s some false advertising here. Much like many events lately (Trinity War springs to mind, though the latest Infinity has some problems that will be discussed later) there’s no real resolution so much as a continuation for the next storyline. Which is awful here because Battle of the Atom has completely drawn me into every X-Title I wasn’t previously reading.

Jason Aaron and Esad Ribic are no strangers to epic collaborations; their run on Thor: God of Thunder is beyond metal. So having the two of them depict this issue’s titular fight just makes perfect sense. Ribic’s painted style is quite good at making heroes seem grand, and the scene in which those guys finally show up is the one of the most haunting images those guys have ever received. Is it even a spoiler to say Sentinels show up? They’re right on the cover and were advertised as showing up for the past nine issues. Okay, Esad Ribic draws Sentinels. Artistically, that’s all you need to know. That and if you play a drinking game for every time Ribic’s characters stand around with their mouths open, you still won’t drink as much whiskey as Jason Aaron.  Giuseppe Cammuncoli draws the second half of the story and his art here is almost Kirby-like, appropriate given the homages to the First Class era in the script. In all honesty, it’s a little jarring going from Ribic’s softer look to Cammuncoli’s messy Silver Age Redux aesthetic, but it doesn’t break the story and makes a lot more sense for the particular scene Cammuncoli draws than Ribic.

Even with the homages, Battle of the Atom doesn’t necessarily feel like a celebration of the X-Men’s 50 years. I mean, the First Class show up there’s no denying that, but it’s a lot more tied into what’s being going on with the X-Men since 2011, particularly Aaron’s characterization of Wolverine. There’s still a lot of off plot points to be expected from any crossover, but Aaron’s tying of this conflict into everything Logan and Cyclops have done in the past two and a half years solidifies their own story. This book however, the one with Event Fever induced leaps of logic and still no comprehensible grasp on how time travel works for the First Class, has a few frustrations in terms of plot consistency but is still fun and exciting as a “blockbuster comic” should be. Also, details like the Future X-Men’s Sorcerer Supreme still delight me. Demiurge!

Even though Battle of the Atom is hardly the conclusion to the All-New story, it’s better to think of it more as a season finale than the series finale it was being advertised as. The X-Men are going to be heading into some interesting places this upcoming year, and I’m furious that Battle of the Atom is driving me to shell out the money to pick them all up. While it’s not the singular story crossover comics are truthfully never expected to be in the first place, Battle of the Atom is still a fun, if not troubled, story that set up a tapestry for the X-Men that’s only upped the stakes.

Raze’s costume is still ridiculous though.