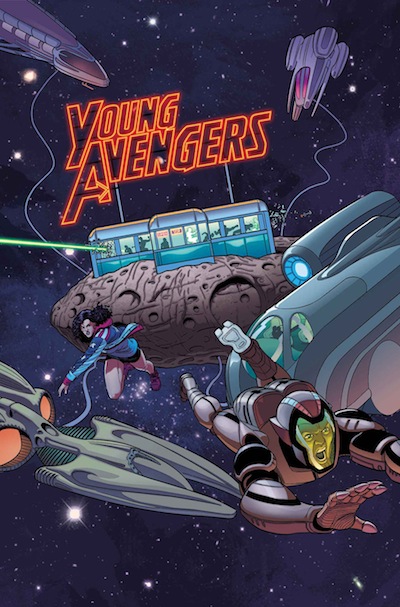 After exploding their parents for five issues, The Young Avengers take a (sort of) break in this issue! Read our review after the cut. 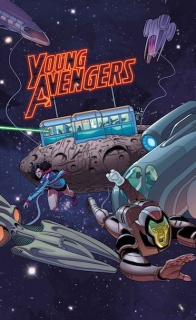 • Three months have passed for the Young Avengers. What have they been up to? Fun stuff, I’ll bet. The sort of “stuff” that makes an excellent super hero comic. THIS IS TRUTH WITH A CAPITAL EVERYTHING.
• A very important breakfast. A new Young Avenger. A selection of emotions.
• Oh – I bet you thought we forgot about those Skrulls from issue 1. We haven’t.

A little more than two weeks ago, Matt Fraction and David Aja won the Eisners with “Hawkeye #11”, an issue written entirely in “dog language.” For all intents and purposes, the reader became Pizza Dog and read the story, not through visuals and dialogue, but through smell diagrams, key words that any dog would recognize, and general dog logic. For all intents and purposes, it’s one of the few comics that truly comes from the perspective and thinking of a non-human. However, Kieron Gillen and Jamie McKelvie are too cool and glamorous for dogs (like dogs in general, Pizza Dog is never not fab). They wrote an issue from the perspective something less human than a dog. They wrote an issue from the perspective of millennial teenagers.

Taking place three months after the last story arc, issue #7 serves as both a recap as to what happened during that quarter of a year and a push into where the series will go next. The recap itself, is done ingeniously. No spoilers here, but just be rest assured that Yamblr is only the warning shot in the war the “Young Avengers” team plans to wage against all social media sites. The dialogue, or commentary, in the recap is also well written and it’s incredibly cool seeing the “Young Avengers” as teenagers messing with each other. The Young Avengers, as someone in the “Avengers Sassemble” letter column (which everyone reading “Young Avengers” should read) for this issue said, the characters feel like people you would actually want to hang out with and it’s a testament to Gillen’s skill as a writer for young characters that he’s accomplished this. Plus, given that he talks about how much he’s going to “destroy all the fan’s feels!” whenever he can bring it up, it’s sort of amazing that Gillen has been setting up a natural and devastating way to decimate the team’s inner workings. He’s essentially holding Tumblr’s favorite aspect of the book hostage, and it’s going to be a tense ride to see whether or not he pulls that trigger. Plus, on the pure plot side of things, the current story arc, or as I call it: The Patriot Act, just keeps moving along and it’s impossible to not want to know exactly what’s going on.

Jamie McKelvie, meanwhile, has taken “Young Avengers'” message of “Don’t Trust Anyone Over 30” to heart and draws in a style that’s decades ahead of its own time. Panel layouts? Two pages of this comic are Prodigy’s face. Credit pages? This credit page is a diner menu. The concept of panels themselves? Panels get broken for about the hundredth time over the course of the series in this issue. McKelvie is, with no extra amount of hype, at the absolute top of his game. This is a comic that’s rejecting old notions of what a comic should be to become something smoother, sexier, and cooler than anything else on the stands. “Young Avengers” is the coolest comic book being produced right now. McKelvie makes “Young Avengers” the most beautiful kid in the cafeteria who would never talk to you, and Gillen makes it the funny kid who would rant to you for hours about Robyn and it just melts together into one of the coolest kids to ever breathe in Marvel’s food hall.

There’s next to nothing wrong with this comic. The only real criticism is that the Skrull subplot gets rather quickly wrapped up, but that only leads to even better scenes of breakfast and smoochin’. This issue is all about the team and their interactions and nothing is more delightful than this ensemble of heroes. They’re like a family in only the way that only young post-high school kids forced together can be. Honestly, while there is a ton of action on page, the plot for the issue is talking but it never feels like that. This book always feels like there’s some beat bouncing in the background or an explosion happening somewhere; it never stops. Please, go read it. If you have ever been young, and we really hope you have been at some point in your life, this book will appeal to you. Maybe not in its (arguable) overuse of social media platforms and words like “probs,” but probs in its passion.

Final Verdict: 9.6 – Young Avengers gets an A+ for smooching.