Kieron Gillen and Jamie McKelvie have been pushing so many boundaries in their “Young Avengers” run with panel layouts, freshly authentic “young people” dialogue, and an energetic style that’s made it one of the sexiest books Marvel is currently publishing (right behind that upcoming “Volstagg” mini.) So how is it possible for the two of them to aim their wretched intentions at one of Marvel’s most desired characters and make them some how even sexier?

Read on to find out in our potentially uncomfortable review of the latest issue. 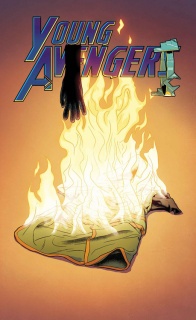 • They say you can never go home. For the Young Avengers, it’s not true. They can go home. It’s just that if they do, the universe may end. Better not go home then, eh?
• WHAT ARE YOU DOING, YOUNG AVENGERS? YOU’VE DECIDED TO GO HOME? GAHHKKH! YOU GUYS!
• Is Kate Bishop an enemy in waiting? Is this the last we see of the loveable/strangle-able Kid Loki? • Are rhetorical questions a cheap device when writing solicits? All answers revealed, except the last one, which you’ll have to work out by yourselves.

Prior to this issue’s release, there was a lot of speculation and spoiling go into this week’s events. Then at NYCC Marvel released an announcement basically saying this was going to happen sooner or later. So, whilst reading this issue’s “big plot twist” there was, unfortunately, a huge lack of surprise at exactly what happens. Thankfully, the panel (Tumblr, you know damn well what panel we’re talking about) that followed the big event was certainly striking and um… we’ve talked about Jamie McKelvie’s artwork and our love of it before… but…um…

Hotter damn than the one that powers the Las Vegas on a 120-degree fahrenheit desert afternoon.

We were reviewing a comic book right when we started writing this right? Okay, moving on.

“Young Avengers” #11 continues the downward crash that Very Special Guest from Journey Into Mystery has been delivering the Young Avengers in association with the mysterious Patri-Not and Mother who’s leading the charge to reign hell on our heroes. With this news, Loki and the team must prepare for what will be the series’s climactic battle between teenagers and their worst enemies: their parents and their exes.

One thing that is always startling when it comes to this book is Gillen’s grasp of understanding what it’s like to be a young person. I don’t even mean that in a general “old people don’t know how young people talk way.” Speaking as a “young person,” I can without a doubt say that Gillen, who if Phonogram and his Wikipedia page is to be believed is a member of the 90’s Britpop generation, understands young people in 2013 the way only a depraved man continually leering through Tumblr would. Or he might just have a very good connection with what the zeitgeist for this generation is. Who knows. He does, probably. Still, even without a single ounce of subtlety, Gillen just gets the types of fears and enemies teenagers face nowadays. Noh-Varr’s text-based confrontations in this issue sound exactly like every tension-filled reunion with an ex I’ve ever had. Hell, I’m sitting here with my current lady person getting texted by their ex and I swear it’s like Gillen is peering over our shoulders. I checked, and I didn’t see him, but I can still smell music critique in the air so who knows?

Equally talented, but less likely to spy on young people, Jamie McKelvie is consistently producing some of the most glamorous work in the industry, and none so fashionable as the characters here. Seriously, without going into the usual broken backs or physically improbably costumes, McKelvie makes all of his characters an almost cruel level of attractive.Not in a creepy way, just in a “How do you even make the human face that perfect?” way. On the flip side, some enemies like Mother have a huge amount of horror behind everything they do (especially what they do to Teddy, poor Teddy.) Other enemies like The Ultimate Nullifier are creepy in other ways, like by having amazing popped collars. Elsewhere, the panel layout, as in previous issues, is played around with in intriguing ways, and, towards the end of the issue, McKelvie gives us a layout of the Young Marvel Universe that looks like the “Telephone Hour” scene from Bye Bye Birdie updated for the modern age in what, once again, is another accurate depiction of modern teenage life.

And really, as a young adult, that’s what makes “Young Avengers” one of my favorite books. It somehow gets what it’s like to be a young person right now. This book will probably be dated in ten, maybe even five, years but that will be entirely on purpose. This book won’t be a relic, but a time  capsule of what it was like to be young as a “post-millennial” or whatever brand our generation gets. Sidenote: Are we millennials? I’m not entirely sure. Anyway, “Young Avengers” #11 is the final chapter in what can be described as the rising action for the series. As the final credit pages showed, the final curtain is ready to rise as the presumably painful third act begins. Still, even though this story may have some ending in sight, it will still be the one comic I show friends my age that make them go “Yup. That’s us.”

Then we reach that one page with that really good redesign and we go like this for the next twenty minutes:

Final Verdict: 8.8 – It takes a lot to out-Hiddleston Hiddleston, but by mischief god they did it. And made a really great comic too.