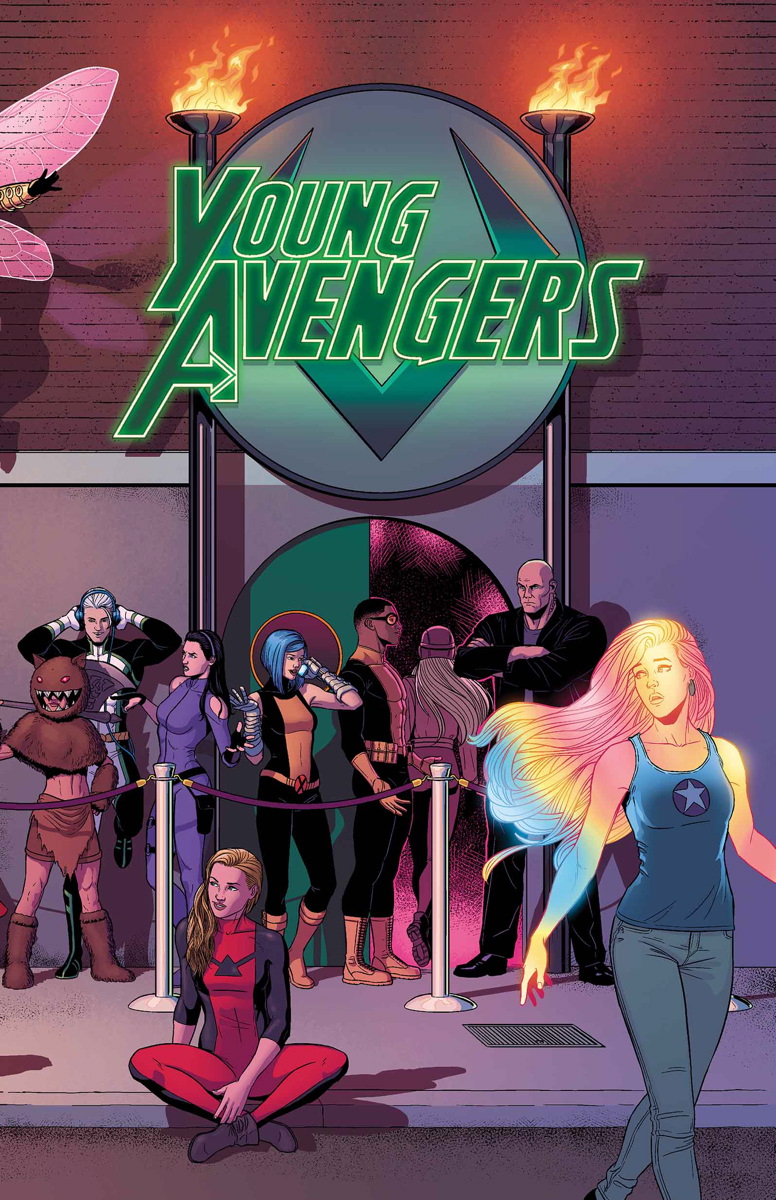 2013 is gone, dead and buried in a cemetery filled with Vine, doge memes, and everything else that made that year what it was. But before we can let go and move on to the new year, we must look back and say goodbye to one of 2013’s coolest, most stylish, and innovative titles: “Young Avengers.” Read our review below. Mild spoilers ahead! 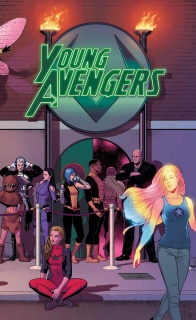 After the saving the world, there’s the after party. And after the party, it’s the hotel lobby. And around issue 15, we have to clear the lobby and then head to our rooms and do something jolly rude. MIC-DROP!

There’s something to be said for fan service. Could Gillen and McKelvie’s “Young Avengers” end with the final battle in issue #13? Yeah, probably. But with the two-part “Resolution” Gillen, McKelvie, and the bevy of talented guest artists round out each team member’s character arc, let the morals kick in, and give give fans one of the most emotionally satisfying conclusions to a Big Two series in a while.

One of the biggest complaints that I’ve seen from lurking Tumblr  is how Gillen doesn’t seem to really care about his characters and turned them into horrible one dimensional pastiches. Even now, a year later, I still wonder what haunted store these people purchased these comics from, because if anything “Young Avengers” Round Two has been nothing if not the most in-depth analysis of these characters and what makes them tick, as demonstrated extensively by both this issue and the last one, which have basically been opportunities to give each character the appropriate end to their arc.

The most shocking vignette, in terms of quality, would probably have to go to the opening with Noh-Varr. The technical quality of it isn’t that surprising. Becky Cloonan is a favorite at Multiversity and God strike me down if I fail to mention the life she gives her characters, from the expressions (and righteous moves) Kate has while she dances to the beads of sweat on a shirtless Noh-Varr(!!!) Coupled with Jordie Bellaire’s excellent colors, and the contrast between the yellow lights of the club and the way they turns Noh-Varr’s abs light blue i… I should really stop talking about a fictional characer’s sexy body before I seem worse than I already do. The main point I’m trying to get at is that Noh-Varr gets the spotlight he deserves, hangs out with a fan favorite from “Wolverine and the X-Men” and probably gets the most emotional moment in the series. To paraphrase something Gillen would probably say, Marvel Boy has the most “Robyn” scene in the series and the one that deserves the most praise.

The following scene, focusing on the black sheep of the Young Avengers, is essentially a long speech given to Prodigy explaining where the character has to go from here. It’s a shame to see Gillen journey (don’t’ say it) with Loki end here, but he gives the trickster a proper hand-off from Gillen to Ewing, though Ming Doyle’s art just doesn’t really do it for me here. Not for any drastic reason, but his lips seem sort of weird here and though his style would probably work better in a fantasy title befitting Loki, it doesn’t work as well in the party (or backstage of a party) setting of the comic. Meanwhile, the Prodigy vignette, which continues straight from the Loki segment, serves as another highlight of the issue. Joe Quinones does a great job giving us a Prodigy that’s become a lot more relaxed and comfortable with himself. No other character has gone through as much of an emotional change as David Alleyne has and his confrontation here with an old foe perfectly encapsulates what he’s overcome, both in terms of accepting who he is with his sexuality and his fate as a hero. It’s a pretty touching journey and if these segments are any indication we can hopefully expect to see a lot more of Mr. Alleyne in the future.

Finally, Gillen and McKelvie send off their team with an excellent farewell, as well as addressing a fact that, while never explicitly stated, has always sort of been in the back of the series. This revelation has already gotten a bit of flak on Tumblr as Gillen and McKelvie pandering to fans, well, yeah they’re probably a little bit right. Still, the fact that we even have a team with this type of make-up is a wonder, especially since the “thing” (you’ve probably guessed its queerness by now) never overtook the characters to replace them into stereotypes. It’s just a part of who they are, not something that explicitly needed to be said with their introduction like they were a character in John Mulaney’s “New in Town” routine. In fact it’s said with a casual repartee amongst the team members that beautifully illustrates where the team is to go from here. There’s no grand goodbye for these guys or dramatic cliffhanger. Actually, I’d go more into detail on what this ending is like, but for fear of spoilers I’m just going to tell you to listen to LCD Soundsystem’s “All My Friends” and read it for yourself.

In fact, that’s what I’d say to anyone, really. Just read “Young Avengers.” In fifteen issues, Gillen and McKelvie redefined the young superhero book with characters that, while energetic wisecrackers and lovelorn kids, never let the tropes that come with being young get in the way of their characters. Matched with Jamie McKelvie’s insanely innovative and layouts and just straight up (well not anymore) pretty yet detailed art, “Young Avengers” was the superhero comic of 2013.

Final Verdict: 9.4 – Buy, read, and then read again with the AfterParty playlist.