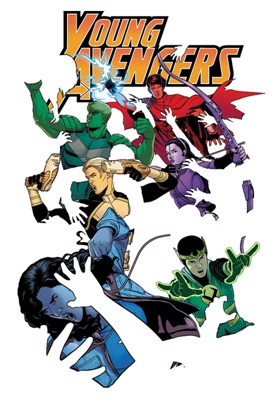 “Young Avengers” wraps up its first arc and if you read Journey Into Mystery bring some tissues. Minor spoilers ahead! 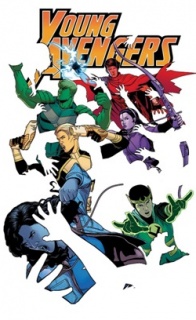 • The book where when a character says “I did it half an hour ago” normally means doing “it” half an hour ago reaches its first epic conclusion.
• Why Did Loki Do It? No one kno… okay, we’ll tell you…Well, part of it.
• Miss America probably punches someone. She usually does.

If there’s one thing Gillen and McKelvie’s “Young Avengers” has been since the first issue, it’s a party. No, not because the series with Kate Bishop waking up from casual Protector-ed sex. Since then, it’s been the loudest, boldest, sexiest book of the Marvel NOW! initiative. In fact, almost every single person at Multiversity was beyond stoked for “Young Avengers” and when the first few issues dropped it didn’t quite meet expectations. Sure, it was still a fun party, but “Young Avengers” was missing that last little inch, that spark, that would take the book from “great” to “must-read.” Well, if the first arc of “Young Avengers” is a party, issue five is you and your friends stumbling around facing an existential crisis while hailing a cab at two in the morning. And wow, is it beautiful.

Okay, so to complete the party analogy to completion, the first two or three issue was setting up the venue and DJ’s gear while the previous issue was pure sweat-your-ass-off dancing. Here though, the party has begun to die down, the party-goers are on their last legs dancing (or fighting parent-monsters; same difference) and the full weight of the series’s events come into view. Gillen has used almost every  opportunity he’s had to tease “Young Avengers” fans  about how much he’ll rip apart their “feels” and this issue features more than enough emotional gut-punches to send the nearest Tumblr user reeling. It’s almost comedic given the melodramatic shift in tone between some panels, but those moments are never too over-the-top. They’re elegantly brutal enough to make you whisper “Goddammit, Character Name Here” to yourself, especially when you take into consideration the slight tonal shift between this issue and the last. It’s twenty pages that are just as, if not more, fun than the previous issues but the serious moments show that there are plenty of layers left to be uncovered beneath the dancing, explosions, and Noh-Varr’s ass (two out of three of which, are thankfully aplenty in this comic.)

Of course, fires set to The Ronettes and interdimensional Kree butt could only get you so far, which is why Jamie McKelvie, as always, takes Gillen’s script and just completely runs with it. It’s not an overstatement to say that McKelvie’s art is one of the prettiest in the industry, James said while staring  too intensely at a close-up panel of Kate Bishop for the hundredth time, but McKelvie can do splash pages like nobody’s business. Plus, his redesigns for characters are just fantastic. Teddy pulls off some incredibly bad-ass shape-shifting in the aforementioned splash page and, minor spoilers, one character’s new costume on the final page is just plain cool. Seriously, while the whole issue in general is incredibly stylish and slick, if you love the team as much as the great writing and art should make you, the final two pages will just make you giddy with excitement at what the Gillen/McKelvie team has coming up.

However, it’d be incredibly unfair to praise “Young Avengers” without discussing its unsung hero. Normally in our reviews, we put just the writers and artists. This time however, we’ve also featured the “Young Avengers” letterer, Clayton Cowles, who is doing some of the best design work in the industry right now. The aforementioned “final two pages that are seriously so cool” would not have been as “seriously so cool” without some of the design Cowles puts into it. Not to mention a segment earlier in the issue featuring Billy that is simultaneously heart wrenching and just too beautiful to look away from. On top of all this, rather than the typical infodump that most comics’ recap pages are, each issue is a full-on Tumblr dashboard complete with unique users, posts, and tags. “Young Avengers” absolutely refuses to take the easy road and Clayton Cowles puts in so much effort to keep this book from being just the comic it would have been with just Gillen and McKelvie. And such a book would certainly not be bad, but with Cowles on the team, “Young Avengers” goes above and beyond to be one of the greatest looking books on shelves right now.

In the end, that’s what the team here is doing. They aren’t creating a book they’re throwing a party. Gillen is going around telling jokes and making some people cry their eyes out in the bathroom, McKelvie is tearing up the dancefloor, and Cowles is making sure that the place looks as cool as humanly possible. “Young Avengers” is the single coolest comic being put out by Marvel right now and it’s taken a total life of its own from the original Heinburg/Cheung run. It’s funny, it’s sad; it’s beautiful and it’s doomed; “Young Avengers” is one of the most exciting comic being published today and a must-read.

Bonus: If you have the option to pick this series up in trade or in single issues, the singles are worth it alone for the letter column, “Sassemble” where Gillen constantly threats fans with atrocities like writing an issue completely in Comic Sans.