I’m all for fun in comics – really I am. And a Valentine’s day anthology featuring some of DC’s most famous couples? That should be a ton of fun!

So why are so many of these stories so sad? 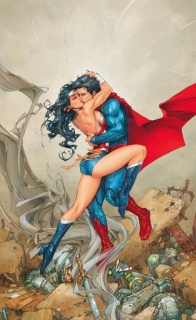 • Romance is in the air in this very special Special!
• Wonder Woman consults Eros himself about her feelings for The Man of Steel.
• Barbara Gordon has always been too busy for romance, but could her role as Batgirl bring her back to the first guy she ever kissed?
• Following the events of “Death in the Family,” how can Catwoman ease Batman’s troubled soul?
• Aquaman makes waves as he treats his wife like a queen for a day.
• From the pages of STORMWATCH, Apollo and Midnighter celebrate Valentine’s Day separately but with each other in mind. Who—or what—stands between them?
• Dick Grayson and the daughter of Lucious Fox meet-cute!
• Plus: Perforated Valentine’s Day cards featuring the stars of these stories!

Now, sure, I’m a romantic, and so I want my love stories full of, you know, love. But there is some deep undercurrent of sadness throughout all of these stories. And in all but two of them, the couple is unable to help each other through their sadness and reach some sort of joy. Did Dan DiDio recently get dumped or something?

Regardless of how this came to be, six stories emerged as part of this one-shot anthology, and so let’s jump right in!

Segment One: “Think it Through” by Ann Nocenti and Emanuela Lupacchino, starring Batman and Catwoman

Batman and Catwoman are a fan-favorite romantic pairing, and an obvious one to kick off this issue. Visually, the story looks pretty nice; Lupacchino doesn’t do anything too unexpected here, but manages to draw a functional Batman and a not-too-cheesecake-y Catwoman, and that’s all you could really ask from her here.

The story itself is a flashback to when these two lustbirds first met, and it involves precious little romance, despite taking place on February 14th. Sure, there are flickers of attraction between them, but to call this story romantic, or categorize it as a love story, is silly.

But the most glaring touch of the story is just how unbelievably wrong Nocenti got Batman’s voice. Batman gives Selina a speech that is basically “stealing is ok, if it is from rich people,” which is insane, and he talks about the family she most likely stole a TV from in a tone that would never ever come from that cowl: “Mom gets the kids up, puts on cartoons. Kids off to school, she’s got her talk shows while she cooks and cleans. End of the day, football game for her man.” Bruce Wayne is a guy basically obsessed with justice, but I doubt he has any idea how the average person lives, nor would he articulate it in quite this way.

This story feels like bad fanfic, which is a shame, because it is illustrated nicely.

This story is the closest to a love story that this book has – weird thing is, it isn’t a love story about Aquaman and Mera. This is a story about Mera finding letters from the original lighthouse owner’s daughter and her sailor lover. This is basically The Princess Bride in comics form. Sure, at the end there is a little Aquaman/Mera business, but most of it has nothing to do with them at all.

The story is well crafted, for what it is, and the art is pretty nice, if not guilty of making Mera a little too buxom and for giving Arthur a creepy Spencer Pratt beard. It just doesn’t make all that much sense to give one of DC’s most enduring couples a love story by proxy.

Here is where the book takes a really odd turn. This story references the recent “Batgirl” Annual, which featured Babs planting a kiss on a one-legged informant kid, in order to save him from being labeled a snitch*. Here, they reconnect, and the informant wants another kiss, and shares his fantasy of them having a real life date. The story itself is written well and shows a side of crimefighting that usually isn’t spotlighted: the loneliness.

However, this is still a really weird plot, and the art does not help. Gopez makes Batgirl look like the type of hero a criminal wouldn’t want to plant one on, which is to say he sort of uglies her up. His action panels all look very stiff and unnatural, and there is no visual chemistry between the two. The story ends with a note letting us know that it will continue in future issues of “Batgirl.” Awesome.

*This plot point doesn’t make a ton of sense to me. Wouldn’t you be more likely to share secrets with the lady you’re dating, rather than just if your brother saw you talking to a superhero?

Just when you thought things couldn’t get weirder, here we are. Kicking things off is the cringe-inducing title “Seoul Brothers,” which is somehow insulting to everyone in the world all at once. This is another classic non-love story where, in fact, Apollo and Midnighter break up. Before that, there’s some mild gay stereotyping, and lots of Simon Bisley wackiness. Bisley is a guy who seems to have a love or hate reputation and, frankly, I can’t say I’m a fan. His characters run the gamut from creepy to insane, and the tone doesn’t fit Milligan’s script in any real way.

While the breakup is acknowledged through captions as being bullshit on both party’s fronts, it is, again, a really odd story to have in your Valentine’s Day special. Props to DC for having a gay couple in one of their stories, though.

This is, hands down, the finest story in the issue. Kyle Higgins has proven time and time again that he truly understands Dick Grayson as a character, and writes a really nice, if also sad, tale for him. Dick meets a bodyguard named Ursa, and after he gets dumped, they eat Chinese food on a rooftop together, sharing anecdotes and flirtation. Their encounter ends on a positive note, that they should meet again.

However, when they meet, she’s pulled a Before Sunrise on him and didn’t show, leaving Dick with a pizza to eat by his lonesome. Beautifully illustrated by Sanford Greene, this is both the sweetest and saddest of the bunch, but since it is a good comic, I can look past the sadness. I would love to see Greene do more with Nightwing, and Ursa seems like a character who could make a comeback at some point.

Before Andy Diggle takes on “Action Comics” in a few months, he gets a crack at writing Superman here, out on a date with Wonder Woman. While this is a flawed story on a lot of levels, it does something no other non-“Wonder Woman” Diana appearance has done: it references her family. Eros is a major player here, and while Brian Azzarello may not like how he was portrayed, it is nice to see that comic not exist on an island. There are a few really weird moments in this story, though:

– Why does Wonder Woman think a bullet will kill Superman?
– Why does a restaurant with spandex clad live music classify as romantic?
Continued below

– Why does Clark almost instantly take his glasses off, exposing literally the only cover he has as to his secret identity?

Robson Rocha does a decent job here, but his work seems a little over the top in a few area and his Clark is noticeably inconsistent. Overall, this is a relatively inoffensive entry into the anthology, and since it is actually about people who care for each other expressing their care for each other, it is probably the most appropriate story for this issue.

Overall, this is a really disappointing issue, and it costs nearly eight dollars, which is highway robbery. Now, granted, it does have Valentine’s Day cards in the back, and one of them made me literally laugh out loud. Many of them have a character on it, along with a punny greeting, like “You put a hex on me,” next to a picture of, you guessed it, Jonah Hex. The best, hands down, is the card that has a heart that reads “The New 52,” and then at the bottom of the card, “You’ve been rebooted as my valentine.” That is a rare bit of self-awareness and humor on DC’s part. If only the rest of the issue was as carefree as that final card.

Final Verdict: 4.8 – Save your money and buy your valentine some flowers or candy (or a better comic)